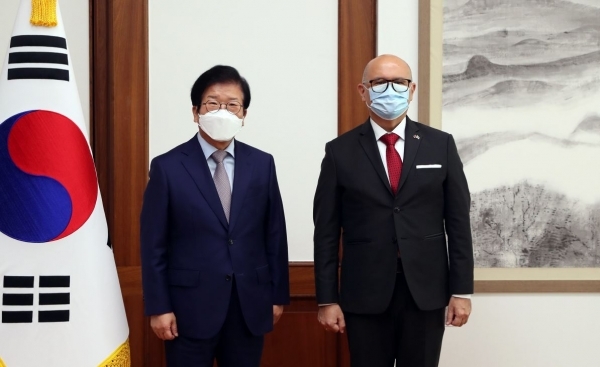 “I learned that Costa Rica is pushing for electric trains in the metropolitan area and e-government projects, Park said during a talk with Solano. I think there are many areas where we can work together as Korea is also pushing for a Digital and Green New Deal policy.”

The Korean Assembly speaker also said, “Since Costa Rica is an environmental and ecological model country, Korea should share its experience on climate change issues,” adding, “I am impressed by President Carlos Alvarado Quesada’s remarks in his State of the Union address that he hopes to call Costa Rica ‘Korea of America.’”

In response, Solano said, “Since the pandemic, Latin American countries have been hit hard. Korea and Costa Rica have a variety of areas to cooperate in areas such as hygiene, economic recovery, green energy and climate change.”

He also invited him to visit the country to celebrate the 200th anniversary of Costa Rica’s independence.

Solano served as ambassador to Costa Rica from Aug. 2015 to June 2019 and met with Park, then head of the Latin American Forum at the National Assembly, in November 2017 and again in July 2018.