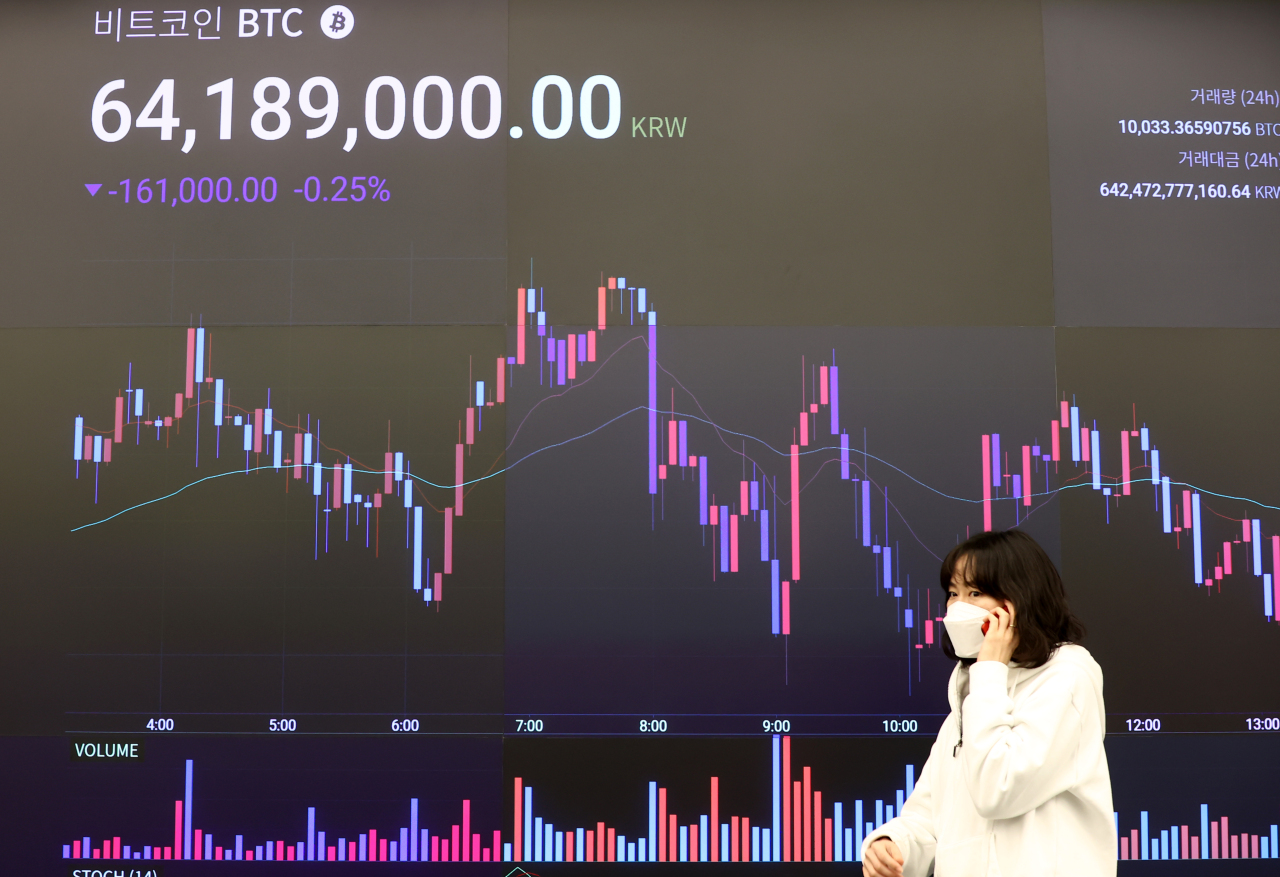 A woman walks past the electronic board of a cryptocurrency exchange in Seoul last Thursday. (Yonhap)

The government is scurrying to implement new rules on users and operators of digital coins to effectively oversee the industry, which has been growing at a fast pace on the back of increasing appetite for risky assets.

Starting from March 25, new penalty standards for cryptocurrency exchanges that infringe anti-money laundering rules will be implemented, according to the Financial Services Commission on Tuesday.

Fines will be imposed on virtual asset service providers that fail to report suspicious activities. They have to make transactions with verified customers and keep separate management of customers’ transaction records.

Those who plan to start virtual asset service must report to the Korea Financial Intelligence Unit under the Financial Services Commission in advance, and existing operators must complete their reporting within six months.

The financial watchdog warned consumers of possible shut down of crypto exchanges as they are required to report their business status to the government under the new rule.

“Customers should check the registration status of the existing operators and whether the business will continue to run before making virtual asset transactions so that they do not suffer damage,” the FSC said in a statement.

While the FSC strengthens control over crypto service providers, the National Tax Service is looking into possible tax fraud committed by customers via cryptocurrency transactions.

Virtual assets, which are held in offshore accounts should be reported to the tax agency if they exceed a particular amount from next year to prevent tax evasion.

According to the agency, offshore virtual asset accounts are included within the scope of foreign account reporting, requiring those who hold more than 500 million won ($440,900) in total in assets including cash, equities, bonds and others.

Those who breach reporting requirements could face a fine of up to 20 percent of unreported or understated assets. The tax agency warned that those who fail to file report on their assets exceeding 5 billion won could face criminal charges and their names would be disclosed to the public.

“It is difficult for the government to identify virtual assets held outside of Korea. Even if we do, there is a limit to forcefully collect tax money … We will continue to seek out supplementary measures to prevent foreign exchanges from becoming places to conceal virtual property,” a NTS official said.

The tax agency has been stepping up its enforcement capabilities on those who hide money in a cryptocurrency to evade paying tax on inheritance and capital gains.

On Monday, tax authorities said that some 2,416 delinquent taxpayers were found to have concealed assets worth a total 37 billion won in bitcoin and other cryptocurrencies.

The set of rules comes as the market value of cryptocurrencies here increased approximately tenfold in just three years.

The Upbit Market Index, which tracks all digital assets listed on the platform of local cryptocurrency exchange Upbit, stood at 9,742.62 points as of 5:45 p.m. Monday, almost 10 times the level of 1,000 points on Oct. 1, 2017, when the index was first calculated.

The surge in the market value comes as prices of cryptocurrencies have risen sharply over the three-year period.

Another Upbit index showed that the market grew rapidly even when Bitcoin, which accounts for the largest market cap and share, was excluded from the calculation.