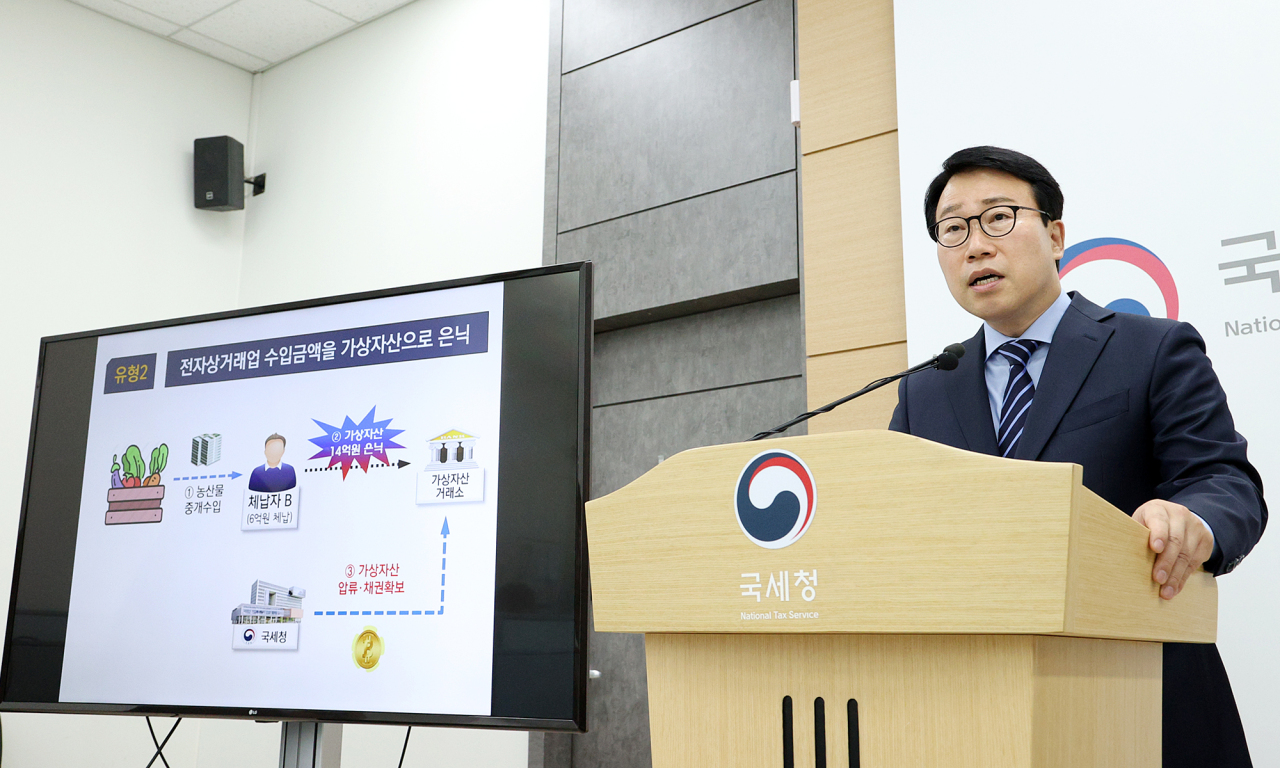 Jung Chul-woo, assistant commissioner for collections, legal affairs and public relations at the National Tax Service, speaks about the agency’s recent probe into assets concealed via cryptocurrencies, at a press briefing in Sejong on Monday. (National Tax Service)
South Korea’s tax agency said Monday that it had caught more than 2,400 individuals who hid assets in virtual currencies to avoid taxation.

The National Tax Service collected data from digital currency exchanges and caught 2,416 tax delinquents who had concealed assets through cryptocurrencies such as Bitcoin, Ethereum and Ripple. The concealed assets totaled 36.6 billion won ($32.24 million), the officials said.

The probe targeted people with over 10 million won in delinquent taxes, and the hidden assets were recovered in the form of cash and bonds. The tax agency has launched further investigations on 222 of those people, who allegedly evaded further tax payments.

The number of cryptocurrency investors rose by 390,000 on-year to 1.59 million this year, but virtual currency transactions averaged 8 trillion won per day, an eightfold increase from last year, NTS data showed.

Bitcoin, the world’s largest cryptocurrency, continued its bull run and topped the 70 million won mark for the first time Sunday. The value of a single Bitcoin reached an all-time high of 71.45 million won a day earlier, and it was traded at nearly 67 million won as of Monday at 4 p.m.

The country’s Supreme Court decided in May 2018 that virtual currencies belong to the class of intangible assets and as such are subject to confiscation. Since then the NTS is the first government institution to carry out forcible collections from those found to have concealed assets.

“The recent probe was a part of our ongoing efforts to strengthen a crackdown on anti-social tax dodging. We will capture highly intellectualized (tax evading) cases and quickly redeem their concealed properties.”

Meanwhile, beginning next January, the government plans to impose a 20 percent tax on profits exceeding 2.5 million won from cryptocurrency investments.