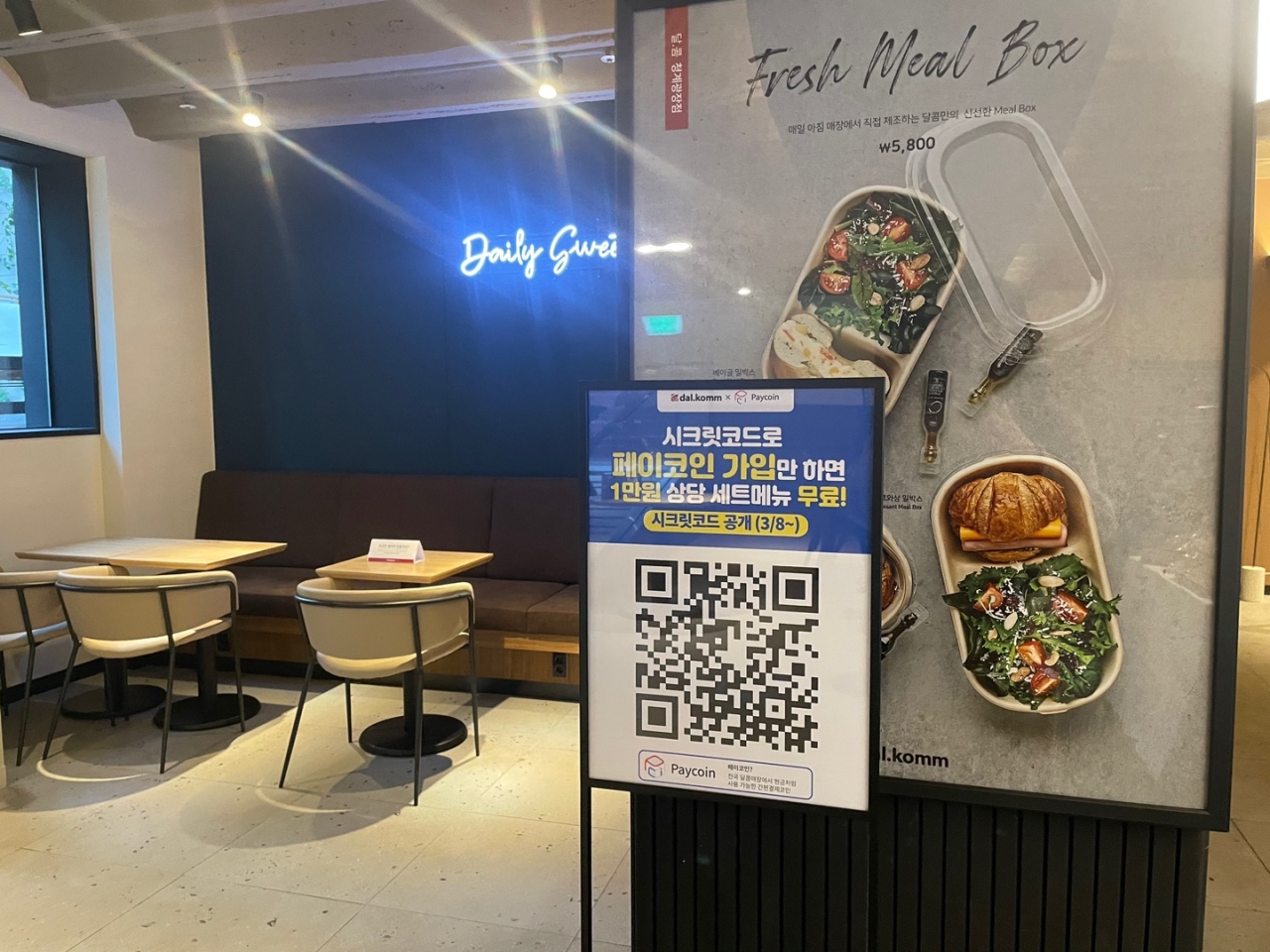 While coffee giants engage in an invisible war, one lesser-known coffee franchise is taking a different tactic, with a signboard that reads, ”Get a free cup of coffee if paying with the cryptocurrency Paycoin.”

A 40-something office worker, identified only by the surname Choi, said he came to the crypto-accepting Dal.Komm after reading the advertisement online. The coffee chain, under the payment solution app Danal, gives out 2.1 paycoins worth 3,000 won ($2.64) when a user signs up for an online membership of the Paycoin app. With the crypto money he received, he paid 0.55 Paycoins worth 1,000 won for a sandwich box with a cup of coffee. Paycoins are digital tokens developed by the company in 2019.

Choi, a crypto investor in a number of digital coins including bitcoin, said he would like to see more retail stores accepting cryptocurrency.

“It is surely a big advantage for me if the prices of bitcoin rise further and if we see more discounts and promotions offered by those crypto-accepting stores,“ he said.

In addition to the free giveaway of Paycoin and a lunch box promotion, Choi decided to visit the coffee shop after reading the news that local payment company Danal plans to allow users to pay with bitcoin via the Paycoin app starting in April and launched a prepaid card in cooperation with China‘s Union Pay that can be used at 30 million locations worldwide via its QR network. The new services will allow users to pay not only in Paycoin and Bitcoin but also outside South Korea.

Backed by many curious retailors like Choi, the company added about 100,000 users for a total of 1.1 million in February, and the number of monthly active users doubled from 200,000 to 400,000 in the month. According to convenience store chain CU, transactions using Paycoin soared a whopping 1,244 percent during the week of Feb. 17 to 24 from the previous week. Danal’s 60,000 partner stores include 7-Eleven, Ministop, and Golfzon for offline purchases and Domino’s Pizza, BBQ Chicken and KFC, with transactions at convenience stores accounting for the largest portion. 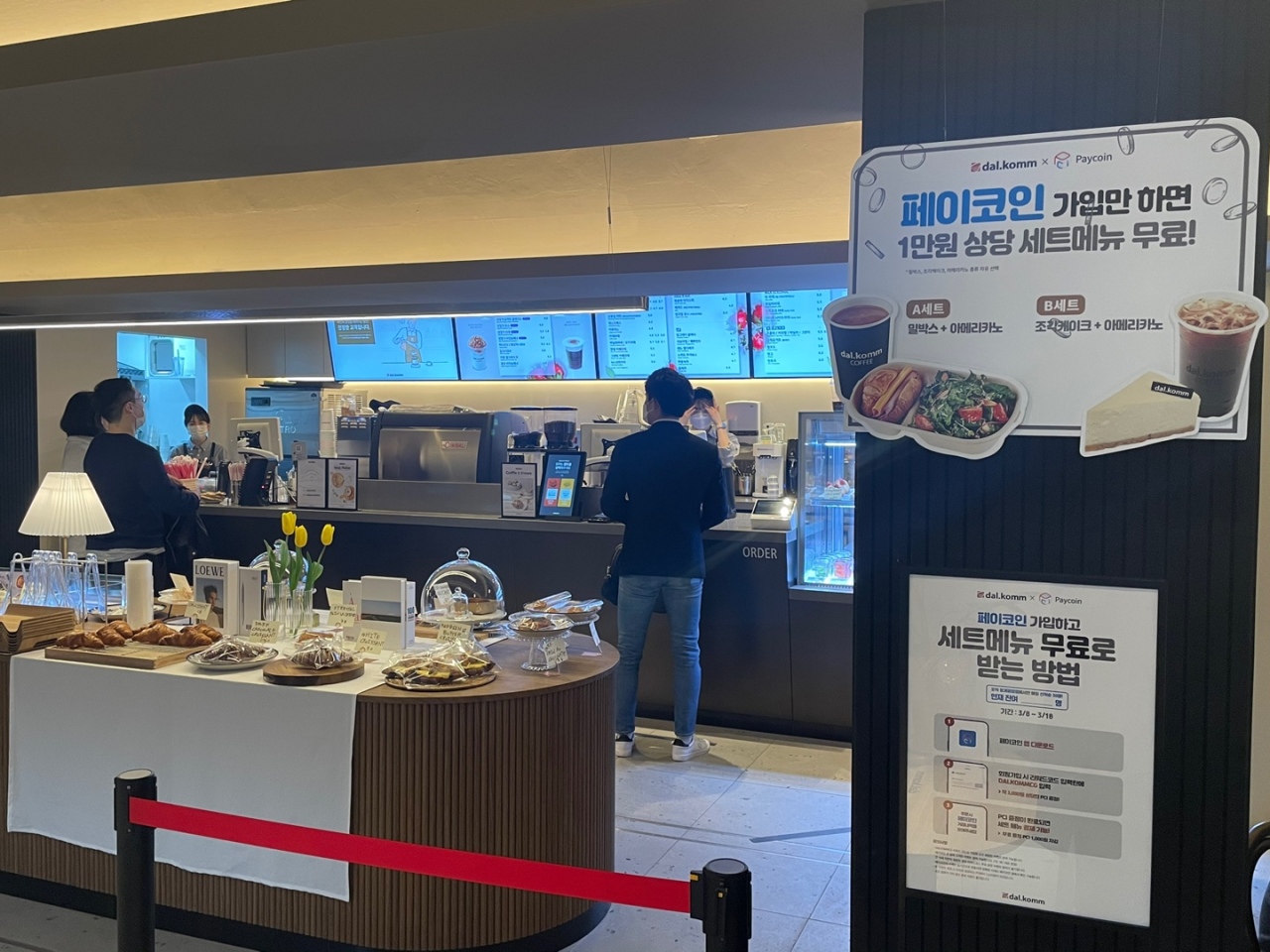 The cafe is one of 60,000 stores that accept the digital token Paycoin, developed by Danal Fintech. (Park Ga-young/The Korea Herald)
Kim Young-il, business strategy team leader of Danal Fintech, believes that the digital currency payment market has the potential to grab some portion of South Korea’s 3,000 trillion won in annual transactions in credit cards and cash.

Danal’s efforts are the latest attempt to use cryptocurrencies as a means of exchange for goods and services in the physical world.

Such efforts have continued for 11 years, since the first-ever transaction took place in the form of 10,000 bitcoins in exchange for two pizzas on May 22, 2010, in Florida -- a day crypto enthusiasts celebrate as “Bitcoin Pizza Day.”

South Korea’s own version of Bitcoin Pizza Day dates to April 2013, when a bakery owner in Incheon briefly accepted bitcoin as payment. Other early adopters joined the movement in a short-lived trend that soon died down when the fad of digital coins faded in early 2018 amid increased regulations.

The legacy of these transactions has been scantily maintained by a few establishments. Only seven out of 50 locations in Seoul listed on Coinmap, which shows places that accept cryptocurrencies, still accept digital coins.

Until now, blockchain platforms have been trying to use digital coins like reward points, but not for buying physical products offline.

For instance, Klaytn, a crypto platform developed by Kakao-backed blockchain arm GroundX can be used when making a donation to organizations such as Good Neighbors.

Yanolja, South Korea’s leading travel platform, released the Yanolja coin, which can be used to pay for services for businesses in the company’s alliance.

Kim of Danal acknowledges the fluctuation of coin prices -- such as the 2,000 percent jump in the price of paycoin in one day on Feb. 17 -- could make some users weary because they cannot exactly foresee how much their digital coin will be worth at a given moment in time. But the issue can be alleviated by discounts offered for transactions and hedging functions digital coins have.

“If cryptocurrencies were the only option to pay, the fluctuation in prices in the short term would be worrisome, but it’s not the case,” Kim added. “People make decisions taking everything into consideration and paying with cryptocurrency provides diverse options to customers.”

By expanding the partner stores and increasing transactions, price volatility will be subdued because it would mean that people will think of the digital coin as more of a means of exchange rather than just betting on the upward movement in price, Kim added.

However, paying the bill with cryptocurrency also faces a barrage of skepticism.

Stressing that cryptocurrencies have zero value as a currency, a researcher at a major capital market research institute, said that the current price volatility is only due to speculative investments.

“Cryptocurrencies cannot play a role as a currency now and that will remain so,” the researcher, who wished to remain anonymous, said.

Another industry expert said that digital coins could be used as a major currency just as Citi research predicted last week, but it would take quite a while until then. There are myriad issues to be addressed, ranging from making a stable system to accounting and tax issues, the expert added.