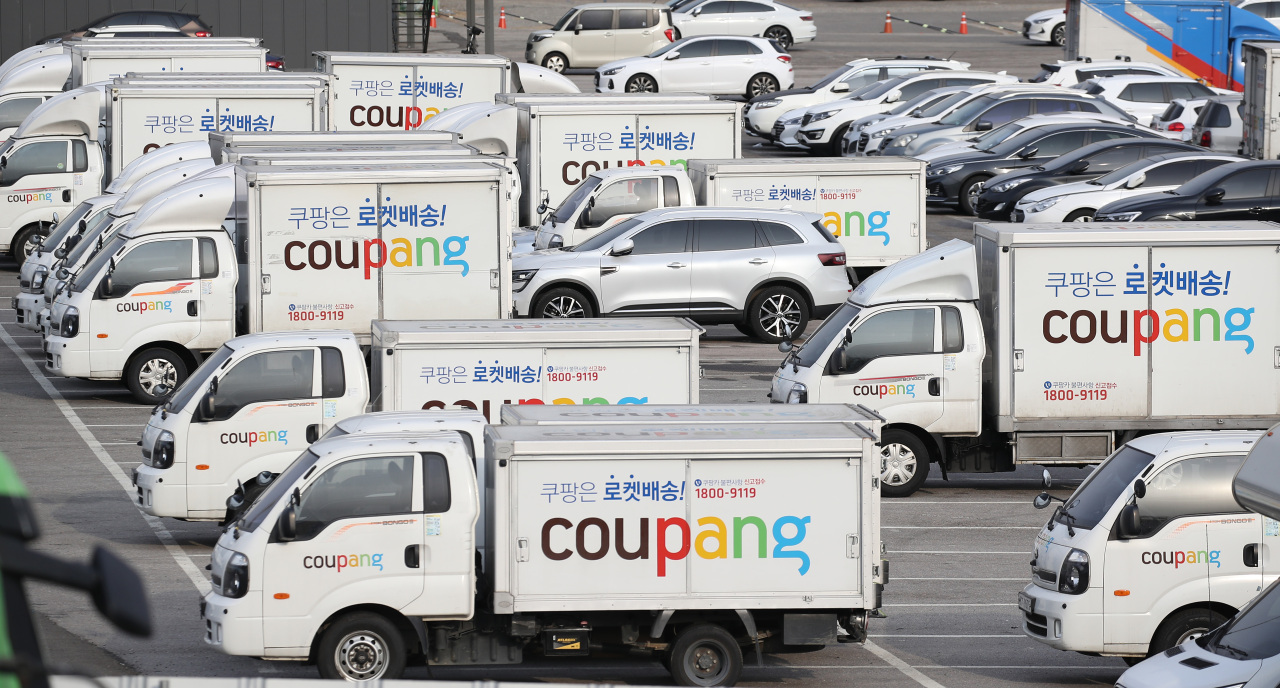 Coupang’s delivery trucks at a parking lot in Seoul. (Yonhap)
Coupang Inc., the parent company of South Korean e-commerce giant Coupang Corp., said it will offer shares of its US initial public offering at $35 apiece, raising its market value to around $63 billion.

Based on the fixed share price, the firm will raise $4.55 billion in funding, and it would start trading from Thursday there. Coupang said it has submitted a regulatory filing to the US Securities and Exchange Commission and has received approval from the commission.

The company‘s estimated valuation of $63 billion on US market surprised many as it means it would make it the third largest South Korean company by market value, when compared to the large-cap stocks on the nation’s main bourse Kospi.

However, market watchers here say Coupang would not likely have reached the estimated market valuation if the IPO had taken place on the nation’s main bourse Kospi.

As the outstanding share price becomes official, Coupang’s IPO is the biggest deal on the US market so far this year, having doubled the size of previous record-holder dating app Bumble’s $2.15 billion last month.

Coupang aims to offer 130 million shares, up from its previous plan of 120 million shares -- including 100 million new Class A shares in the IPO on the New York Stock Exchange and 20 million shares to existing investors -- at a target price band of $32-34 apiece, according to the prospectus submitted a day earlier. Previously, the share price announced on March 1 had been estimated at an initial $27 to $30.

With Coupang’s market debut on the New York Stock Exchange, not only the company’s chief executive Kim Bom-suk but also Japanese billionaire and SoftBank founder Masayoshi Son is poised for a windfall from the IPO.

The Japanese conglomerate’s venture capital firm SoftBank Vision Fund Investments -- the biggest shareholder of Coupang -- will hold about one-third of the firm’s shares after the offering. Based on that calculation, SVF Investments will generate a profit worth about $20 billion among the totaled valuation.

Amid the lingering COVID-19, demand for online shopping and delivery services has been skyrocketing under social distancing restrictions. Following its subsidiary’s fast-growing business based in South Korea, Coupang’s sales jumped during the pandemic.

The company’s net sales surged 91 percent on-year to $11 billion last year. It has never been in the black but the net losses narrowed to $567.6 million from $770.2 million marked in the previous year, according to its prospectus.

Meanwhile, Coupang shares will be traded on the NYSE under the symbol CPNG. Goldman Sachs Group, Allen & Co. and JPMorgan Chase & Co. are serving as the lead underwriters of the IPO deal.