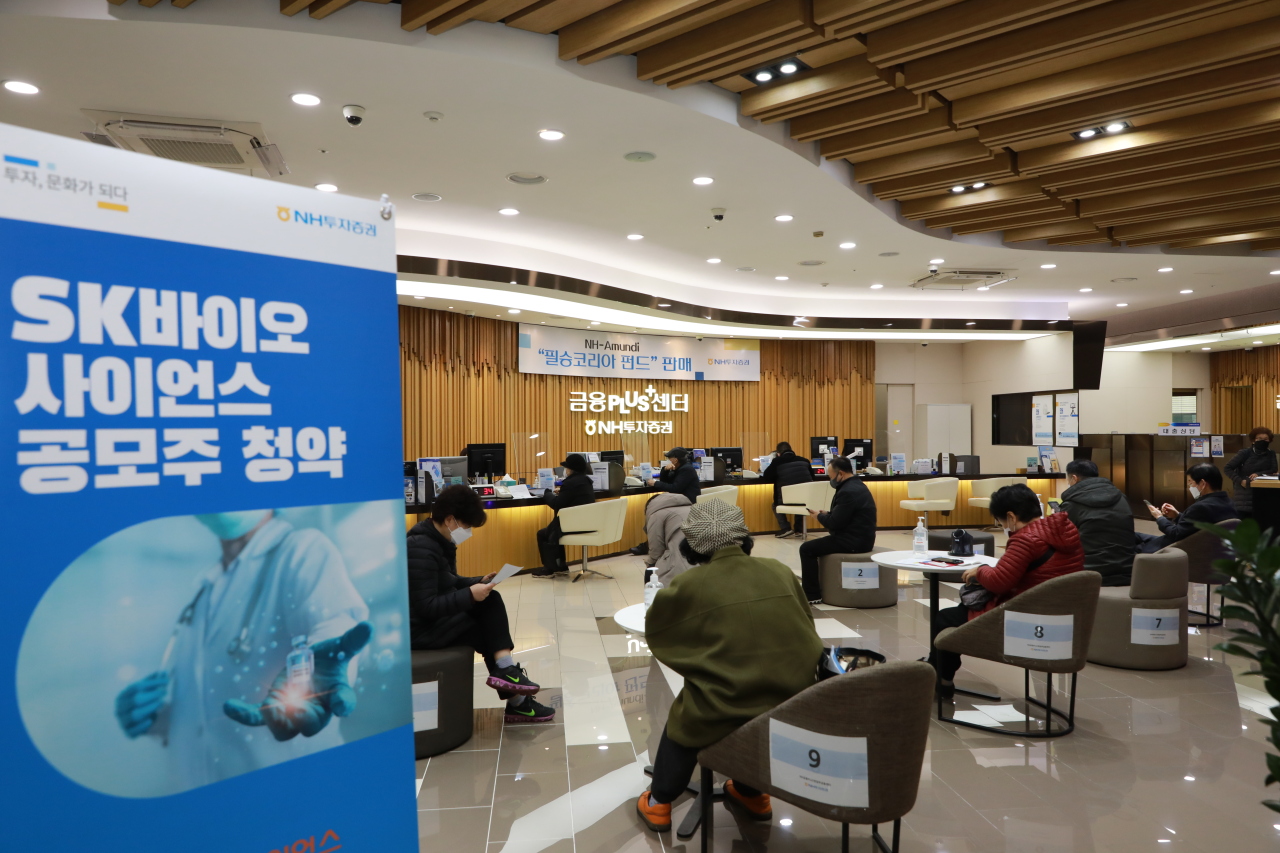 Potential investors wait at a brokerage office in Seoul to apply for the two-day retail tranche of SK Bioscience shares on Wednesday. (NH Investment & Securities)
South Korean investors have showed heated interest in the imminent market debut of SK Bioscience as they poured nearly 64 trillion won ($56.06 billion) of deposits in the two-day public subscription period for the local vaccine maker’s stocks.

Reflecting investors’ thirst for financial income and high market liquidity, retail traders bought about 63.62 trillion won in deposits by the deadline at 4 p.m. on Wednesday. The amount surpassed not only one of the last year’s biggest deals Big Hit Entertainment with 58.42 trillion won, but also exceeded the previous all-time record set by Kakao Games at some 58.55 trillion won in September.

On the first day of the preorder session, the bid in retail subscriptions came to 14.15 trillion won. Due to potential investors’ thirst for expanding financial assets and abundant liquidity, they rushed to submit more deposits on the last day of the retail tranche, according to data compiled by the members of the underwriter group of SK Bioscience.

Overall, the shares were oversubscribed 335.36 times. While NH Investment & Securities received retail subscriptions as the lead underwriter of SK Bioscience’s initial public offering, competition at the brokerage marked 334.32 to 1. Competition at two other members of the underwriter group, Korea Investment & Securities and Mirae Asset Daewoo, came in at 371.54-to-1 and 326.33-to-1, respectively.

Following the financial authorities’ revised scheme rolled out in November last year, the IPO share allocations to small investors have been increased to 30 percent, from the previous 20 percent. Some 5.73 million shares, or 25 percent of SK Bioscience’s total offering, are being sold to retail investors under the planned IPO.

Ahead of the market debut on the nation’s main bourse Kospi on March 18, SK Bioscience’s book building competition marked 1,275.47-to-1, the most competitive result among newly listing firms on the Kospi. The share price has also been fixed at the top end of its indicative price range at 65,000 won.