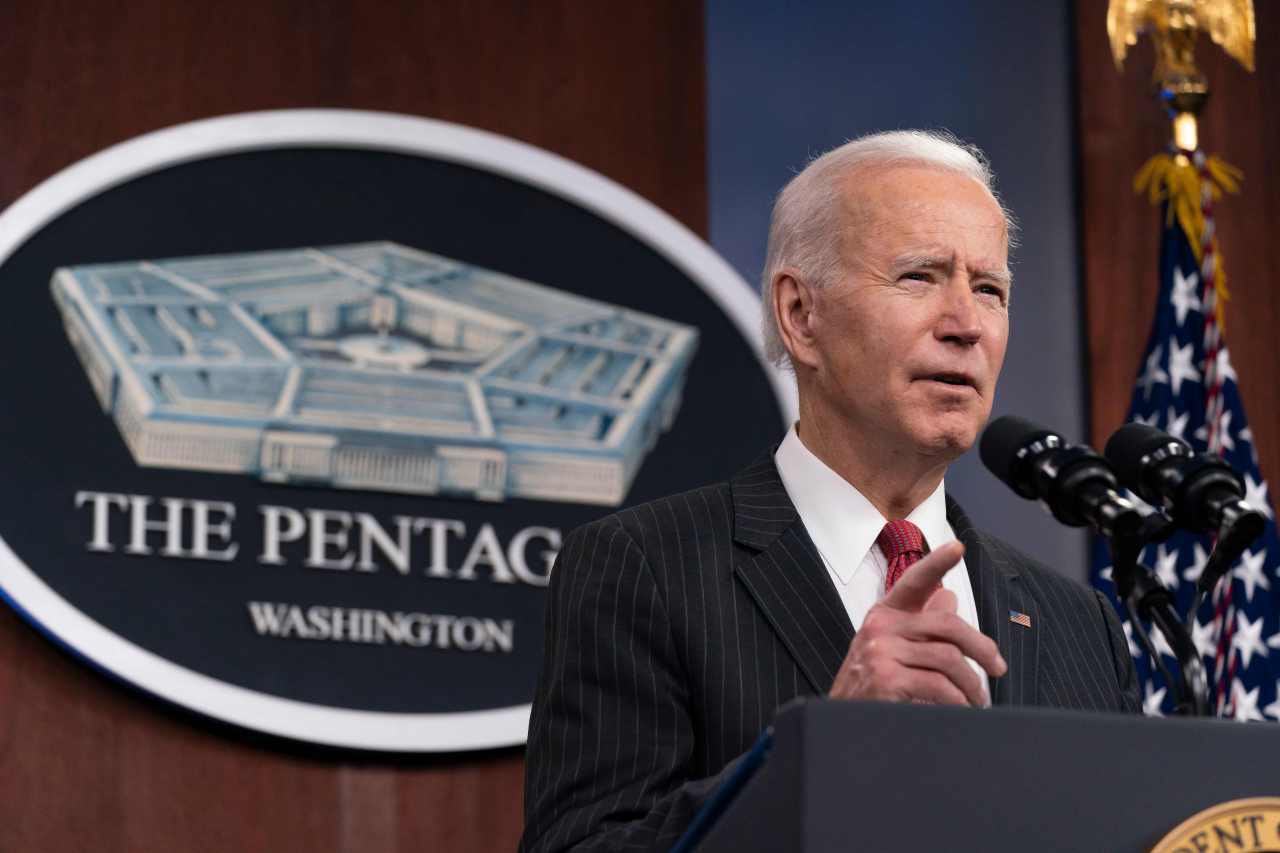 US President Joe Biden speaks at the Pentagon in Washington, DC. (AFP-Yonhap)
WASHINGTON -- South Korea may be considering joining a US-led regional forum that it had previously shunned, in an effort to influence US policy toward North Korea, a member of South Korea's presidential policy advisory group said.

Hwang Ji-hwan, a member of the president's commission on policy planning, said the Seoul government, just like the US government, does not aim for a sudden or complete removal of sanctions on North Korea but to do so gradually through a process of diplomacy and negotiations toward denuclearization.

"Seoul is thus trying to coordinate and influence the Biden administration's North Korea policy review process. South Korea is aware that the new administration has a host of domestic and foreign policy priorities more important to Washington than North Korea," the international relations professor from the University of Seoul said in an op-ed published by US magazine The Hill.

"The South Korean president believes it is his duty to lay the groundwork for a sustainable inter-Korean reconciliation process," he added in the article, co-authored by Ramon Pacheco Pardo, Korea chair at Vrije Universiteit Brussel and associate professor in international relations at King's College in London.

The two insisted the Moon Jae-in government welcomes the Biden's administration's focus on diplomacy and working with allies, not only when it comes to North Korea but all diplomatic issues.

"But for Seoul, the real proof of improved US-South Korea relations will be in the North Korea 'pudding'," they wrote.

The authors noted the Seoul government may wish that the US would quickly wrap up its ongoing North Korea policy review and engage with North Korea.

"So it wants to make sure that the policy review process does not drag on for months on end. Or worse, that it ends up with a decision to pursue 'strategic patience 2.0,' " they said, referring to the North Korea policy implemented by the former Obama administration, which they said "essentially kicked the can down the road, allowing North Korea to further develop its nuclear program.

"But the Biden administration might be tempted to revive President Obama's policy anyway, given its many other foreign policy concerns. This would be a disaster for Seoul."

The two argued Seoul was "even pondering" whether to join the so-called Quad Plus to show its commitment to the US-South Korea alliance and "indirectly, influence Biden's North Korea policy."

Seoul has been reluctant to join the group of currently four countries -- Australia, India, Japan and the United States -- which the former Trump administration had the rest of the world believe was an anti-China forum.

"South Korea had no incentive to join an anti-China quad. But the Biden administration wants to shift the Quad toward a group of like-minded countries," said the authors.

"This is more to the liking of the Moon government, which could see membership of a Quad Plus as a means to further strengthen links with the US and gain support for some of its foreign policy goals," they added.

They argued diplomacy and negotiations are the only realistic way to rein in North Korea's nuclear program.

"This does not necessarily mean moving away from containment or the sudden withdrawal of sanctions, which neither Washington nor Seoul advocate. But it does mean engaging in a sustainable diplomatic process involving working-level talks and a step-by-step approach. For the South Korean government, the Biden administration brings hope that Washington will try to walk down this path," they said. (Yonhap)