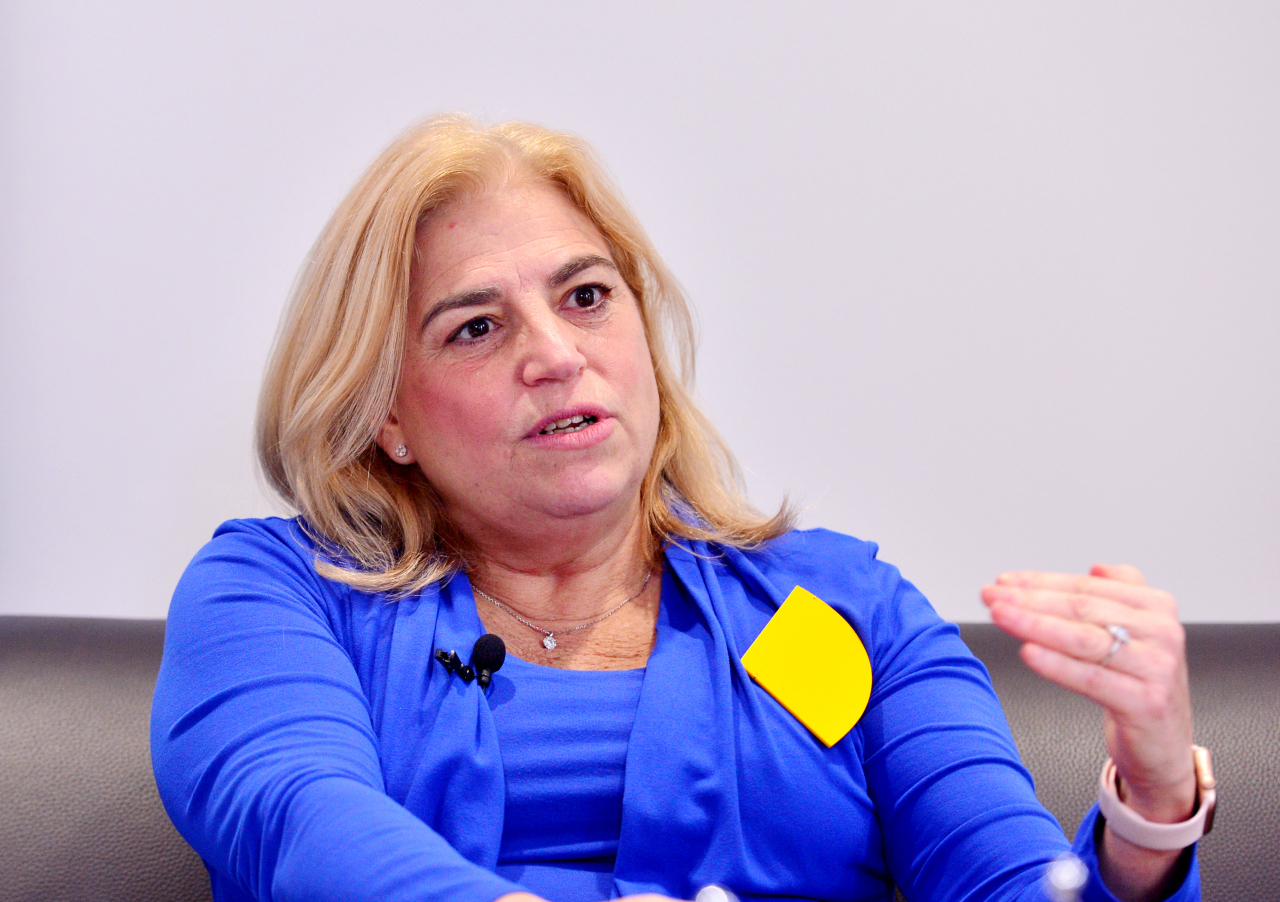 Maria Castillo Fernandez, EU ambassador to South Korea, speaks during an interview with The Korea Herald at her office in central Seoul. (Park Hyun-koo/The Korea Herald)
Last year South Korea pledged to invest more in clean energy and green infrastructure, and to achieve carbon neutrality by 2050 -- ambitious climate goals for one of the world’s key emitters.

It is time for Korea to turn its words into action by devising a concrete road map and bringing an end to financing for overseas coal plants, according to the top representative of the European Union here.

“In less than a year, Korea politically committed to doing a lot of things for climate,” Maria Castillo Fernandez, EU ambassador to Korea, said during an interview with The Korea Herald at her office last week. It was her first interview with a Korean media outlet since she assumed her role in September.

“We are happy that Korea joined other nations in this cause. How do you put that into action? That is the tricky part. We would like to see Korea coming up with more details,” she said, adding that binding legislation is needed.

In July the Moon Jae-in administration announced its Green New Deal policy, which would invest 73.4 trillion won by 2025 to increase supply of renewable energy, create green infrastructure and fostering eco-friendly industrial sectors. In October it also committed to reaching net zero emissions by 2050.

This means that Korea, the world’s seventh-biggest emitter of carbon dioxide in 2017, needs to drastically reform every major sector of its economy from energy generation to manufacturing. The country still relies heavily on fossil fuels, which accounted for about 40 percent of its electricity generation in 2019. Renewables delivered only 6.5 percent of its electricity.

Despite its climate pledges, Korea’s green initiative has drawn criticism for lacking a clear plan of action and a timeline to achieve its goals. It has also faced mounting pressure to stop investing in overseas coal plants, including in Indonesia, Bangladesh and Vietnam.

The EU, for its part, has unveiled the European Green Deal in late 2019, a new growth model to make the continent carbon-neutral by 2050. It aims to transform its economy into clean economy, with the member states working to incorporate the climate pledges into law.

This came amid widespread public support among Europeans for climate actions. Some 93 percent of EU citizens saw climate change as a serious problem and 84 percent was in favor of financial support for the transition to clean energy, according to a 2019 survey by the European Commission.

“In Europe, it was driven, perhaps bottom up,” she said. The push for environmental actions was driven by citizens and at the same time by businesses seeking to cater to consumers’ demand for sustainable products. This pressured the government and politicians to address the climate emergency, she added.

The top EU envoy said that she is witnessing the similar path here in Korea, with civil society pushing the government and businesses to act more boldly.

“I didn’t think in Europe it could change that quickly. It can even change after one election. When the public start pushing, politicians start acting,” she said.

And there came the pandemic to put the well-being of people and the environment together, Castillo Fernandez said.

“When the pandemic will fade out, climate will still be there. So this is the fight of our lives, the fight of our children for the next generation. And this is something that doesn’t have any vaccine. We don’t have a climate vaccine,” she said.

What Korea could adopt from the European Green Deal may be its Just Transition mechanism, she said, a key tool to ensure that the green transition happens in a fair way. It provides targeted support and incentives to workers, sectors and regions affected more by the disruptive changes.

“You have to put in place policies that leave no one behind. That’s most important,” she said, stressing “fairness and solidarity.”

The Spanish diplomat, who worked as deputy head of mission at the EU delegation here between 2005 and 2008, returned to the country after 12 years, this time as head of the delegation. She presented her credentials to President Moon Jae-in in February.

“Korea is now very developed,” she said, comparing it with 12 years ago. “Korea is looking to lead technological innovation and transformation. It is also spreading its creativity and culture, which (I think) has been a bit hidden before.”

The next step for Korea should be empowering women to participate more and tackling gender inequality throughout all sectors of society, she said, in a way that mirrors the country’s level of economic development.

“You see women as always very much in universities. But you don’t see women in high-level positions,” she said. “I can still see a lot of social hurdles that do not allow women to develop themselves and be able to work the same way as men in companies.”

But as Koreans are opening up more and younger people are driving social changes, she can see changes coming to the country, albeit slowly, she said.

Looking ahead to the 10th anniversary of the Korea-EU FTA this year, she called it a “win-win” situation. Korea is the EU‘s eighth-largest export destination for goods, whereas the EU is South Korea’s third-largest export market. Bilateral trade totaled $108.6 billion in 2019, up 17.8 percent from 2010, according to the South Korean Trade Ministry.

“We now need to focus on implementing it (the FTA) fully,” she said, adding she hopes to see full implementation of the agreement in such areas as procurement and sustainability.

As Korea and the EU emerge from the coronavirus crisis together, she highlighted the need for greater cooperation for green- and digitalization-focused recovery in sectors ranging from transport and energy to security and people-to-people exchanges, she said.

“We are interdependent. We are not safe until we are all safe. We need to work together in solidarity,” she said.