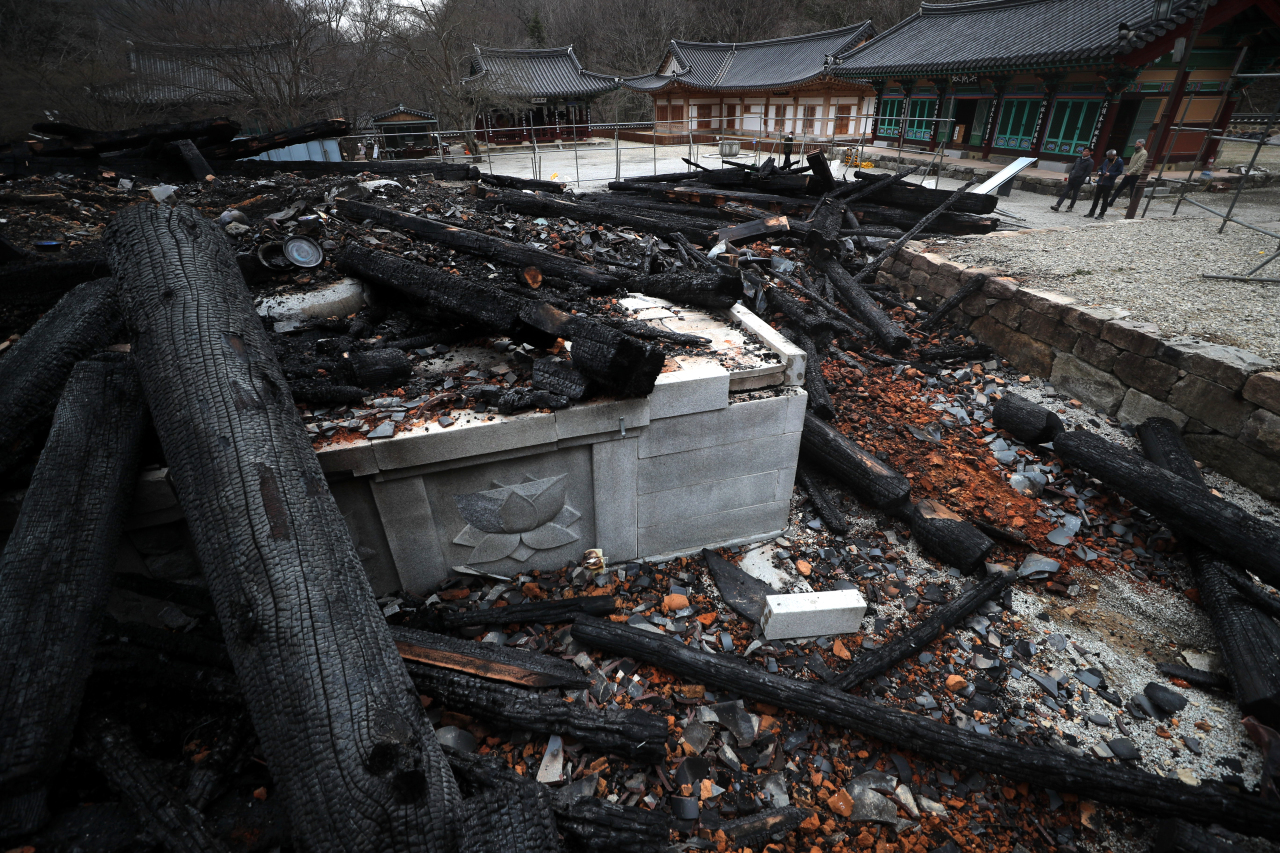 This photo shows the charred remains of Daeungjeon, the main hall of the temple Naejangsa in Jeongeup, North Jeolla Province, on Sunday. (Yonhap)
While the main hall at Naejangsa, one of the country’s oldest Buddhist temples, burned down Friday in a suspected arson attack, a monk representing the temple denied the claim that there was a disagreement between the monks there.

According to reports citing local police, the fire at Naejangsa in Jeongeup, North Jeolla Province, was reported Friday at 6:37 p.m., a few minutes after it is believed to have started. A Buddhist monk reportedly called the fire authorities and was apprehended at the scene, apparently under the influence of alcohol.

The Ven. Dae-u, another Buddhist monk at the temple, said Sunday that no one admitted to having a disagreement with the suspect.

“The suspected monk had tea with a monk from another temple at about 4 p.m. He said he was thankful that everyone at Naejangsa has been nice to him. I could not know why he did such a thing only two hours later,” the Ven. Dae-u told press.

The suspected arsonist, 53, who joined the temple about three months ago,reportedly confessed to police that he had set fire to the temple’s main hall, Daeungjeon, as he was upset after a disagreement with other monks. Police suspect the use of flammable materials.

The entire structure of Daeungjeon, the main wooden hall that houses the statue of Buddha, was lost in the fire, resulting in approximately 1.7 billion won ($1.51 million) in damages, according to fire authorities. The fire did not spread to the nearby mountain, Naejangsan.

“Even before the scar from the fire nine years ago healed, another fire broke out at Daeungjeon. There were news reports that a monk at the temple set the hall on fire intentionally,” said a statement released Saturday by the Jogye Order of Korean Buddhism.

“The action of a Buddhist monk intentionally setting Daeungjeon on fire can never be justified. It is an action that goes against the moral principles of Buddhism,” the announcement said. “We sincerely apologize to the people and to the Buddhist community.”

The monk will receive the highest level of disciplinary action allowed under the Jogye Order’s rules, the statement said. The Jogye Order also called for a thorough police investigation of the case.

Naejangsa occupies the former site of Yeongeunsa, a temple that was founded in 636 and rebuilt in 1639 after burning down in 1592 during the Imjin War with Japan.

The main hall at the temple burned down again in 1951 during the Korean War and was rebuilt in 1958. But it was again destroyed in 2012 in a fire set off by a short circuit.