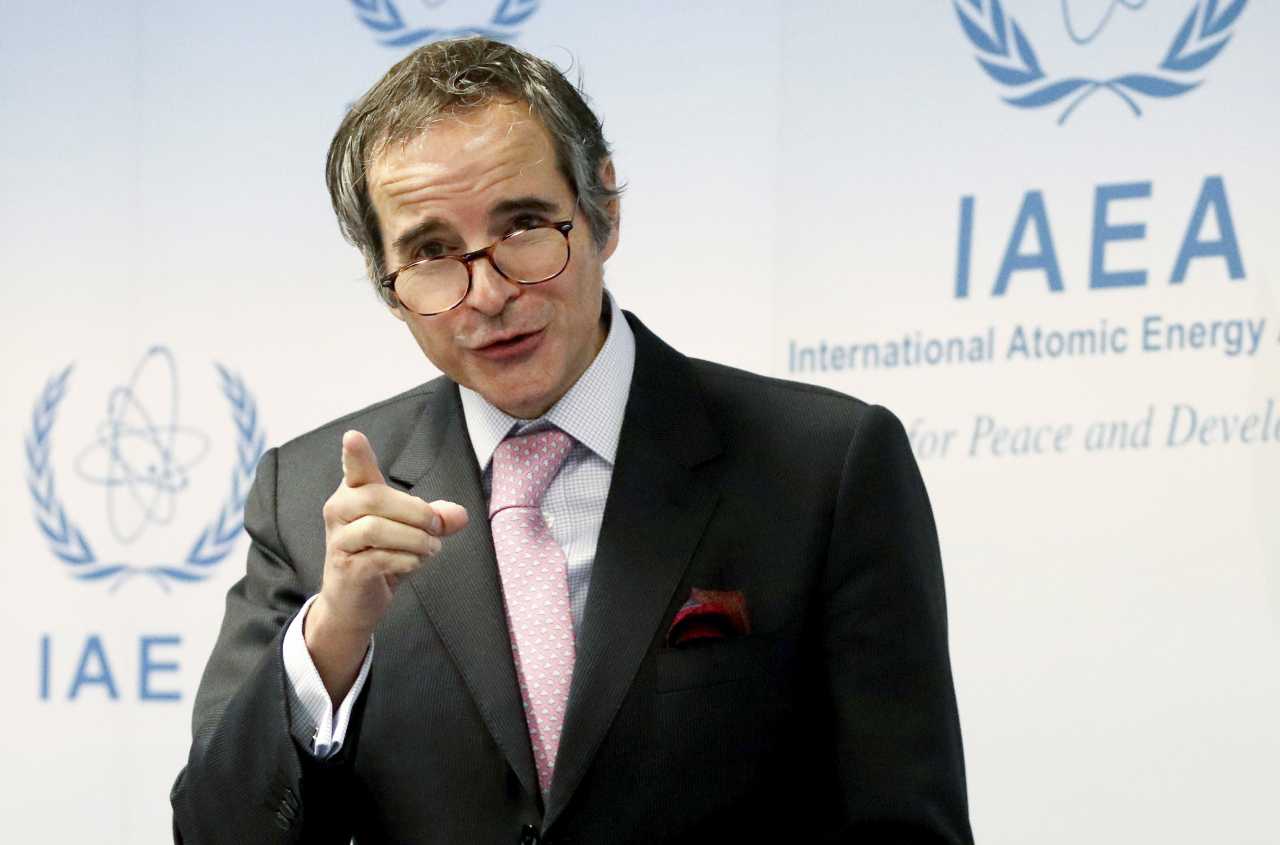 Director General of International Atomic Energy Agency, IAEA, Rafael Mariano Grossi, addresses the media during a news conference behind plexiglass shields after a meeting of the IAEA board of governors at the International Center in Vienna, Austria, Monday. (AP-Yonhap)
Signs of activity have recently been detected at some North Korean nuclear facilities, the UN nuclear watchdog chief said Monday, expressing “serious concern” at the reclusive regime’s continued activities.

Rafael Grossi, director general of the International Atomic Energy Agency, told the board of governors that there was evidence that the regime has continued construction at an experimental light-water reactor at its main Yongbyon nuclear complex, including testing of the infrastructure for cooling water in late 2020.

He added that while there were no signs of producing enriched uranium at the reported centrifuge enrichment facility at Yongbyon, there are ongoing indications of activity at another facility in Kangson, just outside of Pyongyang.

The Kangson site has long been suspected as the regime’s clandestine facility for uranium enrichment, or fuel for nuclear bombs. But 38 North, a US-based North Korean monitoring website, reported in December that Kangson may not be a uranium enrichment plant, but is dedicated to producing related components for enriching uranium.

At the Yongbyon complex, Grossi said there were no signs of operations at the 5-megawatt nuclear reactor -- the country’s main source of weapons-grade plutonium -- and of enriched uranium production at the reported centrifuge enrichment facility there. But there were indications of operating the stream plant that serves the radiochemical laboratory.

Grossi stressed that the North’s nuclear activities remain a “cause for serious concern.”

“The continuation of the DPRK’s nuclear program is a clear violation of relevant UN Security Council resolution and is deeply regrettable,” he said, using the acronym for the Democratic People’s Republic of Korea, the North’s formal name.

“I call upon the DPRK to comply fully with its obligations under Security Council resolutions, to cooperate promptly with the Agency in the full and effective implementation of its NPT Safeguards Agreement and to resolve all outstanding issues,” he said, referring to the Nuclear Nonproliferation Treaty.

Pyongyang expelled IAEA inspectors in 2009, and since then the agency has monitored the country’s nuclear program through open-source information and satellite imagery. North Korea’s last and largest nuclear test was in 2017, when it claimed to have successfully tested a hydrogen bomb.

Meanwhile, the newly minted US ambassador to the UN said Monday that North Korea continues to pose a serious threat to peace and security for the world, and that the US will keep pressing the regime for denuclearization.

“We do believe that North Korea constitutes a serious threat to our peace and security and to the globe. And so we have a vital interest in trying to deter North Korea toward that goal, and also in defending against its provocations or use of force,” Ambassador Linda Thomas-Greenfield said during her first press conference. “President Biden has made clear that we’re going to engage in a principled diplomacy, together with our allies and partners, and we will keep pressing toward a denuclearized North Korea.”