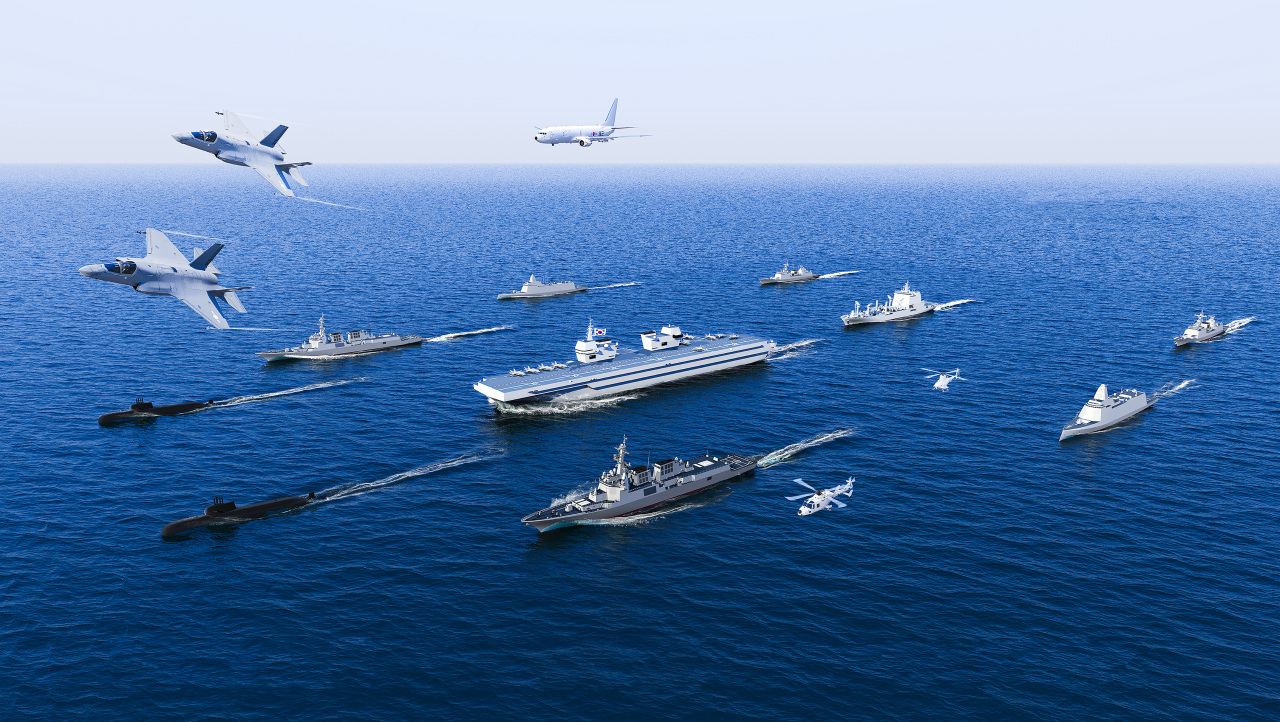 An illustration of a carrier battle group. (South Korea’s Navy)
South Korea’s Navy saw its yearslong dream come true on Feb. 22, when the Ministry of National Defense approved a plan to build the nation’s first light aircraft carrier by 2033. But experts say that the Navy could do better to assure the skeptics opposing the 2 trillion-won ($1.8 billion) project.

First discussed in 1996, the project is strongly backed this time by a united Navy, with its chief appealing to the public that the weapon would help South Korea to put North Korea in great check until a peace treaty replaces the armistice that ended the 1950-53 Korean War.

“A light aircraft carrier is the only asset that can combine our military capabilities at sea. Its very presence deters aggression from North Korea,” Navy chief Boo Suk-jong said at a seminar on Feb. 4, adding it also advances the national status.

But, Jung Ho-sub, a retired Navy chief who served from 2015 to 2016, was wary of Boo’s support for the project, which Jung said could unnecessarily upset Korea’s neighbors.

“An aircraft carrier does not resolve security concerns all so easily. It will be placed under constant scrutiny of (Korea’s) neighbors,” Jung said, referring to Russia, China and Japan.

The project seems also financially unsound, according to Rep. Shin Won-sik of the main opposition People Power Party, who previously served as vice chairman of the Joint Chiefs of Staff.

“If we make one (an aircraft carrier), it will elevate our status, yes. But the project will cost us a lot. So is this really that urgent?”

Shin said maintenance costs will drain the government finances in years to come, since an aircraft carrier -- a seagoing air base that needs support -- would require a naval fleet to project optimal air power.

Experts said the military should be more forthcoming about why it is really pursuing the weapon, despite potential friction with neighbors and massive costs expected over the next decade.

Bruce Bechtol, a retired US Marine who worked at the Defense Intelligence Agency, said South Korea would not have to worry about straining ties with either China or Japan because they either have a carrier or plan to make one.

“It takes many years to build a project of this kind. Thus, getting started now is quite important.”

Yang Uk, an adjunct professor of national defense strategy at Hannam University, said the weapon project offers a unique opportunity for the military to expand its naval power and security ties to the outside world at the same time. This alone is worth the costs or could even offset them, Yang noted.

“Why not say that more often and stop fixating on the North Korean threat?” Yang said, saying the military has to think beyond North Korea if it really wants skeptics to get behind the contentious plan.

Yang, who referred to global maritime warfare exercises, said once the aircraft carrier is built, South Korea would finally be invited to take part in such a gathering, where it could not only hone new skills but seek new security partners.

Meanwhile, other experts pointed out that the Navy had already set aside its budget to have advanced destroyers, attack submarines and frigates to go with the homegrown aircraft carrier when it is rolled out, so extra cash would not be needed to complement the project, as opponents claim so.

“To me, the upside is clear but it just hasn’t come across as salient from the Navy,” Yang said.