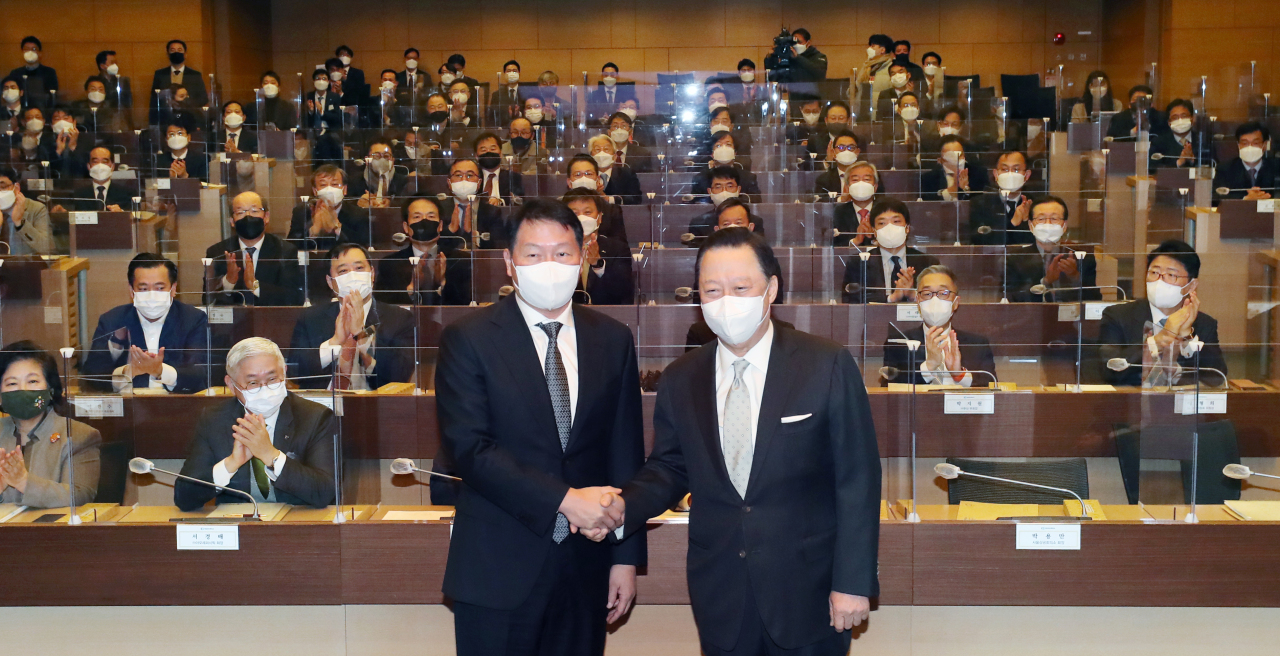 His rise to the role came while SK Group is facing a number of challenges in the arena, including its battery and energy affiliate SK Innovation’s recent defeat in the yearslong legal battle against LG Energy Solution in the United States.

The Seoul Chamber of Commerce and Industry, the regional branch of KCCI, on Tuesday held a general meeting at the KCCI headquarters in central Seoul and confirmed Chey as its 24th chairman.

Under given practices, Chey was automatically put forward for the nationwide KCCI chairmanship -- a nomination that will be finalized at the KCCI meeting slated for March 24. He will be serving an initial term of three years and may be reappointed once.

“I have had many thoughts and worries about assuming this post in these difficult times, but I shall render my humble service as KCCI chief,” Chey said in an acceptance speech.

“(But) I cannot perform this job alone. I shall work together with many people to establish a new business ecosystem, a future for the country, and an environment for the future generation,” he said, referring to the market turbulence caused by the COVID-19 pandemic last year and the uncertainties expected during recovery down the road.

His remarks were also seen as a reflection of a continued call to boost social value, sustainable growth, and a green drive. SK Group, which finds its root in the petrochemical business, has said that it would sell off its petrochemical subsidiary SK Global Chemical as part of its vision to unload carbon-intensive assets.

The new chief, however, refrained from commenting on any incumbent agendas -- including speculations that some of the conventional business chambers may be integrated for efficiency’s sake.

“I am not yet well aware of the details,” Chey said in response to a related question.

With Chey in power, the KCCI will be led by one of the so-called Big Four chaebol -- Samsung, Hyundai Motor, SK and LG. SK Group is South Korea’s third-largest conglomerate in terms of assets as of 2020.

The SK chief will be replacing incumbent Chairman Park Yong-maan, who has served the post for more than seven years. Park first took the top post in August 2013 to fill in for then-chief and CJ Group Chairman Sohn Kyung-shik and served for two consecutive terms afterwards.

While the initial list of potential successors had included LS Group Chairman Koo Ja-yeol and Celltrion Chairman Seo Jung-jin, Chey was considered the most plausible choice -- in terms of market influence and in light of the growing calls for sustainability agendas. '

Under Chey’s leadership, SK Group has expanded its assets to more than 200 trillion won ($180 billion) from 32 trillion won in 2016. Its ranking among conglomerates climbed up from fifth to third, almost catching up with runner-up Hyundai Motor Group in 2019.