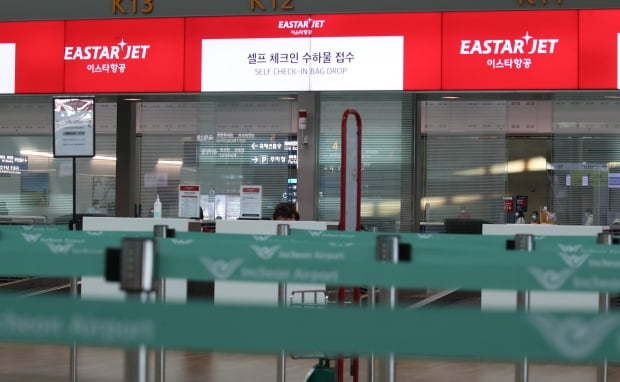 Eastar Jet’s check-in counter at Incheon Airport (Yonhap)
South Korea’s troubled low-cost carrier Eastar Jet, which filed for court receivership last month, could be back in the sky as soon as June amid increased chances of a deal.

According to industry sources, the number of potential buyers -- including a private equity fund and a construction company -- has risen from four to six or seven, with the acquisition process set to be finalized by late May.

Earlier this month, the Seoul Bankruptcy Court allowed the airline to initiate corporate rehabilitation proceedings, appointing two managers, including Eastar Jet CEO Kim You-sang, to oversee the process. The move, coupled with downsizing due to the COVID-19 restrictions, may have raised interest in the airline among potential buyers.

Eastar Jet is currently negotiating an acquisition deal through a “stalking-horse bid” -- a process in which a bankrupted company seeks a new buyer from a pool of bidders while already having an initial bidder in order to maximize the value of its assets.

Founded in 2007, Eastar Jet had served 20 million passengers by 2016, flying to multiple cities including Busan and Jeju as well as destinations in Japan, China and Thailand.

But the prolonged pandemic saw the airline lay off over 600 staff last year. Jeju Air’s decision to drop its plan to acquire the troubled airline earlier that year was a further blow, forcing it to search for a new buyer.