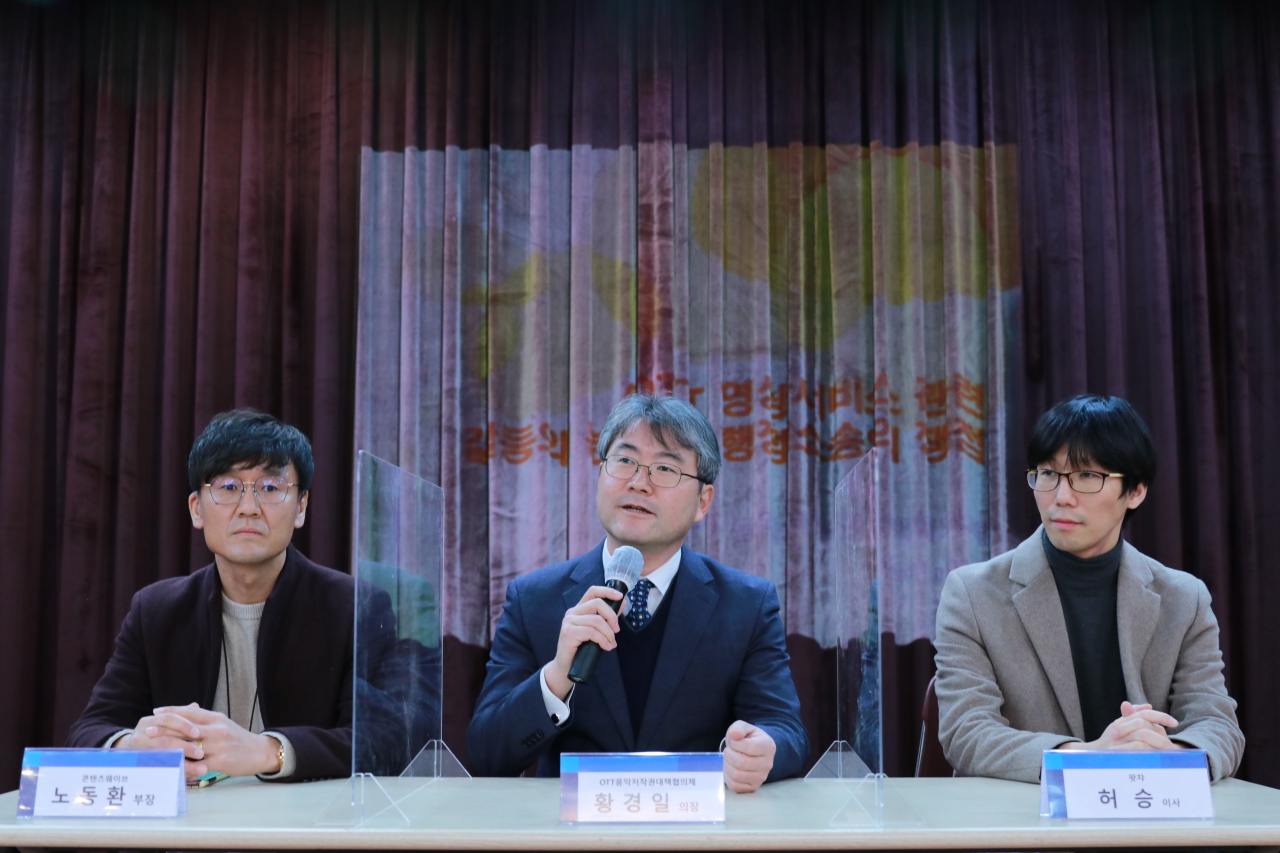 From left: MCC members Noh Dong-hwan, Hwang Kyoung-ill and Heo Seung speak during press conference at Yeouido, Seoul on Wednesday (Watcha)
Local over-the-top media services gathered at Yeouido, Seoul, Tuesday to express their anger at the Ministry of Culture, Sports and Tourism’s approval in December of an increase in the music copyright fee levied on local streaming services.

KOMCA proposed to the Culture Ministry in July an increase in the copyright fees paid by local streaming services, from the original 0.625 percent to 2.5 percent, which is what Netflix is charged.

The Culture Ministry eventually approved a plan that puts the copyright fee at 1.5 percent this year and which will increase it incrementally to bring it to 1.9995 percent by 2026. The copyright fee for IPTV and TV broadcasters are around 0.5 to 1.2 percent.

The ministry’s decision infuriated the local streaming industry, leading the committee to file an administrative lawsuit on Feb. 5.

MCC claimed that the Music Industry Development Committee that took part in the decision making process was biased in that seven of the 10 members represented copyright holders and only three represented users of the copyrighted material. Also, it claimed that it was difficult to engage KOMCA in discussion and reconciliation, ultimately leading to the lawsuit.

“We filed a lawsuit because parts of Ministry of Culture, Sports and Tourism’s approval process could be illegal. They did not gather the industry’s opinion and violated equality. We didn’t file the lawsuit to win. If the Ministry announces a new policy, the lawsuit can be cancelled at any time,” said Hwang Kyoung-ill, head of MCC. “We wanted to communicate with KOMCA, but was unable to do so despite arranging a meeting. The methods of communication are shutdown, resulting in ongoing conflicts.”

“As KOMCA holds more than 90 percent of the music copyright in Korea, restrictions need to be made from a public point of view,” said Heo Seung, director of Watcha public affairs team. “However, that wasn’t reflected in the revisions made this time around. We thought this would have a negative impact on the content industry’s development, leading to the lawsuit. The core of the lawsuit isn’t whether we win or not. It’s about protecting the rights of the copyright holders while making sure the users can access the content without a problem.

The committee also claimed that music in content like dramas, movies and animation is paid for at the content creation stage. The revisions could allow KOMCA to be paid for copyrighted material that has already been paid for.

In addition, the committee claimed that Netflix can pay the 2.5 percent copyright fee because it has a different structure from local streaming services. Netflix takes the copyright of its content from the creators, so it is paid back the copyright fee without the commission fee.

Although the raised copyright fee doesn’t imply an immediate increase in the subscription fee for viewers, the services claimed it could be a possibility in the future.

“When we did simulations after applying all the requirements of KOMCA, for Wavve, the copyright fee would increase around six- to sevenfold. While the Culture Ministry claims the fees are not high, it is monumental to us,” said Noh Dong-hwan, Wavve policy corporation department manager. “The monthly subscription fee isn’t something we can raise just because of higher copyright fees. We have to consider many aspects, but we are also a business that needs to make a profit. I think discussion on raising the subscription fee can happen in the future.”

Meanwhile, KT also announced Tuesday that it would file an administrative lawsuit. While Hwang said KT and MCC hold the same view on the new copyright fees, the two are not filing the lawsuit together.