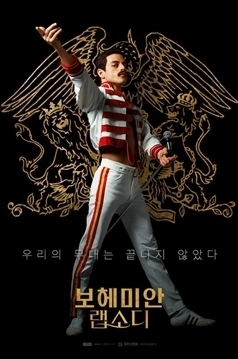 With gatherings restricted due to COVID-19, the broadcasters paid special attention to their movie selections to capture viewers stuck at home. SBS aired “Bohemian Rhapsody” at 8:40 p.m. on Saturday and it worked -- the movie drew 3.4 percent of viewers aged 20-49.

“The movie was a sensation in 2018. We thought people in their 40s and 50s could sing along to Queen and feel nostalgia. It is a movie the entire family can enjoy, and we intentionally bought the sing-along version,” an SBS official told The Korea Herald.

However, some viewers criticized SBS for deleting two crucial scenes in the movie in which two men kiss, and for blurring two men kissing in the background of another scene.

“The kissing scenes are very long. For the blurred out scene, it was while music was playing so we couldn’t take it out,” an SBS official said. “We didn’t have any special intention in editing. Even if it were a kissing scene between a man and a woman, if the scene is too risque or continues for a long period of time, making us feel that it could be uncomfortable for the families watching together, we would have edited similarly.”

The Korea Communications Standard Commission’s warning issued to JTBC for showing kissing between two high school girls in “Seonam Girls High School Investigators” (2014) in 2015 was another reason SBS preferred to edit out the scene. At the time, many viewers and broadcasters protested against the decision, but the warning was upheld.

“If we showed the movie at 10 p.m. or 11 p.m., we would have considered more options. We were especially cautious because 8:40 p.m. is when the entire family watches together,” said the SBS official. “We are also a terrestrial broadcaster and the movie was for ages 15 or above.”