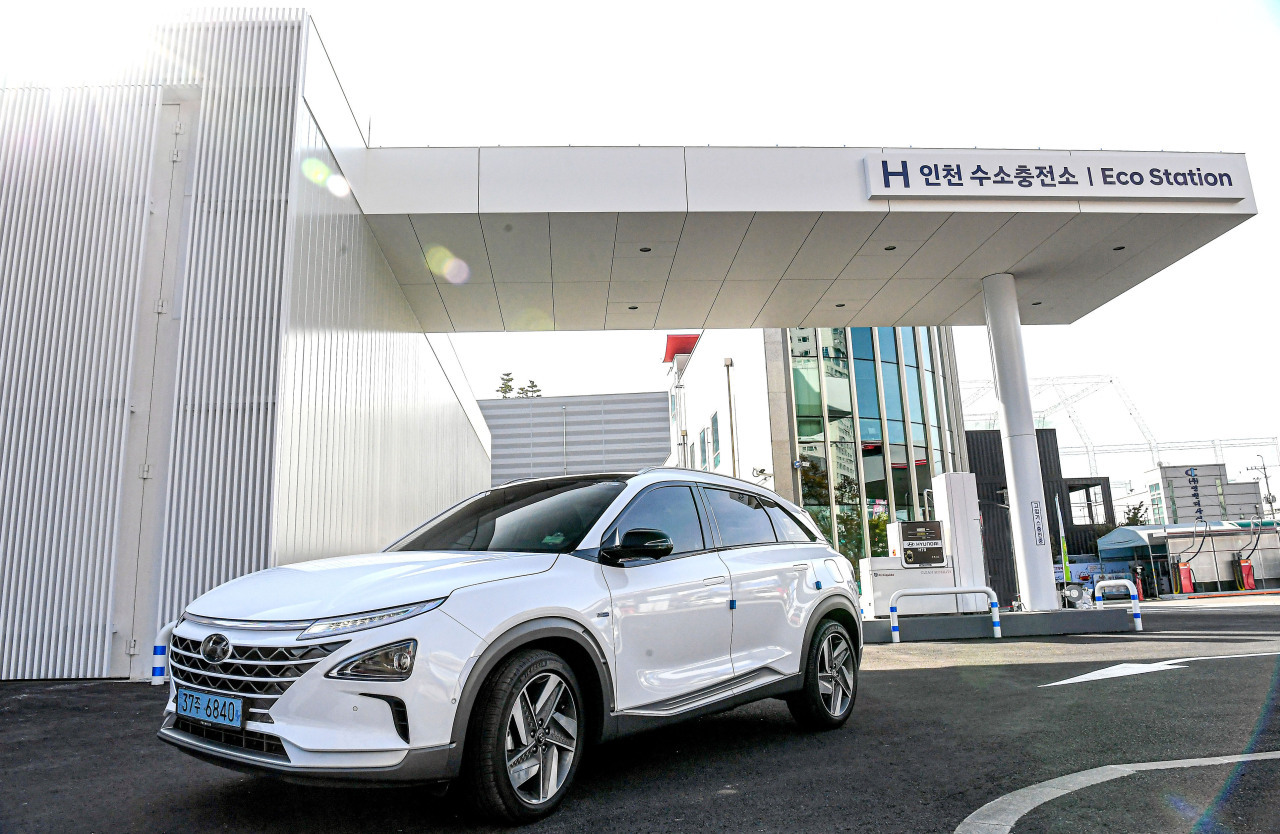 Hyundai Motor established Korea’s first charging station for hydrogen-powered commercial vehicles in 2019. (Yonhap)
To usher in the hydrogen economy, South Korea passed the world’s first hydrogen law. It centers on the development of an ecosystem for a hydrogen economy and expanded public access to the alternative fuel.

First, the hydrogen law is intended to bring transparency to the nation’s hydrogen pricing system. It allows drivers to check retail hydrogen prices on a real-time basis, just as they can now check oil prices, by visiting www.khydi.or.kr.

Most importantly, the hydrogen law tackles the safety issues that had long remained in a regulatory blind spot. Previously, hydrogen equipment -- electrolyzers, portable fuel cells and hydrogen extractors -- and fuel cell facilities that directly used hydrogen weren’t subject to periodic government safety checks. Now, safety assurance will be carried out in three steps -- technological safety at the design stage, an on-site examination upon completion of a facility, and annual safety checks.

The Energy Ministry expects the law to accelerate the realization of the country’s goals to produce 6.2 million hydrogen vehicles, establish 1,200 hydrogen charging stations, and roll out 80,000 hydrogen taxis, 40,000 hydrogen buses and 30,000 hydrogen trucks by 2040.

With the effectuation of the hydrogen law, the government will redouble its efforts to make the country a leader in the forthcoming hydrogen economy, said the Ministry of Trade, Industry and Energy.

“With the hydrogen law, Korea has laid a foundation to head toward hydrogen economy in full throttle. The ministry will give utmost attention and support to help the nation maintain its No.1 spot in the global fuel cell market,” said Industry Minister Sung Yoon-mo during his visit to the world‘s first by-product hydrogen fuel cell plant in Daesan petrochemical complex in South Chungcheong Province, Monday.

In terms of hydrogen cars and charging stations, the country is already a “first mover,” the ministry explained.

As of October, Hyundai Motor had sold more than 10,000 hydrogen-powered Nexo SUVs in Korea, according to ministry data. The nation’s leading carmaker accounted for 82 percent of global sales of hydrogen vehicles last year, selling 6,025 units. Toyota was a distant runner-up with 1,064 vehicles, followed by Honda with 218 vehicles.

Last year Korea installed 36 hydrogen charging stations, the highest figure in the world. Japan had the next-highest number with 24 stations, and Germany was in third place with seven stations, according to the Industry Ministry.