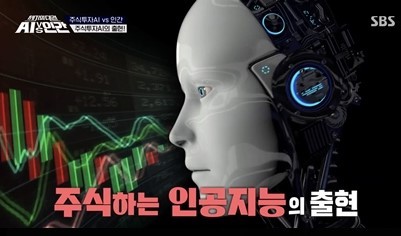 With only two competitions remaining in SBS’ reality show “Battle of the Century: AI vs Human,” the most recent episode on Saturday showed the stock investing AI battling it out with the CEO of Tastock Han Bong-ho, better known by his nickname Mach Seven.

Mach Seven, who runs a website sharing investing tips, is known for having flipped 1 million won ($893) into 7 billion won in just 10 years. He uses scalping, a trading strategy that generates profit from small price gaps in a short period of time, as his main investment method because he considers the Korean stock market to be more volatile than the US stock market.

The two competitors were given 100 million won and four weeks. The result was an overwhelming victory for Mach Seven who made over 40 percent in profit compared to the AI’s 0.1 percent loss.

The risk-averse AI used an algorithm to distribute and invested the 100 million won into 50 stocks. While the AI had the tendency to avoid short-term trades, it altered its strategy as time went on, analyzing its trades at midnight and deciding when to buy and sell the next day.

The AI was in the lead initially, but Mach Seven quickly surpassed it by making over 40 percent in profit in just four days.

“The tiger is scary when it runs, but riding the tiger is profitable. However, you can’t be too greedy. If you stay until the end, the tiger will eat you when it stops,” said Mach Seven. “It’s best to quickly run away in a downward market.”

While the programmers of the AI considered decreasing the distribution number from 50 as it started losing compared to Mach Seven, they ultimately decided to let things stand, considering any interference midway as undermining the program’s intentions.

“I enjoyed the meaningful competition,” said Mach Seven after his win. “I was amazed that the AI could manage risks despite the downward market.”

So far, humans are one up against the AI in the show after two wins, one loss and one tie in various fields.

In the first episode, musical diva Ock Ju-hyun won against an AI system that could replicate her voice while legendary female golfer Pak Se-ri lost against the AI program. The third match where the AI competed with detective Kwon Il-yong in picking out a criminal from a pool of suspects ended in a draw as both were able to correctly identify the criminal.

The final episode featuring the competitions between human experts and AI systems in trot music composing and drawing people just from hearing their voices will be aired on SBS channel at 11 p.m. on Feb. 14.