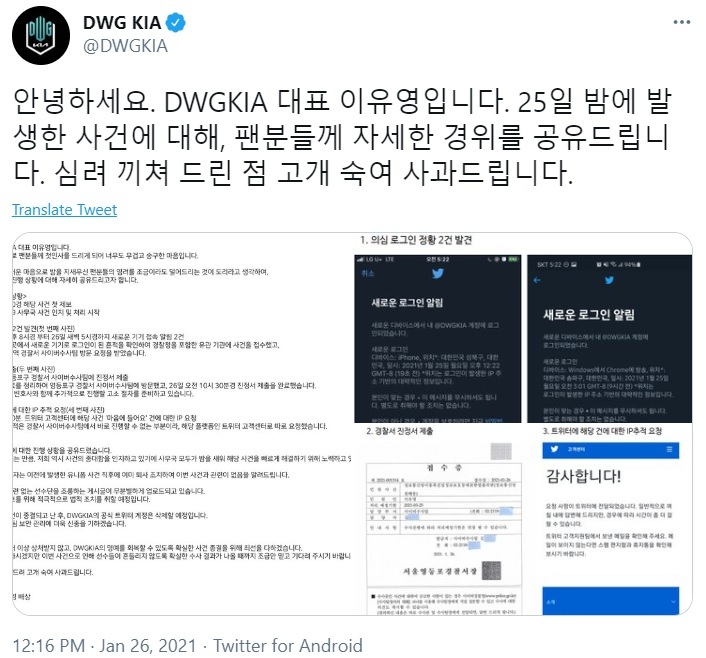 DWG KIA posted on Twitter on Jan. 26 that it had asked the police to investigate the hacking of its Twitter account. (Twitter)
From social media account troubles to player misconduct, teams in League of Legends Champions Korea are under fire for their glaring lack of professionalism. 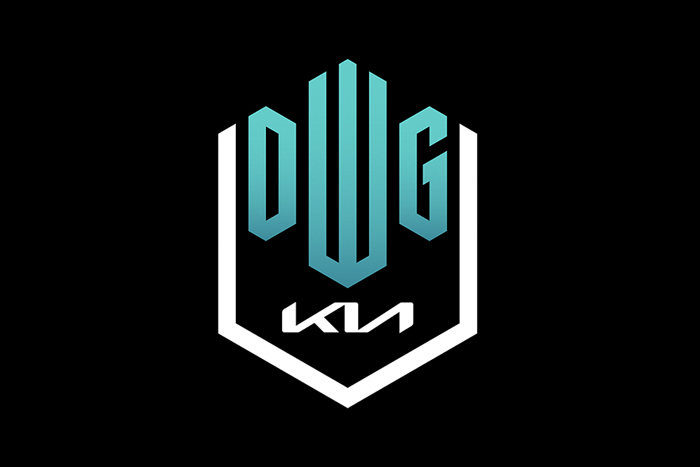 DWG KIA logo (DWG KIA)
Later in the day, DWG KIA CEO Lee Yoo-young announced through the team’s official Twitter account that suspicious account activity had been uncovered and police had been asked to investigate. The tweet also said the company had asked Twitter to trace the user’s IP address, a numeric designation that identifies a location on the internet.

“After the case is resolved, we will delete DWGKIA’s official Twitter account. We will pay closer attention to the security of the team, including its social media accounts.”

With an apology, DWG posted photo evidence of hacking as well as a police document indicating that the case would be investigated.

While teams use social media accounts to communicate with fans, especially in COVID-19 times, the practice is becoming a double-edged sword.

This wasn’t the first time that DWG had to apologize for activities on its social medial accounts.

In September a Twitch streamer uploaded a photo on Instagram of herself in a DWG uniform, with permission from DWG. But the DWG social media account manager told her the photo was lewd and asked her to take it down. After many fans protested that the company had not expressed any objections to a similar Instagram post by K-pop star Sunmi, the company apologized to the streamer and backed down.

“The previous SNS manager resigned after the uniform incident and has nothing to do with this incident,” said Lee regarding the January hacking.

Although T1 apologized immediately and said the person in charge had received a strong warning, fans were furious and said the incident had tarnished the team’s image.

Accidental likes are not the only social media problems the teams face. Fans of another LCK team, DRX, were displeased last year when former DRX player Jeong “Chovy” Ji-hoon posted a personal YouTube video saying he was uncomfortable with the company’s promotional activities, such as videos on its social media accounts with misleading captions suggesting romantic relationships between teammates. He later left the team to become a free agent. This led to criticism of the company’s social media use.

Unprofessional conduct by players during games and on broadcasts outside of official matches are also irking eports fans.

All games played by esports players, both official and unofficial, can be seen through multiple channels. As pros play online, inappropriate behaviors such as trolling -- the act of intentionally losing or disrupting games -- and swearing at others have caused problems for the teams.

Kim “OnFleek” Jang-gyeom of Liiv Sandbox, who made a racist comment toward a Chinese player during a broadcast in November, was suspended for three games and fined 1 million won ($896.50) by Riot Games. Sandbox later banned him from playing in the first round of LCK this season, imposed an additional 3 million won fine and required him to do 30 hours of community service. 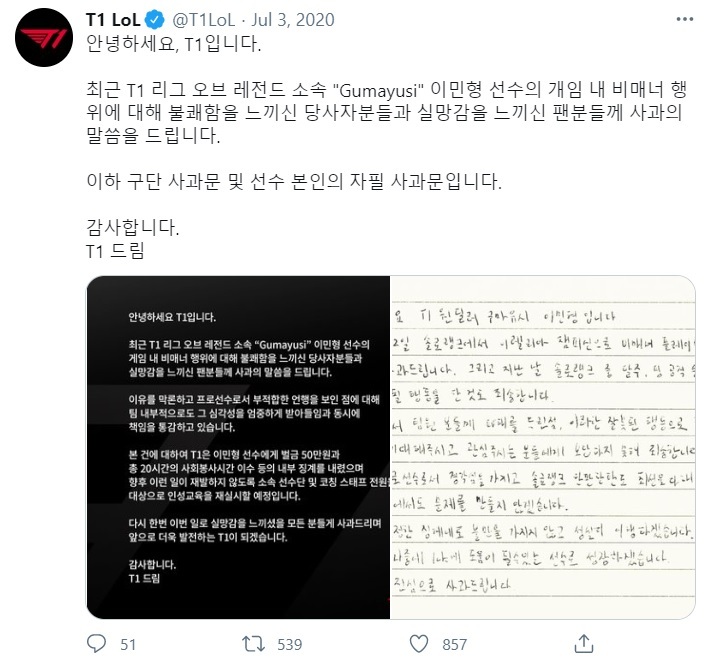 “I apologize for unprofessional acts such as leaving the game and spamming pings in the past,” said Lee. “I will not cause trouble with my everyday actions.”

But Lee got into trouble again on Sunday with one of the same team members he had apologized to in July, raising doubts about the sincerity of his apology. T1 remained silent on the conflict Sunday, while Lee appeared in an official match Wednesday with no mention of the incident.

The unsportsmanlike behavior by Gumayusi was a stark contrast to the level of professionalism T1’s iconic star Lee “Faker” Sang-hyeok has shown throughout his long career, further angering fans.

In addition, coach Han Earl of Afreeca Freecs and Seong “Flawless” Yeon-jun of Gen.G Esports received 800,000 won fines from Riot Games for inappropriate behavior in a game in December.

Meanwhile, Riot Games states in LCK regulations that “penalties such as restriction in tournament participation can be given by the Riot Games organizers to anyone, including players, coaches and owners, in the esports team who have been penalized in games for any reason.” Penalties such as chat restrictions or temporary bans on accounts can occur for offensive chatting or use of illegal programs, among other offenses.