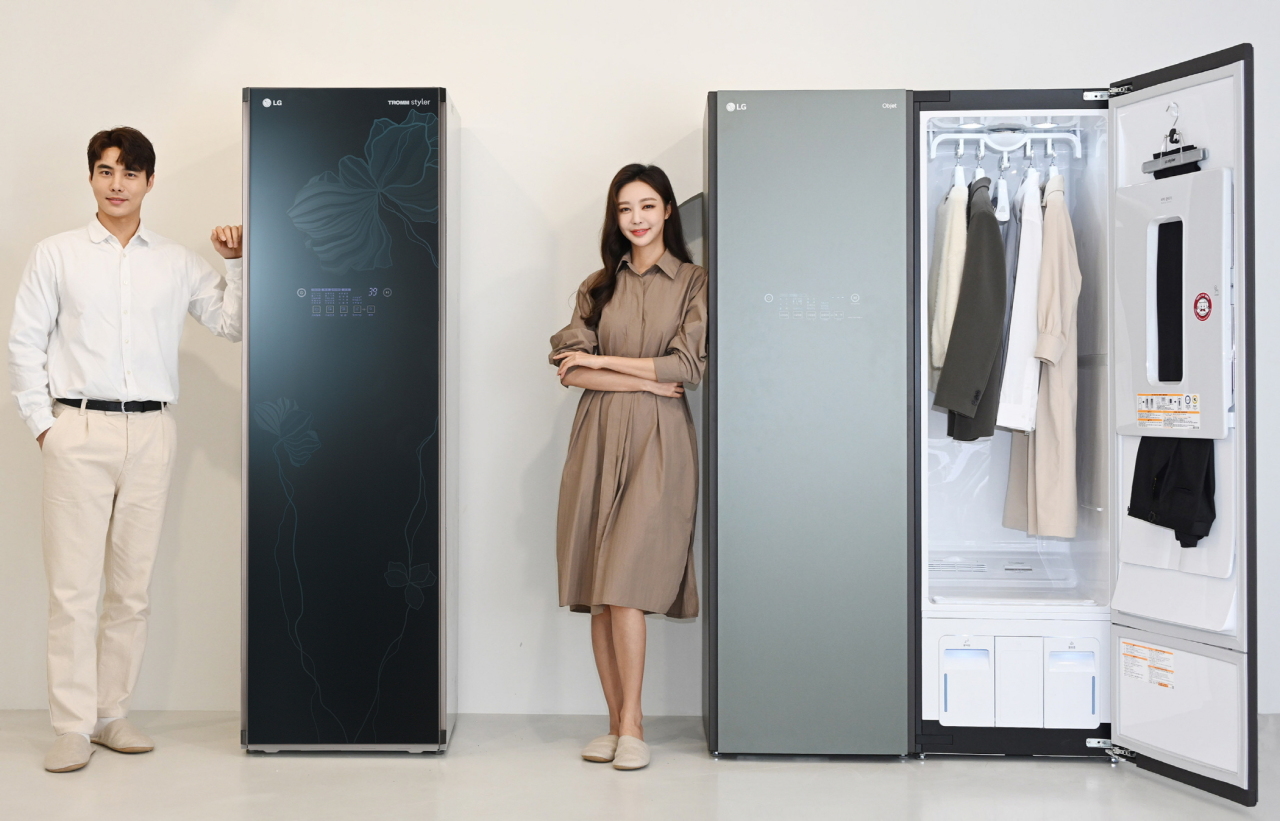 (LG Electronics)
“Do you have a Styler at home?”

Just like global brands such as Jeep, Post-it and Hotchkiss, the name “Styler” has blossomed into a proper noun for a clothing care system in modern society.

Invented by South Korea’s LG Electronics, the LG Tromm Styler has innovated a new category in the home appliance market over the past decade and become one of the essential home appliances, along with TVs, refrigerators and washing machines.

The development story of Styler dates back to 2002, when LG Electronics' former CEO Jo Seong-jin heeded his wife’s advice.

As Jo often spent time in overseas hotels for business trips, his wife gave him a tip for getting the wrinkles out of his suits and shirts without an iron -- hanging them in a bathroom full of steam.

Noticing that the wrinkles were removed during the process of water absorption and evaporation, Jo set to the plan to build a clothes dewrinkling home appliance.

As the initial step, LG launched a research and development team at its home appliance factory in Changwon, South Gyeongsang Province, in 2006 to actually build a commercial product.

For the first five years, the team worked on developing an unprecedented solution -- removing wrinkles, deodorizing, drying and storing clothing in a closet-looking electronic product.

As a result, the team filed as many as 220 related patents by the time the Styler was ready to hit the market in 2011.

One of the key patented technologies is the Moving Hanger, to move the built-in hanger 200 times per minute to shake dust and wrinkles off clothes.

The appliance also includes LG’s other technologies, such as the True Steam to boil water and the Pant Press technology that holds pants tight and sharpens pant creases.

But for years after its market launch, the Styler was deemed a luxury product -- not quite crucial to ordinary households’ daily lives.

It was only after the company’s own employees spread through word-of-mouth that the product started to really catch on.

Due to lower-than-expected sales, the company had run a promotional event offering a rare and substantial discount to employees. Though such expedient marketing triggered some complaints, it eventually led to praise from actual users and expanded into favorable responses from the rest of the market.

According to industry estimates, the domestic sales volume of clothing care appliances including Styler reached 50,000 units in 2016, and continued rising from there. The figure hit 300,000 in 2018 and doubled to 600,000 last year.

In 2020, Styler's sales were about 30 times higher than the figure the year of it’s launch.

In line with growing demand, LG adjusted the exterior of the Styler year after year in line with changes in lifestyles and trends.

In 2015, a smaller and slimmer Styler model, Tromm Styler Slim was launched reflecting consumer complaints that the initial model was too big to be placed in small dressing rooms of ordinary apartments in Korea .

Then, some consumers expressed a need for a bigger Styler to store more than four items. So, LG added its bigger edition Tromm Styler Plus that can store six items in 2017.

The Tromm Styler Mirror that offers a full body mirror on the front door was launched in 2018.

And last year, the Moving Hanger and Pants Press functions were upgraded in Black Edition 2, while the customizable Objet Styler offering different color and material choices was launched, too.

LG introduced the Styler to overseas markets like the United States, Russia, Britain, Italy, China and Japan in 2016. It is now sold in 20 different countries.

Amid the hieghtend sense of hygiene under the COVID-19 last year, overseas sales of Styler jumped by more than 50 percent, LG said. In Russia, sales more than doubled from 2019.

A good selling point was that the steam-based product is capable of disinfecting the face masks that have become necessary in the age of the novel coronavirus.

According to a recent test by a research team at Chonnam National University, the antivirus clothing care course of the Styler removes over 99.99 percent of viruses such as influenza A, adenovirus, herpes and porcine epidemic diarrhea virus, the company said.

Porcine epidemic diarrhea virus is another type of coronavirus -- different from SARS-CoV-2.

The disinfection function was effective not only on clothes, but also both KF94 and cotton masks, the company highlighted.