Yoon Ho-young, CEO of the lender, told reporters that loans for the low- and mid-credit borrowers will be “significantly” increased from last year’s 1.38 trillion won ($1.24 billion). The size and interest rates for such loans will be dependent on the market situation, risk management, and financial soundness, he said.

The move is seen as response to criticism that unlike initial goal to assist financial minorities, the bank has been focusing on high-credit borrowers.

“Last year, we had a relatively increased focus on high credit borrowers and didn’t meet the expectation loans for mid-rate customers. This year, we will expand our customer base for loans,” Yoon said.

As part of efforts to boost loans for low- and mid-credit score holders, Kakao Bank has lowered the credit loan limits for high credit users from 150 million won to 100 million won in January while raising interest rates for them by 0.34 percentage points from February.

It is also developing a unique credit scoring system for low- and moderate-credit score holders as well as those who lack credit information, Yoon noted.

The CSS developed by the banking arm of mobile giant Kakao could pose a threat to typical credit evaluation methods used by traditional banks, if the bank can make a revolutionary system that could improve profitability and lower default rates of low- and mid-credit loans.

”We are developing and enhancing our CSS based on financial and non-financial database held by the Kakao family,” Yoon added. 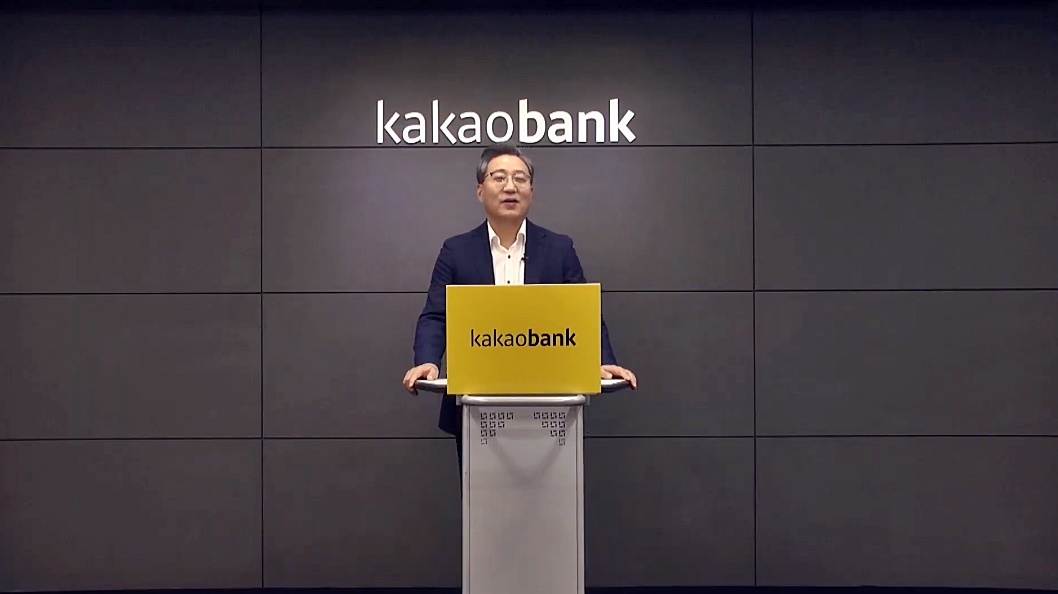 During an online press conference on Tuesday, Kakao Bank CEO Yoon Ho-young introduces the company‘s strategy for 2021. (Kakao Bank)
The lender which is banned from lending to big companies, will roll out their first loans for smaller business entries, initially targeting self-employed people.

In addition to expanding loan customers, it is also planning to bolster its platform business areas by utilizing the strong user numbers by adding sales channels for fund, bancassurance and credit card products.

It appears that the internet-only bank has been so far successful at translating its strong user base into profits.

The growth in net income was led by an increase in credit loans which contributed to a better net interest margin. The NIM stood at 408 billion won last year.

The three-digit growth in net income combined with the strategic maneuvers announced Tuesday, if successful, will pave the way for a much-anticipated public listing for the company this year.

The company’s IPO is one of the most keenly awaited ones this year along with other companies going public such as Kakao Pay, game studio Krafton and SK Bioscience.

Kakao Bank’s over the counter shares are traded at 72,000 won per share as of 2:30 pm on Tuesday. That puts Kakao Bank’s valuation at 29.3 trillion won, well above the valuation of leading commercial banks such as KB Bank’s 17 trillion won and Shinhan Bank’s 16 trillion won.

However, the company’s IPO won’t happen in the first half of the year, according to Yoon, because the company plans to gear up for a listing in earnest after its financial results for 2020 is approved at a shareholder’s meeting in March.