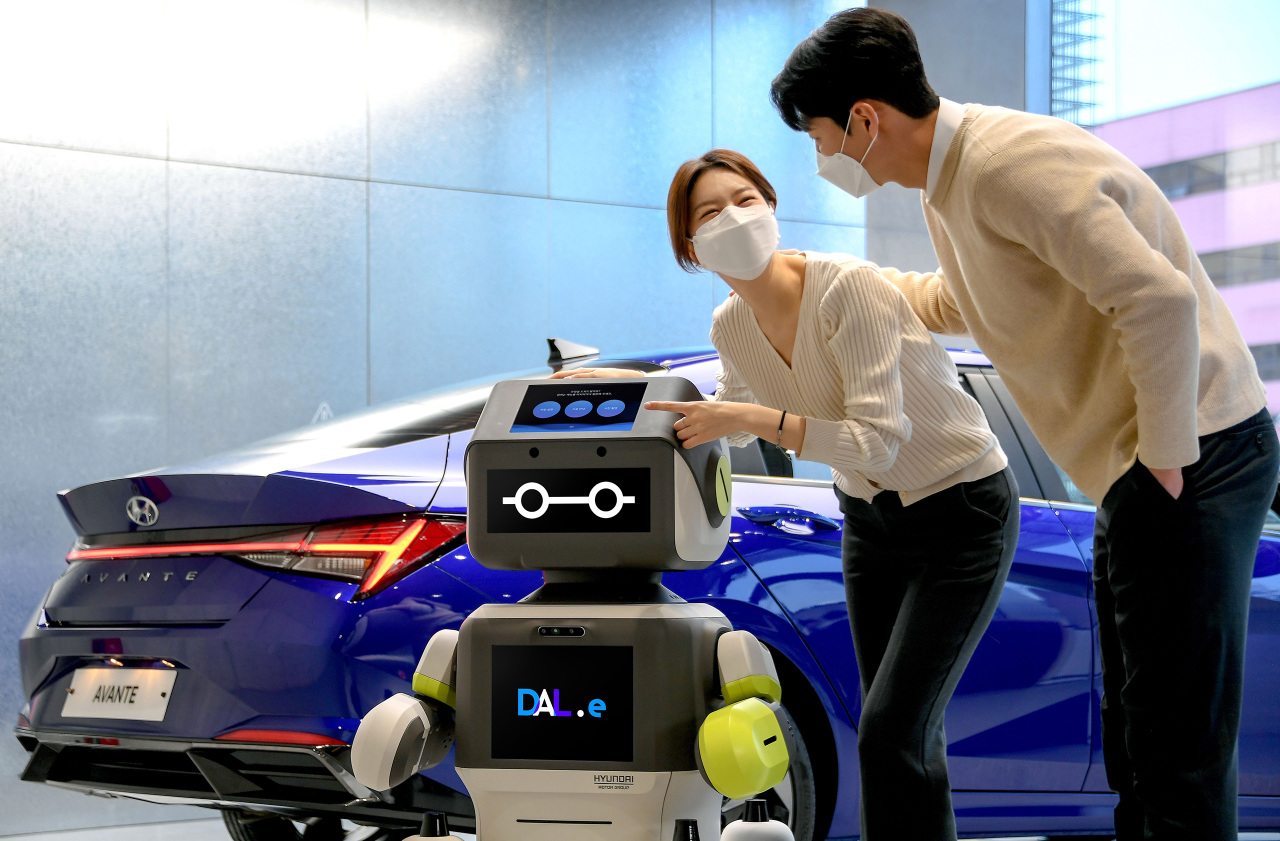 DAL-e, a customer service robot stationed at Hyundai Motor’s Songpa store (Hyundai Motor Group)
Of all the South Korean business groups that are facing the post-coronavirus market changes, Hyundai Motor Group is likely to be the one to undergo the most dramatic transformation this year and in the years to come.

Its mission is not just to maintain and safeguard conventional businesses, but to fundamentally transform itself as a new future mobility business. As a major carmaker, the group is also being impacted by growing calls for environmental sustainability.

Looking ahead to a fierce contest with global rivals this year, especially in the up-and-coming electric vehicle (EV) sector, Korea’s second-largest conglomerate is fully bracing for its next big step.

While focusing primarily on its forthcoming EV model launches, the group is also making extensive efforts to fund research and development in new growth areas, including robotics.

Also, reshaping itself under the leadership of Chairman Chung Euisun, the group has been making shifts in generations -- all part of gestures to grow out of a decades-long business legacy and step into new business paradigms.

Embracing the fast-paced technology evolution, the auto group will be enhancing cross- boundary partnerships with domestic and global IT giants.

Despite the market fallout of the COVID-19 pandemic throughout 2020, the Korean auto group put up a relatively good show in terms of sales and profits.

Flagship Hyundai Motor achieved 1.64 trillion won ($1.49 billion) in operating profit from October to December last year, up 40.9 percent from the 1.24 trillion won a year earlier. Sales for the given period stood at 29.24 trillion won, up 5.1 percent on-year.

The overall yearly figure slipped 22.9 percent from a year earlier, reflecting the early-stage market shock of the epidemic crisis but was partly offset during the latter half, especially the final three months.

The key factor, according to officials, was the successful launch and sales of landmark car models such Tucson, GV80, G80, and Avante which raised the company’s total domestic sales volume to 204,190 units last year, up 5 percent on-year.

Besides its business performance, the automaker also saw its stock price soar this month, following the news reports on its alleged partnership with IT giant Apple to create the so-called “Apple Car” by 2027.

Kia also saw its quarterly performance progress, with its net profit from October to December reaching 976.75 billion won, up from 346.36 billion won observed a year earlier.

The motor group, however, is looking out to a challenging year ahead, partly due to the slow recovery pace and also because of the uncertainties in the swiftly expanding electric vehicle market.

“We managed to make improvements in operating profits, thanks to the expansion of premium models and sport utility vehicles, but the global auto market is unlikely to bounce back to the pre-pandemic level within this year,” said an official of Hyundai Motor.

EV, both opportunity and challenge for auto group

But as gasoline hybrid models accounted for a majority of 52 percent of the total, critics pointed out that the auto group’s green portfolio fell short of expectations, especially in light of the government’s vow to achieve carbon neutrality by 2050. 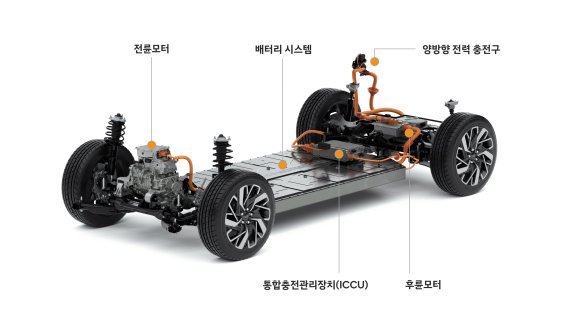 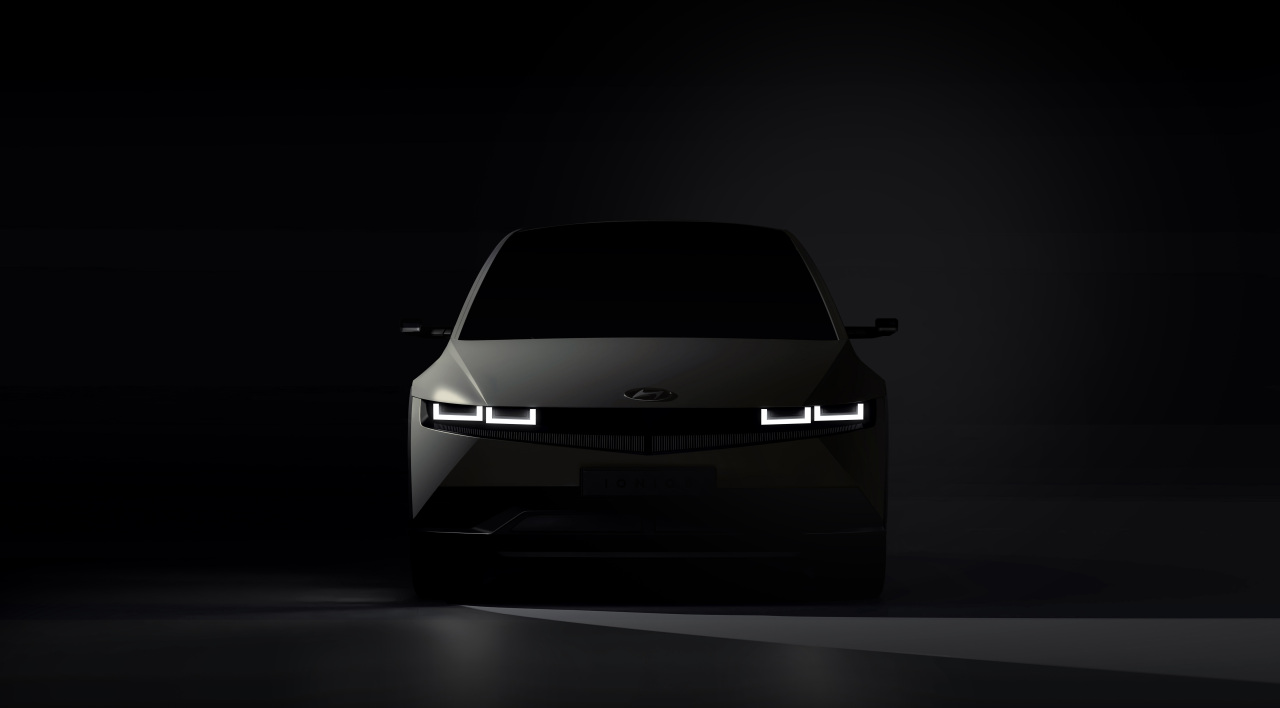 A teaser image of Ioniq 5, Hyundai Motor’s forthcoming purely electric vehicle model (Hyundai Motor Group)
Embracing the growing social pressure for sustainable, eco-friendly vehicles, the Korean carmaker is determined to make a paradigm shift this year and to establish itself as a comprehensive future mobility solutions provider in the intensifying market.

As a first move, Kia changed its corporate name from Kia Motors Corp. to Kia Corp., signaling its brand marketing direction to grow beyond the conventional car manufacturing business frame.

“We are breaking away from our traditional manufacturing-driven business model and expanding into new and emerging business areas, by creating innovative mobility products and services that meet customer needs,” said Kia President Song Ho-sung, upon unveiling the new corporate identity and slogan earlier this month.

In line with the transformation drive, Hyundai Motor Group is slated to roll out a series of new products this year, focusing on purely electric vehicles. In the lead is Hyundai Motor’s Ioniq 5 to be released as early as February, while Kia and independent prestige brand Genesis are also set to unveil their EV models later in the year -- tentatively referred to as their respective project names, CV and JW.

The Ioniq 5 mid-sized crossover vehicle is marked with the electric-global modular platform, or E-GMP, which offers a driving range of up to 500 kilometers on a single charge. The upcoming model will be accompanied by an ultrahigh-speed 800-volt charger that can charge 80 percent of full battery capacity within 18 minutes.

Also, the car will adopt the organic light emitting diode -- OLED -- panels manufactured by Samsung Display, in a rare partnership between the nation’s top two conglomerates.

In line with its extended plan to present 23 EVs by 2025, Hyundai is planning to roll out the Ioniq 6 sedan in 2022 and the Ioniq 7 sport utility vehicle in 2024. The company will also start an alphanumeric naming system -- like its global rivals such as BMW.

To embrace the increasing demands for EVs, Hyundai Motor set to expand the number of charging facilities across the country, starting with the EV-exclusive charging station in Seoul’s eastern Gangdong-gu earlier this month, in partnership with SK Networks.

The Korean automaker’s EV blueprint comes as global high-end car companies such as Mercedes-Benz, GM, and Volkswagen are scheduled to come up with their own EV models, all based on exclusive platforms. Tesla is also making an all-out effort to maintain the upper hand in the EV market, with its SUV Model Y to arrive in the Korean market within the first quarter. 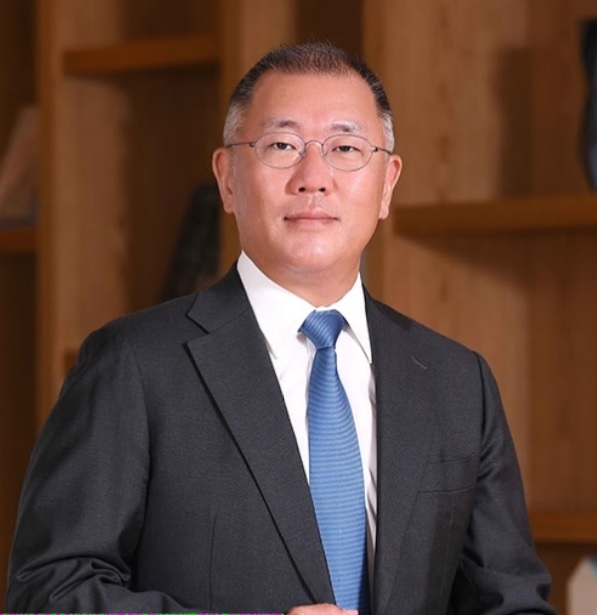 Chairman Chung Euisun (Hyundai Motor Group)
The key variable for the group was Chung Euisun’s promotion to the chairmanship in October last year, after years spent as vice chairman.

Following Chung’s inauguration for the top post, the group carried out an extensive leadership reshuffle in December, promoting Chang Jae-hoon to president and CEO of Hyundai Motor from his former position as executive vice president for domestic sales.

Chang will officially take office in March, once approved for the post at the regular shareholders’ meeting. He will join existing CEO Lee Won-hee, who will devote time to other specific areas such as value chain development and global business optimization, focusing on future mobility sectors.

Having joined the group through the logistics arm Hyundai Globis, Chang made a rare case of an “outsider” climbing to the automaker’s top post. His appointment also indicated the new chairman’s drive to renew the executive group and to grow beyond the business legacy of his father, Honorary Chairman Chung Mong-koo.

The group’s CEO reshuffle was also noted for the relatively high percentage of young figures in their 40s and experts in research and future business sectors -- such as urban air mobility, autonomous driving, hydrogen fuel cell and robotics.

Alongside the reshuffle, Chung came up with the group’s 2025 business strategy road map in December, vowing to invest some 60 trillion won in mobility, mobility-related service, and hydrogen fuel cells by 2025.

It was under such context that the group has come to reconsider its original plan to build a 105-story global business center in Seoul’s eastern Samsung-dong -- a site which already cost the group 10 trillion won. The group is currently considering changing the design plan to two 70-story buildings or three 50-story buildings, though details are yet to be confirmed.

Also, the group introduced an electronic voting system to all of its affiliates last year, winning itself the top honor at the 2020 Korea IR Awards.

The e-voting system not only guarantees the shareholders’ rights amid the growing contactless trend caused by the pandemic, but also promotes corporate values by increasing management transparency, officials said.