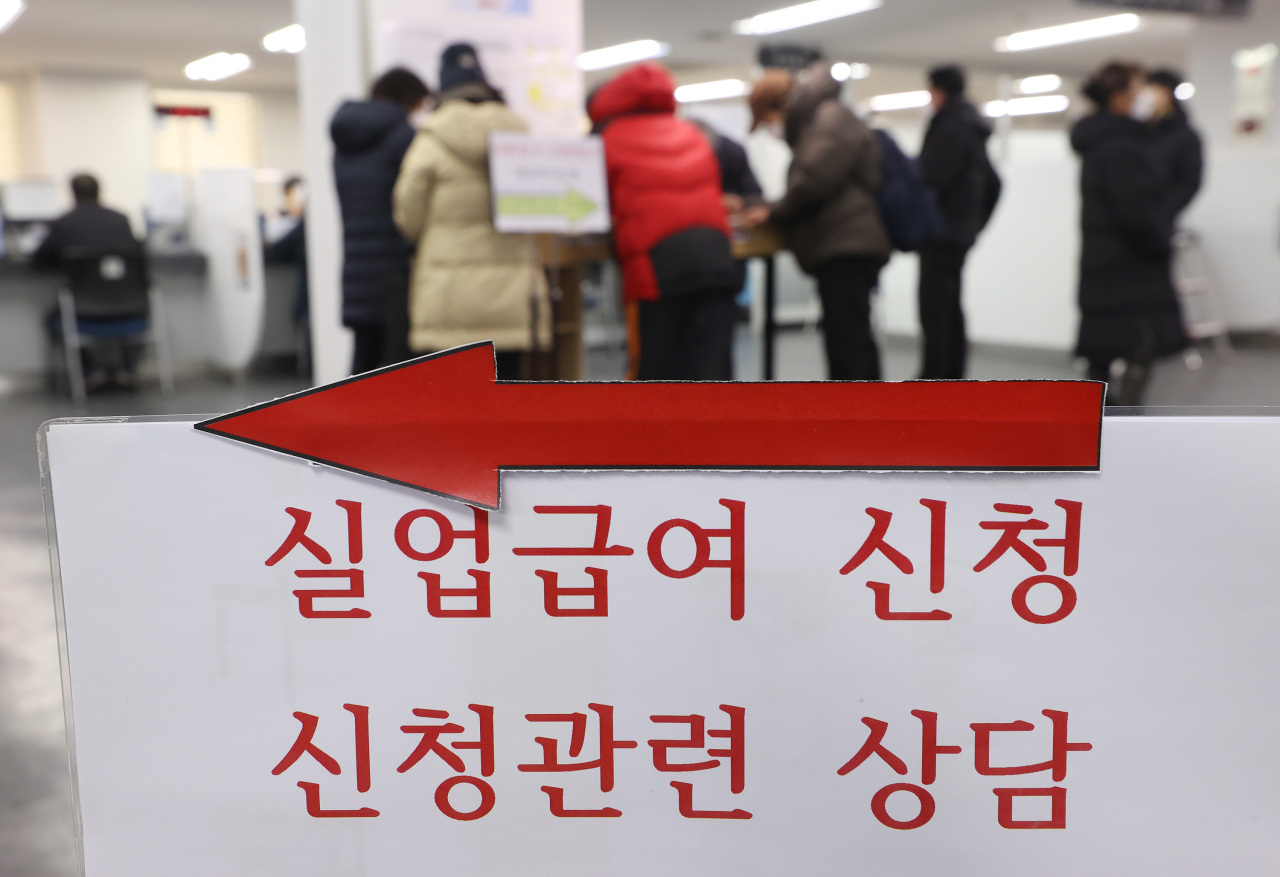 A group of people fill out applications for unemployment benefits at a regional office of the Employment and Welfare Plus Center in Seoul earlier this month. (Yonhap)
SEJONG -- South Korea has placed No. 5 in an indicator for relative income poverty among 33 countries, according to report by the Organization for Economic Cooperation and Development.

In the French-based organization’s analysis of 2019 figures or the latest available data, it put the poverty rate at 16.7 percent for Korea. The OECD defines the poverty rate as the ratio of the number of people whose income falls below half of the national’s median household income.

It made Korea the fifth-highest among the 33 economies analyzed. Four -- Colombia, Japan, New Zealand and Turkey -- were excluded from the comparison of the total 37 members.

Korea’s figure was higher than that of some emerging economies -- Chile with 16.5 percent, Estonia with 16.3 percent, Lithuania with 15.5 percent, Poland with 9.8 percent, Slovakia with 7.7 percent, Slovenia with 7.5 percent and the Czech Republic with 6.1 percent.

Iceland posted the lowest, with 4.9 percent, which could suggest that the gulf between the haves and have-nots was the smallest among OECD members.

Among other countries with the poverty rate under 10 percent were Denmark at 6.1 percent, Finland at 6.5 percent, Belgium at 8.2 percent, Sweden at 8.9 percent and Switzerland at 9.2 percent.

Among English-speaking countries, the UK, Canada and Australia were at similar levels with 11.7 percent, 11.8 percent and 12.4 percent, respectively, while the US recorded the second-highest of the 33 members with 17.8 percent.

The situation is far worse among senior citizens aged 66 or over, according to the OECD. In this age group, Korea topped the list with 43.4 percent, having maintained the uncontested position for several years running.

Denmark recorded the lowest poverty rate among seniors at 3 percent. Next-lowest were Iceland and the Netherlands with 3.1 percent, France with 4.1 percent and Norway with 4.3 percent.

According to the Korea Labor Institute, the high proportion of elderly living in poverty was largely due to the country’s low net pension replacement rate of about 46 percent, which also fell short of the OECD average of 65 percent over the past few years.

Some OECD members including Mexico and Japan had a net pension replacement rate lower than Korea. But they have not seen their senior poverty rates go nearly as high as Korea’s.

While the Moon Jae-in administration has created a huge number of public-sector jobs for seniors, the poverty rate among older people still came to 47.4 percent as of September 2019, according to Statistics Korea data.

Most of the new jobs for the elderly population were nonregular jobs, where they worked as contract or temporary employees.

Among the younger generation, those aged between zero and 17, Korea posted a poverty rate of 12.3 percent, lower than the corresponding figures for some developed economies in the OECD.

But many of the 33 countries posted youth poverty rates of under 10 percent. Among them were Austria with 9.6 percent, Sweden with 9 percent, Ireland with 8.6 percent, Norway with 8.1 percent, Poland with 7.4 percent and Iceland with 5.4 percent.