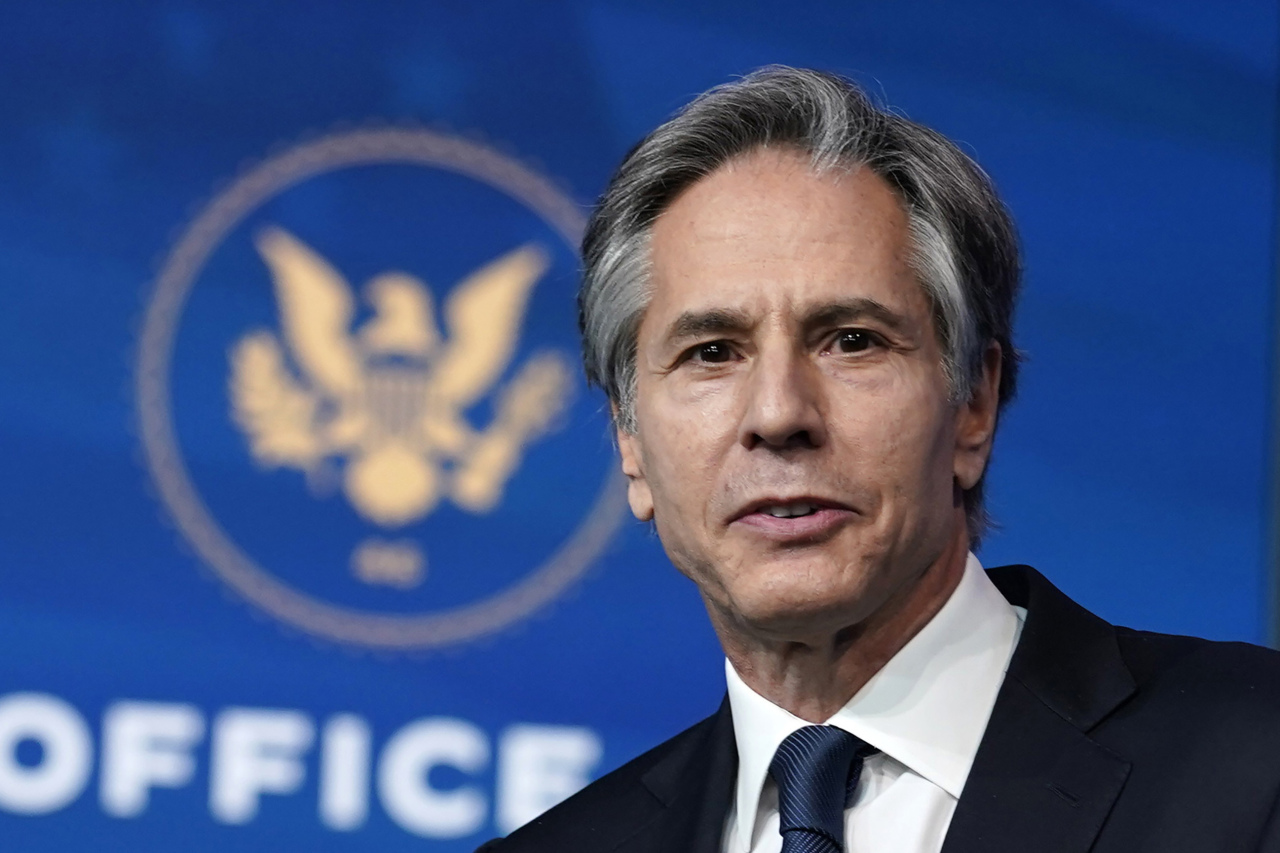 US Secretary of State Antony Blinken (AP-Yonhap)
Washington could seek the now-defunct four-party or six-party talks with Pyongyang to resolve the nuclear issue with Antony Blinken, a strong advocate of multilateral diplomacy, at the reins of the US State Department, experts said on Wednesday.

Blinken, a long time foreign policy aide to President Joe Biden, was sworn in as the new Secretary of State Tuesday (US time), after being approved by the Senate with a vote of 78-22.

With the top diplomat in place, Washington will kick off a review of the country’s policy on Pyongyang, which is expected to differ from that of former President Donald Trump’s top-down, summit diplomacy.

Blinken, during the Senate confirmation hearing last week, stressed that the policy review will start by “consulting closely” with Washington’s allies, including South Korea and Japan.

He and South Korean Foreign Minister Kang Kyung-wha held their first phone call on Wednesday, and the two agreed that the North Korean nuclear issue is an “urgent matter” and promised to consult closely to resolve the issue.

Noting that the North’s nuclear arsenals are now more advanced and sophisticated than the Obama and Trump era, Cheong stressed that both denuclearizing the North and bringing the regime back to the table would be very difficult without China.

“Washington is well aware of this. So it could opt for a multilateral approach -- such as the six-party or the four-party talks,” Cheong said.

Sydney Seiler, the US national intelligence officer for North Korea who served as US special envoy for six-party talks during the Obama administration, also echoed a similar stance, saying that multilateral talks could allow Washington to have “greater trust and coordination on North Korea going forward” at the recent discussion hosted by the Center for Strategic and International Studies.

He stressed that the multilateral framework has its merits in keeping Beijing as a stakeholder and coordinating closer with Seoul and Tokyo, while also leveraging Moscow.

Set up in 2003, the six-party talks were a series of multilateral negotiations that brought together the two Koreas, the US, China, Japan and Russia, with the aim to end Pyongyang’s nuclear program. The North withdrew from the talks in 2009, and though there have been attempts to revive the negotiations since, it has never happened.

Many believe the four-party talks that took place in the late 1990s -- involving the two Koreas, the US and China -- is more feasible and preferred by Beijing than getting all six to the table.

But such talks, or any other working-level dialogue, would not happen so soon, experts agreed. In the meantime, Washington will likely continue to mete out sanctions and take a hardline stance to gain leverage over Pyongyang.

“The US will likely continue to toughen sanctions, as ways to manage the North Korea situation,” said Park Won-gon, professor of international politics at Handong Global University. “Washington has many domestic and other foreign policy agendas it needs to take care of first.”

“The US will try to build leverage for negotiating with North Korea by enforcing sanctions and holding China accountable to UN resolutions,” said Leif-Eric Easley, associate professor of international studies at Ewha Womans University in Seoul, adding the Biden administration will look to maintaining deterrence against Pyongyang with combined defense exercises with Seoul.

The upcoming military drills between Seoul and Pyongyang, slated for March, are expected to be a key issue determining the outlook of the Peninsula, Park added.

“North Korea has warned against the military drill, but at this time, Seoul and Washington will likely go ahead,” Park said. “If the allies conduct exercises, there’s a high chance the North could retaliate, and that could change the whole scope of Washington’s approach to Pyongyang.”

As it could take up to six months for Washington’s North Korea policy review to be completed, Seoul needs to consult closely with Washington to have some input into the new administration policies, others say.

“South Korea can take the opportunity of Biden’s ‘alliances first’ approach to shore up Seoul’s relations with both Washington and Tokyo and have early input into the new administration’s policies,” said Easley. “It can seek sanctions exemptions for rebuilding the Mount Kumgang resort for humanitarian and environmental exchanges and suggest North Korea and climate change as areas for US-China cooperation.”

At the same time, Seoul needs to mend ties with Tokyo, which have been frayed on disputes surrounding history and trade, considering Biden’s emphasis on trilateral ties in Northeast Asia.

In the State Department’s readout, Blinken highlighted the importance of “continued trilateral US-ROK-Japan cooperation,” during his talks with Kang.