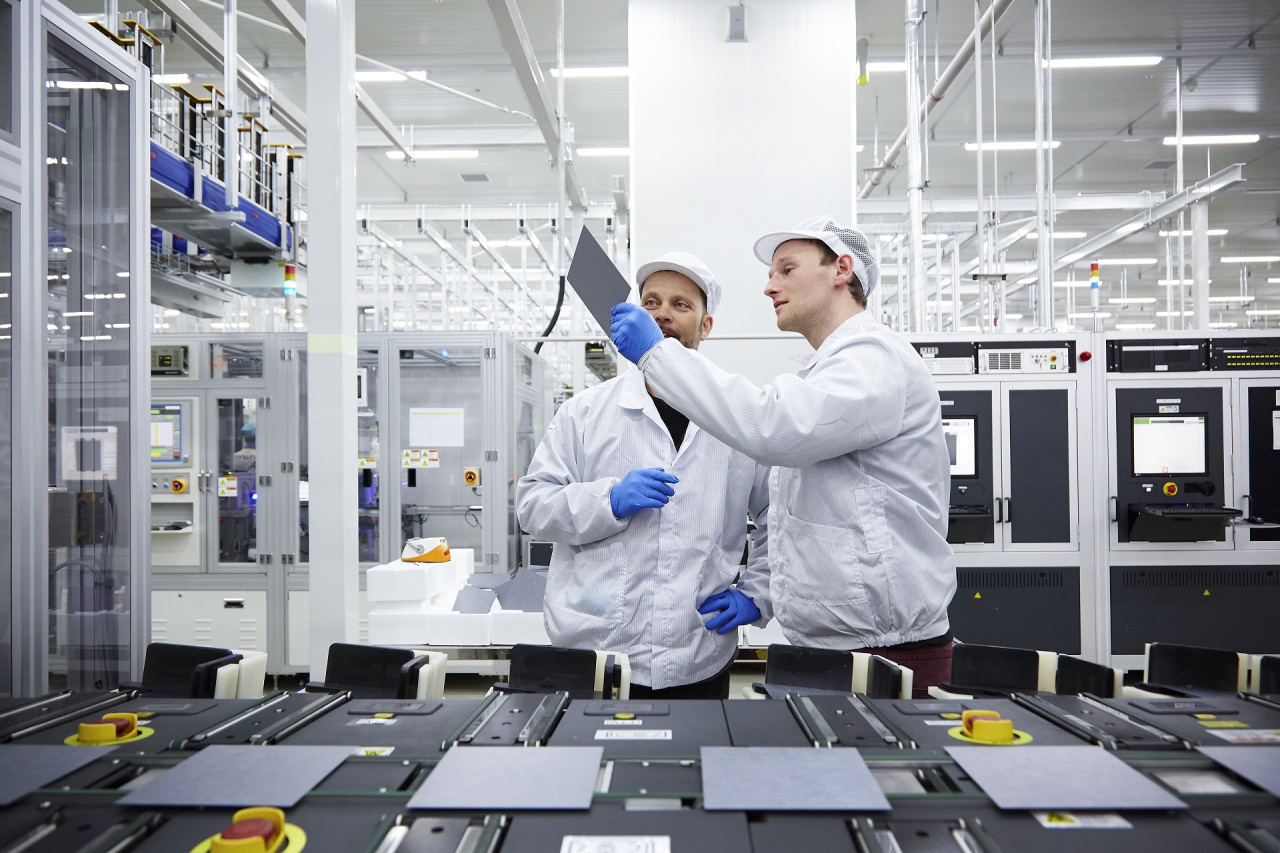 Hanwha Q Cells officials check the quality of solar cells. (Hanwha Q Cells)
Market turbulence brought on by the pandemic has left many companies in shambles. Some forward-looking corporations took the unease as an opportunity to reset and refocus, in order to emerge stronger in the post-pandemic era.

For Hanwha Solutions, this was a prime time to invest.

The new share issue is part of the company’s grand plan to inject 2.8 trillion won in its solar power and hydrogen businesses over the next five years to lead the next energy revolution for “green hydrogen.”


Despite its eco-friendly image, around 95 percent of all hydrogen in the world is generated by fossil fuels such as natural gas and coal, which defeats the very purpose of using hydrogen, according to the International Renewable Energy Agency.

To replace carbon-intensive hydrogen, the so-called “green hydrogen” has recently emerged as a viable option.

Green hydrogen is produced by a chemical process called electrolysis, which uses electric current to break water into hydrogen and oxygen. If this electricity is generated by renewable energy sources such as solar and wind, the hydrogen is labeled green hydrogen.

Hanwha Solutions plans to inject half of the 1.2 trillion won investment into creating a green hydrogen ecosystem, as the global hydrogen market, which stood at $786.9 million in 2019, is projected to reach $2.28 billion by 2027, according to Grand View Research.

And for a green hydrogen ecosystem, the three make a perfect team.

Q Cells, the No.6 solar panel manufacturer in the world by shipment as of 2019, can generate clean electricity using its own solar panels and energy storage systems. With that energy, General Chemical can produce hydrogen using its electrolysis technology. Then, Advanced Materials can contribute to the production of storage tanks for the hydrogen produced.

However, Hanwha Solutions’ ambitious plan has a key hurdle to clear: price competitiveness. 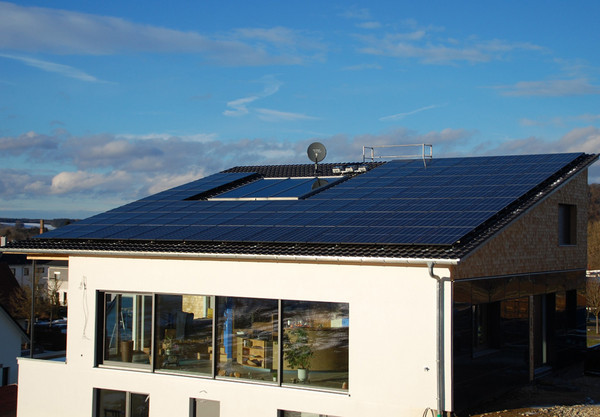 According to the International Energy Agency, green hydrogen production costs $3 to $7.5 per kilogram, while hydrogen generated by natural gas costs $0.9 to $3.2 per kilogram.

Industry experts say that Hanwha Solutions is prepared to address this issue by ramping up the efficiency of its solar panels.

This is exactly why Hanwha Solutions is pouring 400 billion won to develop next-generation solar cells including N-type cells, perovskite cells and tandem cells.

The N-type, perovskite and tandem solar cells, which exhibit much greater efficiency than conventional solar cells, are likely to play a key role in Hanwha Solutions’ green hydrogen ecosystem.

Depending on the type of chemical materials they are coated with, silicon-based solar cells are categorized into either N-type or P-type.

As of the first half of last year, there were seven solar modules with efficiency rates higher than 20 percent. The top five used N-type solar cells, according to Clean Energy Reviews.

Perovskites are easily synthesized compounds with an orthorhombic crystal structure. Perovskite solar cells exploit micrometer-thin films made of these materials to harvest light. 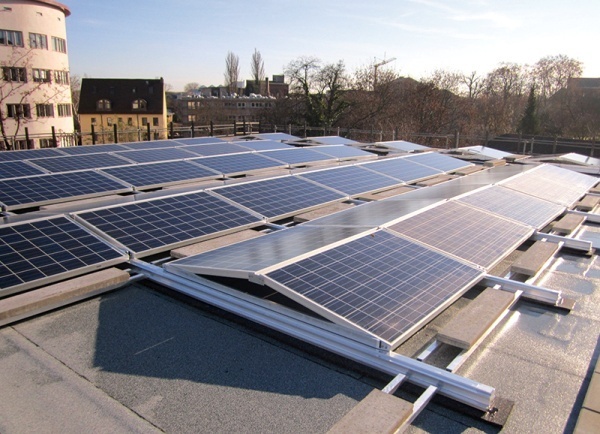 On top of developing next-generation solar cells, Hanwha Solutions aims to spend the other half of 1.2-trillion-won investment to diversify its business model to go beyond its current role as a supplier.

“It is positive that Hanwha Solutions is not just using the money to seek an expansion of size, but to improve its business model and pursue a structural change,” analyst Han said.

The first business model resembles that of construction companies. According to DB Financial Investment, Hanwha Solutions last year acquired solar power projects worth 2 gigawatts at 250 billion won. After completion, which will take between one and three years, the company will sell off those solar farms at 700 billion won to 800 billion won per gigawatt.

Hanwha is set to acquire a total 34 gigawatts of projects by 2025 and sell off 15.9 gigawatts of solar farms once they are completed. The revenue from the business is expected to record 700 billion won this year and climb to 4.4 trillion won by 2025.

Simultaneously, Hanwha Solutions is pursuing a dispersed energy resource business, or DER business, as the global DER market is projected to register an exponential growth up to 380 gigawatts by 2025 from the current 65 gigawatts, according to Hyundai Motor Securities.

Simply put, a DER business means operating small-scale power generation sources such as solar panels mounted on the rooftops of residential homes and selling the electricity to customers.

“In response to global campaigns such as Renewable Energy 100, there is a growing demand from European companies to source electricity independently. As the price of solar panels and batteries is getting lower and lower, Hanwha Solutions can consider installing solar panels integrated with energy storage systems for those companies for free and charge electricity bills,” analyst Kang said.


Making an investment is all about timing. In this sense, Hanwha Solutions couldn’t have chosen a better opportunity to make the 1.2-trillion-won investment.

As part of his Green New Deal initiative, US President Joe Biden aims to roll out 500 million solar panels across the nation by 2035.

Hanwha Solutions is the operator of the largest solar panel factory in the US that can churn out 1.7 gigawatts of solar panels a year, enough to power 600,000 households.

Above all, Biden’s ambitious plan is expected to further consolidate Hanwha Solutions’ dominant standing in the US market, as the country recently repealed tariff exemption on solar panels imported from China.

In the US, all imported solar panels have been subjected to tariffs since 2018. However, bifacial solar panels, designed to generate electricity from both sides, had been exempt from this tariff since 2019.

Using this loophole, bifacial solar panels imported from China infiltrated and eventually flooded the US market, accounting for 30 percent of total 5 gigawatts of solar panels installed in the country last year, according to Hyundai Motor Securities.

However, to keep Chinese products in check, the US repealed the tariff exemption on imported bifacial solar panels in November. This year, Chinese solar panels are subject to a penalty of 15 percent.

Hanwha Solutions is likely to become one of the greatest beneficiaries from the regulatory change. In the first half of last year, the company topped both US residential and commercial solar panel markets, commanding 22 percent and 21.5 percent of each of the markets respectively, according to Wood Mackenzie.