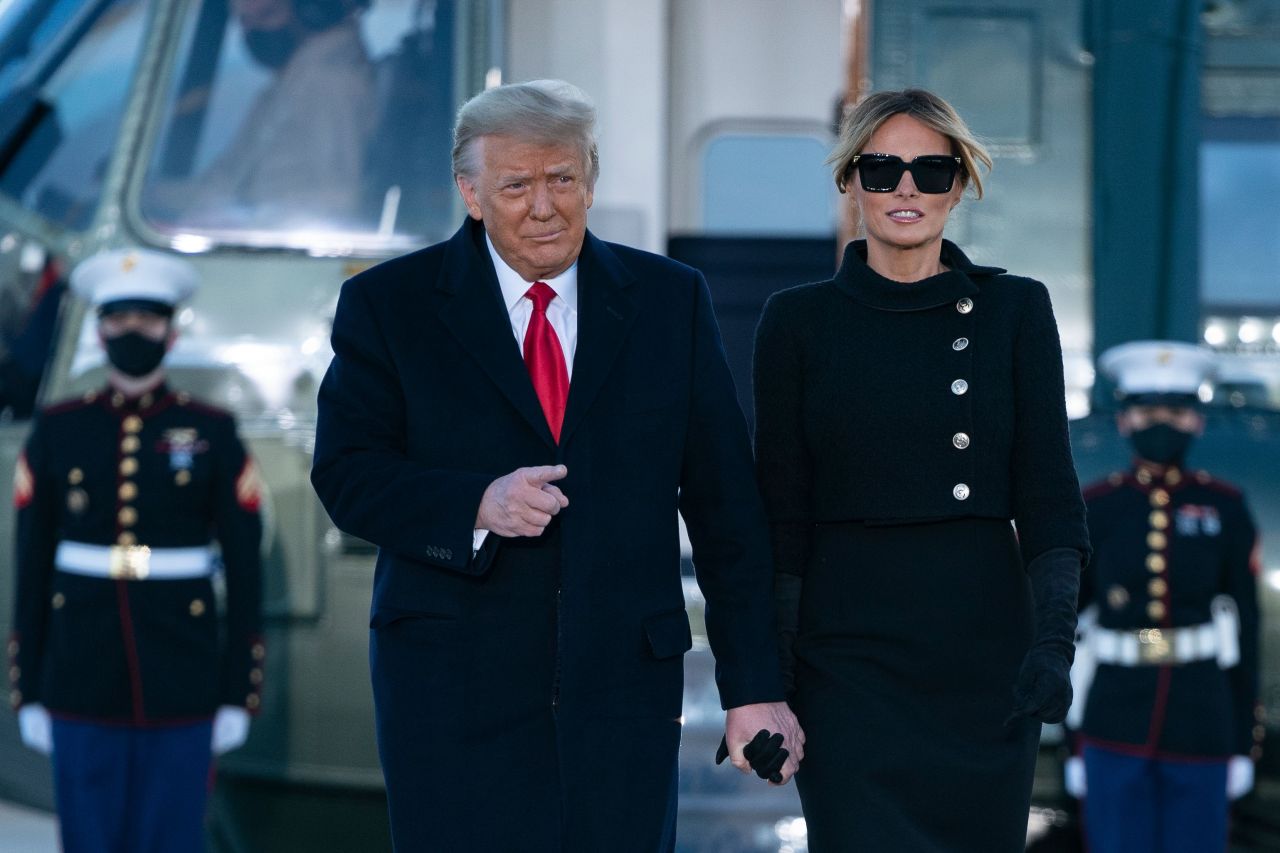 Outgoing US President Donald Trump and First Lady Melania Trump step out of Marine One at Joint Base Andrews in Maryland on Wednesday. (AFP-Yonhap)
WEST PALM BEACH (AP) -- His presidency over, Donald Trump bid farewell to Washington on Wednesday but also hinted at a comeback despite a legacy of chaos, tumult and bitter division in the country he led for four years.

"Goodbye. We love you. We will be back in some form," Trump told supporters at Joint Base Andrews in Maryland where he received a 21-gun salute as part of a military send-off before boarding Air Force One for his last time as president.

Trump was already in Florida, at his private Mar-a-Lago club in Palm Beach, by the time Joe Biden was sworn in just before noon as the 46th president of the United States.

Trump was the first president in modern history to boycott his successor's inauguration. He also refused to participate in many other symbolic passing-of-the-torch traditions surrounding the peaceful transition of power as he continued to stew about his election loss -- though he did leave behind a note for Biden. Biden declined to say what Trump had written, but described it as a "very generous letter."

Trump has maintained the election Biden won decisively was stolen from him, even though Republican officials in several critical states, members of his own administration and a wide swath of judges, including those appointed by Trump, have rejected those arguments.

After painting a dire picture of "American carnage" on his own Inauguration Day in 2017, Trump departed on Wednesday as the only president ever to be impeached twice, with millions more out of work than when he was sworn in and 400,000 dead from the coronavirus. Under his watch, Republicans lost the presidency and both chambers of Congress.

He will be forever remembered for inciting an insurrection at the Capitol two weeks before Biden's swearing-in that left five dead, including a Capitol Police officer, sent lawmakers scrambling for safety and horrified the nation.

Trump orchestrated an elaborate farewell that included a red carpet and color guard, as well as his usual campaign soundtrack. Members his family were visibly emotional during the program at the base.

Speaking without notes, Trump told several hundred supporters that it had been his "great honor and privilege" to serve as president.

He acknowledged that his was not a "regular administration." Without mentioning Biden by name, Trump wished the new administration great luck and success, which he said would be made easier because he had laid "a foundation."

Before arriving at the airport, Trump had told reporters on the South Lawn of the White House that being president had been the honor of his lifetime.

"It has been something very special," he said over the sound of the Marine One helicopter. "And I just want to say goodbye, but hopefully it's not a long-term goodbye. We'll see each other again."

Aides had urged Trump to spend his final days in office trying to salvage his legacy by highlighting his administration's achievements. But Trump largely refused, taking a single trip to the Texas border and releasing a video in which he pledged to his supporters that "the movement we started is only just beginning."

Just before midnight, Trump signed a flurry of pardons and commutations for more than 140 people, including his former chief strategist, rap performers and ex-members of Congress.

In his final act as president, after landing in Florida and just as Biden was making his grant entrance at the Capitol, Trump announced that he was pardoning Al Pirro, the ex-husband of Fox News Channel host Jeanine Pirro, one of his staunchest defenders. Al Pirro was convicted of conspiracy and tax evasion charges and sentenced to more than two years in prison in 2000.,

As usual, the televisions aboard Air Force One were tuned to Fox News, airing Biden's inauguration ceremony, as Trump and his family took their final flight aboard the presidential aircraft. To mark the occasion, crew members announced the plane would fly low over Mar-a-Lago, descending as the Florida coast line came into view.

Unlike in Washington, where his presence was largely scorned, Trump was welcomed to his new home by several hundred supporters who lined his Secret Service motorcade route. The homecoming had a party atmosphere, with many backers dressed in red, white and blue. They waved Trump and American flags, held signs that read, "THANK YOU" and "TRUMP WON!" and appeared visibly emotional as his SUV crawled past them.

"We love you," they chanted as he drove by. He mouthed "I love you" back and raised his fist.

The crowd was a sign of the ongoing challenge Trump poses to a Republican Party whose Washington leaders have all but shunned him since his supporters violently stormed the Capitol on Jan. 6 in a bid to overturn the results of a democratic election. But Trump retains his iron grip on the Republican base, with the support of millions of loyal voters and allies still helming the Republican National Committee and many state party organizations.

Trump will be joined in Florida by a small group of former aides as he charts a political future that looks very different now from just two weeks ago.

Before the Capitol riot, Trump had been expected to remain his party's de facto leader, wielding enormous political influence while mulling a 2024 presidential run. He now appears more powerless than ever -- denied the Twitter bullhorn he had intended to use as his weapon and even facing the prospect that, if he is convicted in his Senate trial, he could be barred from seeking a second term.

For now, Trump remains angry and embarrassed, consumed with rage and grievance. He spent the weeks after the election sinking deeper and deeper into a world of conspiracy, and has continued to lash out at Republicans for perceived disloyalty. He has threatened, both publicly and privately, to spend the coming years backing primary challenges against those he feel betrayed him.

Some expect him to eventually turn completely on the Republican Party, perhaps by flirting with a run as a third-party candidate as an act of revenge.

On Wednesday, Trump made clear he has no intention of disappearing.

"Have a good life," he said in his final words as president. "We will see you soon!"