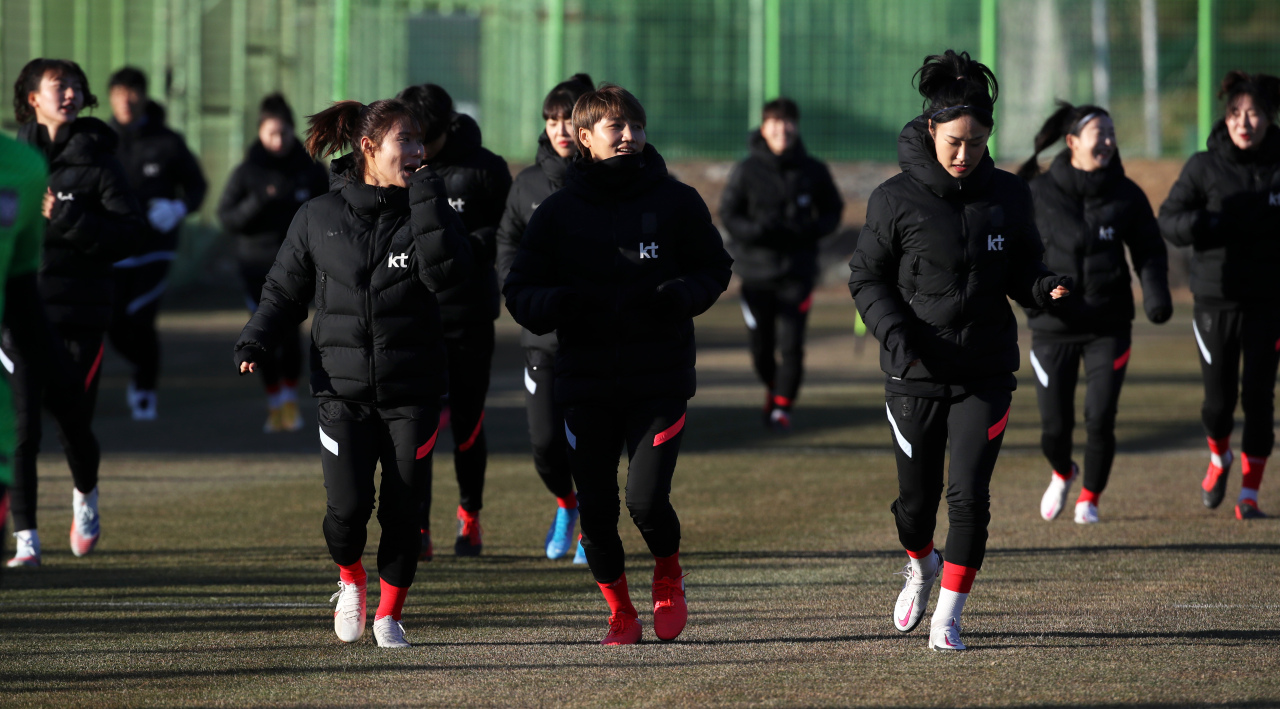 South Korea, dubbed the Taeguk Ladies, have lost 27 times against China in 37 previous meetings. Their most recent victory came more than five years ago. These two countries will meet on Feb. 19 and then again on Feb. 25, with the aggregate score determining who will compete at the Tokyo Olympics in July.

Bell, a self-proclaimed optimist from England, acknowledged on Tuesday that China will be the favorites but quickly added, "It doesn't really mean anything."

"It's two massive games with a lot at stake. We need to be physically and mentally on the top of the game," Bell told reporters at Gangjin Sports Complex in Gangjin, about 410 kilometers south of Seoul. Bell opened his final training camp before the qualifiers on Monday.

"It's a great chance for the players to make history," Bell said.

Women's football joined the Olympics in 1996 in Atlanta, and South Korea have yet to qualify.

Bell noted that South Korea's record against China so far is "disastrous" and it's about time South Korea changed the narrative.

"We are always proactive and we want to attack and defend well," he said. "We want to create an atmosphere that is uneasy for China."

Midfielder Lee Young-ju said she wants to build on some positive memories from the most recent match against China in December 2019, when South Korea held on for a scoreless draw at the East Asian Football Federation (EAFF) E-1 Football Championship and snapped a four-match losing skid against China.

"We played a solid match then, and we have a lot of players from that match here at the camp," said Lee, who started that 2019 game. "I think we feel confident as a team that we'll be fine as long as we're well prepared."

Forward Son Hwa-yeon, another member of that 2019 squad, said she was looking forward to facing China with an Olympic berth at stake.

"As an athlete, you're supposed to say you're confident even if you actually aren't," Son said with a smile. "These are must-win matches for us, and there's a sense of urgency within the team."

Even if Son and Co. beat China, the Olympic Games in Tokyo may not take place because of the raging coronavirus pandemic. The competition has already been postponed by a year from July 2020, and with the greater Tokyo area in the state of emergency, there are growing rumblings that the Olympics will be scrapped altogether.

Bell said, despite such uncertainty, motivation for his players "is not a problem."

"We don't know what's going to happen but we plan from day to day, and that's what we can do," he said. "I always like to think positive. We're looking forward (to the Olympics) and hope, obviously, that the Olympics takes place. I'd like to go to Tokyo, 100 percent."

South Korea will host the first leg of the playoff in the southern island of Jeju. The next leg is set to be played in Suzhou, China, though it could be moved to a neutral site because of COVID-19.

When asked about that possibility, Bell said, "We play everywhere, anywhere. Just tell us the time and the date, and we'll be there." (Yonhap)