(Screenshot captured from the presidential office’s website)
A parent of an autistic child filed a presidential petition Friday after having received numerous complaints by neighbors in their apartment building.

According to the presidential office’s petition website, a petition titled “Please save our family of autistic children” was posted under the category of “child-rearing/education.”

The petitioner noted that he lives with a 9-year-old son who has autism in an apartment in Seo-gu, Incheon. He said, “Some residents are spreading false rumors that we, as parents, are abetting our children, and they keep on insulting our children that they are making ghost-like howling sounds.”

The petitioner explained that this misfortune initially began when the family moved into a newly built apartment in 2018.

He said, ”Some residents started posting a message on a community board dedicated to residents, insisting that it would be best for us to move out, mentioning that my child has autism which causes neighbors of the apartment to suffer.”

The petitioner wrote that since then, there have been countless complaints from the lower floor related to his son causing noise. “In order to prevent damage done to neighbors, I got my son prescriptions by a specialist and put him to bed each day around 7 p.m.,” he added.

The petitioner also said that even when the child was put to bed, complaints still came in, and that he was reported to the police after confronting and talking to neighbors downstairs out of resentment.

“Neighbors have posted on community boards that my child is howling like a ghost in the morning, while the parents are neglecting him and sleeping in another room,” the petitioner added in his letter to the Blue House.

The petitioner wrote, ”The mother of the child is currently taking medicine due to severe depression after receiving complaints day and night. The whole family is now on the verge of collapsing.”

He also pointed out that the value of apartments does not drop because a family is living with autistic children, and requested the nation provide proper measures that can allow “families with disabilities and those that do not have disabilities to live together.”

In 2008, the United Nations declared April 2 of each year to be Autism Awareness Day, using the color blue for recognizing, celebrating, and coming up with plans to improve the quality of life for those with autism, to help them live as an integral part of society. However, Korea as a country seems to have a long way to go in facing the challenges and awareness level of autism patients. 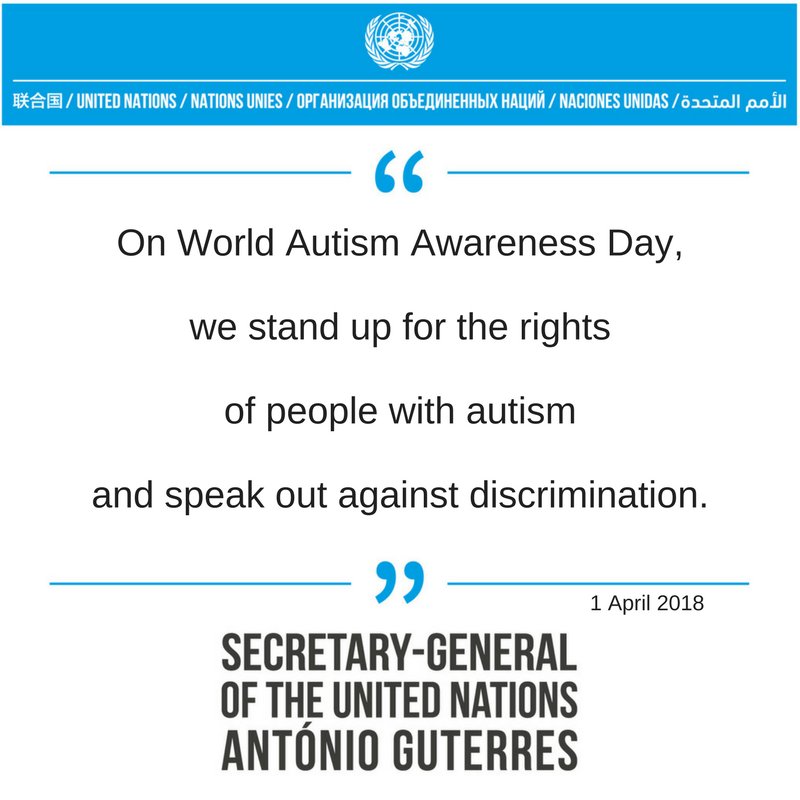 An image is posted to the UN's Facebook page in April 2018 to recognize World Autism Day. (UN's Facebook page)
Some 200,000 people in South Korea have been diagnosed with autism, and the number is growing, with research and studies backing up the idea that autism is related to environmental pollution and high-risk pregnancies -- such as having children at an advanced age.

A significant number of autistic children in South Korea are stuck in a welfare blind zone due to the nation‘s lack of interest in autistic patients. Although there are close to 200 special schools throughout the country, due to lingering false stereotypes and fewer resources as the students reach higher education, parents express frustration and hopelessness, saying that sending them to appropriate schools is harder than college entrance preparations.

With the added hit of COVID-19, the only option left for many autistic children who cannot go to school and have working parents is going to disabled welfare centers run by local governments during the day.

However, local governments suffering from financial conditions have failed to build proper welfare centers, which has also raised subsequent problems.