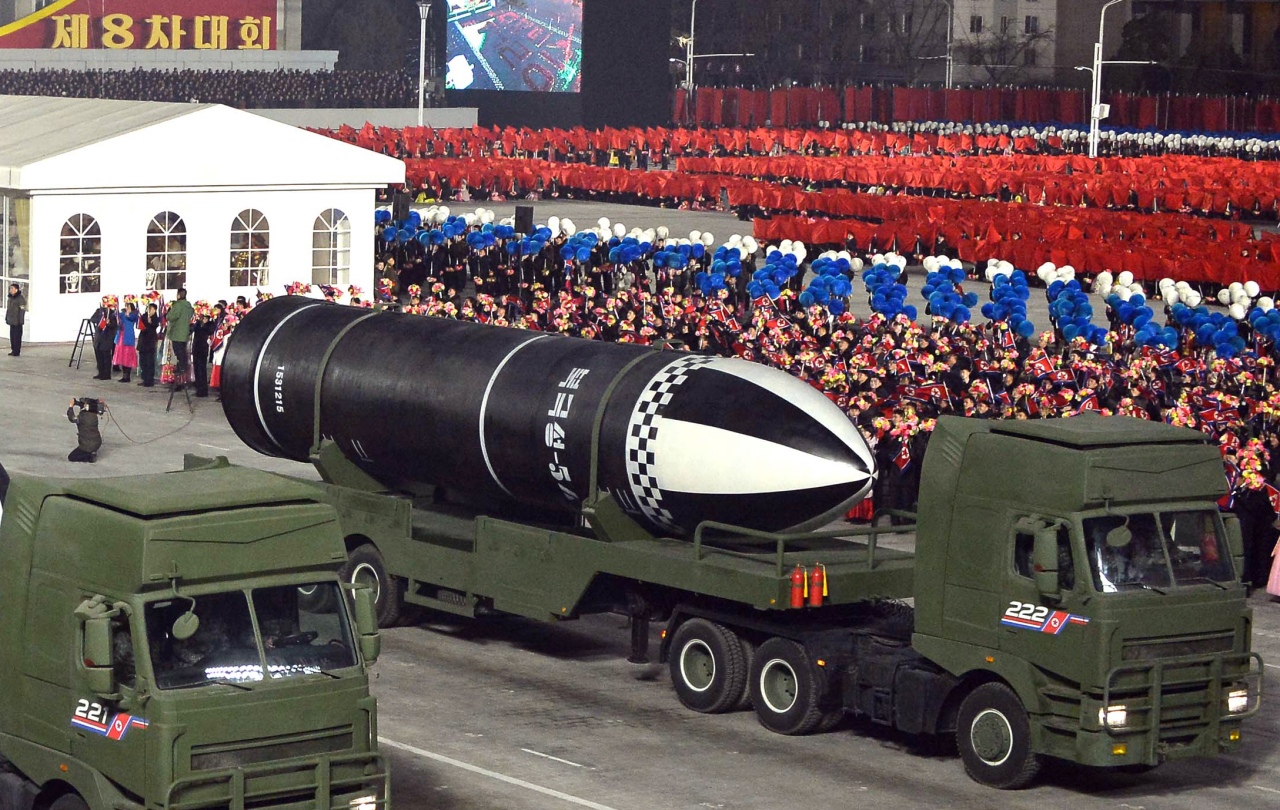 The Pukguksong-5-siot, a submarine-launched ballistic missile, is seen at the military parade in Pyongyang, North Korea, Jan. 14, 2021. The Korean letter “siot” means sea-based. (KCNA-Yonhap)
North Korea experts are divided over the seriousness of the threat posed by the missiles revealed Thursday at North Korea’s latest military parade attended by leader Kim Jong-un.

North Korea showcased what appeared to be new ballistic missiles -- a submarine-launched missile, the Pukguksong-5-siot and a short-range missile akin to Russia’s Iskander, the KN-23. The Korean letter “siot” refers to it being sea-based, and the previous fourth version was displayed at a parade in October.

Jeffrey Lewis of the Middlebury Institute of International Studies in the US told Voice of America that Pyongyang was not showing anything new.

“But the 5 looks like it has a longer payload section but looks like it’s basically the same. The same missile. So I think they’re messing around with the front end more than they are ... I mean I know people keep saying these things are getting bigger and bigger and bigger, but I don’t see that yet.”

Lewis added that there were still uncertainties surrounding the new weapons, given that the regime has yet to unveil a compatible submarine.

Joseph Bermudez, senior fellow for imagery analysis at the Center for Strategic and International Studies, had similar views for VOA.

“Okay, so we have to be very careful about what assessment we give to equipment we see or SLBMs that we see in this case. Because North Korea has always practiced camouflage, concealment and deception. They could probably ... there’s a good chance they’re trying to deceive us here.”

But, Shin Jong-woo, a senior analyst at the Korea Defense and Security Forum, disagreed.

“I wouldn’t entirely discredit the parade. Kim risks losing grip on power if his military and people find out everything was staged with totally empty weapons. Those weapons would have to be tested at some point.” The Pukguksong-5 could carry more warheads than the previous version, Shin added.

Ryu Seong-yeop, an intelligence analyst at the Korea Research Institute for Military Affairs, said the Pukguksong-5 is the rendition of what Kim said at the eight-day party congress: a more lethal nuclear missile. He noted the regime had continued work on a bigger payload, or multiple warheads.

Ryu went on to say that the KN-23, a short-range ballistic missile, appears to be an upgraded version of one showcased at the October parade. “The missile looks longer, which means a longer range.”

Shin said the latest KN-23 could be the tactical nuclear weapons Kim spoke of at the party congress, adding that it fits the description. The KN-23 is believed to put all of South Korea within range, while also posing challenges to interception by Seoul’s missile defense systems.

But Lewis was skeptical, telling VOA, “The front end of the fin is angled but the back end of the fin is straight. … That’s not a KN- 23. No, that’s something new. That is not an Iskander. Now that’s a different missile. That’s a brand new reveal that we have to work out what it is.”

South Korea’s military said it was still assessing North Korea’s latest missile technology, with one officer saying, “All the new weapons have not been tested. It would not be easy to see how far North Koreans have come.”