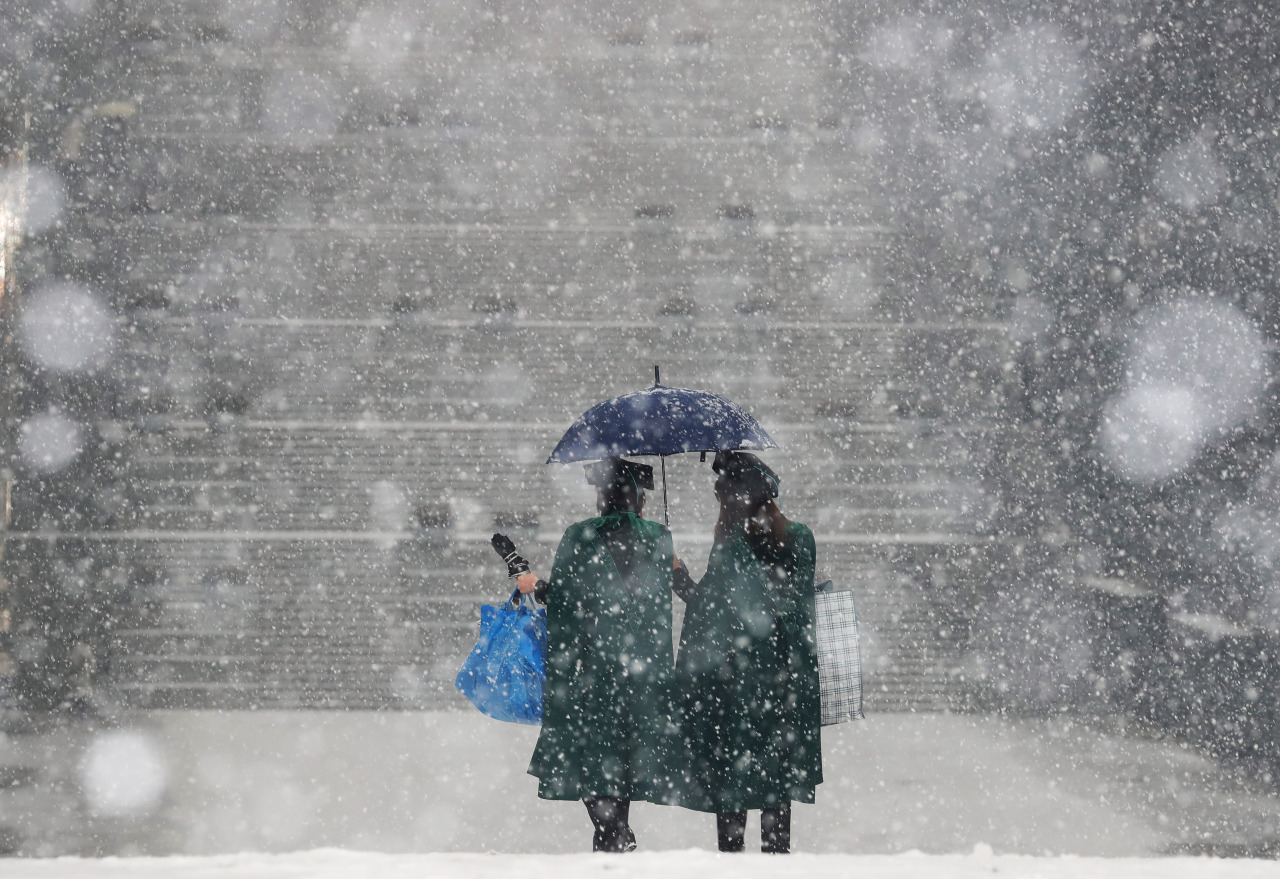 Heavy snow pours earlier this month at a college campus in Seoul. The photo is not directly related to the content of the story below. (Yonhap)
Private universities in South Korea may be heading for mass closures as the country crosses into its first-ever demographic winter, and experts say more government support is needed.

As the population shrinks, universities -- particularly less prestigious institutions, and those located away from population centers -- are facing a student shortage and increasing financial difficulties.

According to a Statistics Korea analysis, the number of Koreans aged between 18 and 21 is projected to fall from 2.36 million in 2020 to 1.19 million by 2040. Already, the number of high school graduates is nearly 16,000 fewer than the 495,200 students whom local colleges are trying to recruit for the upcoming academic year that starts in March.

Lacking the support that state-run universities receive, private institutions are likely to face increasing difficulties, as their revenues fall due to fewer students on campus, while costs to stay open remain high.

Experts believe the government should step in to financially back struggling institutions while creating a safety net to respond to economic setbacks and unemployment following closures of private universities.

“The population decline has become a challenge that needs to be immediately solved by the government and universities,” said KEDI researcher Seo Young-in, who authored the report.

Seo says the future is even grimmer for higher education, as the college-age population will fall drastically in the coming decades and hurt the bottom lines of already-struggling private institutions.

The pain, however, is not being felt equally -- low-ranked private colleges outside of Seoul bear the brunt.

A recent educational sector analysis showed that 71 of the 124 universities outside the capital region, most of them private and lower down in the nation’s rankings, will be unable to fill their admission quotas for the upcoming school year.

The number of those failing to meet the quota could increase by the end of February, the analysis said, as some students could opt out of college.

“As the number of college-aged students fell, there was also a drop in the number of Suneung takers this year, and competition for college admissions became less intense,” said Oh Jong-woon, a director of Haneul Education at Jongno Academic Institute.

“This impact on regular admissions is going to be worse for middle-ranked colleges and ones outside the Greater Seoul area.”

Even worse, many college hopefuls do not consider private colleges outside the capital region as their primary educational options, as they believe such institutions would not help them land stable jobs.

“I would rather not go to college at all if attending a private college in the middle of nowhere is my only option,” said Chang Min-ki, a 19-year-old who has taken the national college entrance exam twice since graduating from high school in 2019.

Chang did not do so well on the latest test in December, so he is planning to make his third attempt this year. He said his scores are not good enough to get into prestigious Seoul-based institutions, but that he has never considered leaving the capital.

“It’s like a death sentence to leave Seoul,” he added. “Once you leave Seoul, you can’t come back here for a job. That’s the formula.”

Regional colleges outside the Greater Seoul area will continue to suffer due to attitudes like Chang’s, experts say, which will only accelerate the scheduled death sentence for institutions.

“Recently, there has been a tendency of students who earn admission to prestigious public colleges outside the capital region to insist on entering mid- to low-ranked ones in Seoul,” said Lim Sung-ho, CEO of the Jongro academic institute.

“The distance between the capital region and the rest is growing, and it is difficult to overcome this hyper-concentration problem solely with efforts from regional colleges.”

With population decline already underway, it is inevitable that tuition income for other private colleges will shrink, which could result in job losses for thousands of university employees, education losses for students and economic losses for university neighborhoods.

As the threat continues, education experts are asking the government to play a greater role in controlling Korea’s college education and work toward creating a sustainable support system.

“Government support (for private college education) has been largely concentrated on a few private universities located in Seoul, and a rank system has started from that,” said Lim Eun-hee, a researcher at the Korea Higher Education Research Institute.

“We are in need of policies that impose greater responsibility on the government to ensure balanced growth of universities across the country.”

Korea is much more reliant on the private sector for higher education than other countries, with the government gradually cutting the number of universities it runs over the years, she said.

According to government data, the government was 37.6 percent financially responsible for the country’s higher education in 2019. The average for all members of the Organization for Economic Cooperation and Development was 66.1 percent.

Lim asks the government to gradually increase its role in managing the balance sheets of private colleges to free them from excessive reliance on tuition income.

The move would also help the government map out growth strategies for different regions, and might alleviate congestion in Seoul.

“By making the government responsible for private universities, we would be able to publicize private institutions while stopping those in the capital region from taking a greater share of the pie,” Lim added. “This solution would be meaningful in helping out regional universities at risk.”