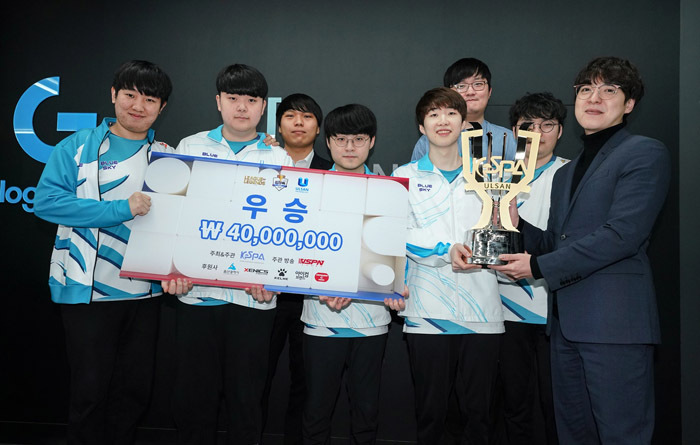 Damwon Kia poses on Jan. 2 after winning the KeSPA Cup (KeSPA)
All eyes are on the second match of League of Legends Champions Korea on Friday between Damwon Kia and T1 as the two powerhouse teams clash for the title of the strongest in the LCK.

T1, undoubtedly the greatest team in LoL history, will face Damwon Kia, the current world champion, in a best-of-three series.

The match will be Damwon’s first game of the season. The team showed that they are still one of the strongest teams in the world as they dominated the KeSPA Cup earlier this month, despite the departure of their star player Jang “Nuguri” Ha-kwon in the offseason.

Meanwhile, T1 put on a strong performance against Hanwha Life Esports on Wednesday with a roster full of young players. Lee “Clozer” Ju-hyeon played all three games, instead of legendary player Lee “Faker” Sang-hyeok, against Hanwha’s Jeong “Chovy” Ji-hoon, who is considered one of the best players in the league. Despite a devastating positional error in the second set, Clozer’s Irelia demolished Chovy’s Viktor in a solo kill in the third game, dominating the teamfights. Fans await how Clozer will match up against Damwon’s Heo “ShowMaker” Su or whether Faker will end up stepping in.

In Wednesday‘s match, T1’s 18-year-old Lee “Gumayusi” Min-hyeong, rookie to the LCK, played instead of Park “Teddy” Jin-seong and Moon “Cuzz” Woo-chan was swapped out for Choi “Ellim” El-lim against Hanwha in all three sets, making fans curious as to who would start against Damwon.

Another reason the showdown between Damwon and T1 has drummed up so much interest is because it will be the first match after the two teams’ rival coaches have swapped places. Damwon’s former world champion coaching staff -- Yang Dae-in and Lee Jae-min -- who are now at T1, will face off with T1’s former legendary coach Kim Jeong-gyun. Kim, who has taken up the reins at Damwon after a short stint with a Chinese team, won three world championships with Faker.

Whether Yang, who knows the Damwon squad playing style and habits better than anyone else, can manage to find a way to tackle the world champions is something the fans, other LCK teams and the teams around the world are keeping an eye on.

Former T1 player Kim “Khan” Dong-ha has also moved over to Damwon, filling in the shoes of Nuguri, making it a possible for a heated clash between former teammates should Faker or Teddy play.

“Although I pay attention to other lanes, the mid-jungle roles are a priority for me. As I have left Damwon, I needed many jungle candidates to win against Canyon,” Yang said, referring to Damwon’s jungler, during an LCK press conference. “Damwon are the gods of LoL. I contemplate everyday how I can kill the gods so I can come out on top in the end.”

The match between T1 and Damwon is scheduled for 8 p.m. Friday.