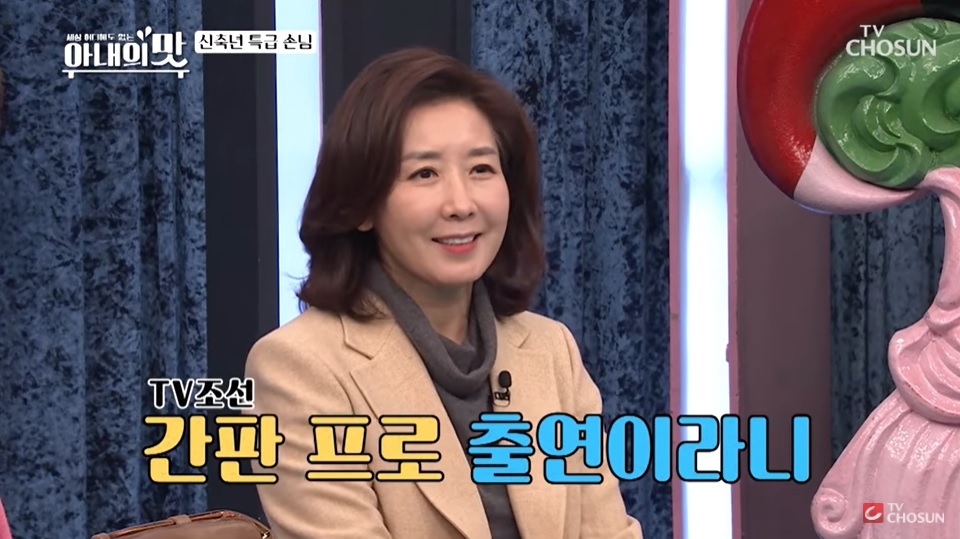 Na Kyung-won appears on TV Chosun’s entertainment show “Taste of Wife.” (TV Chosun YouTube)
As the April 7 by-election for Seoul mayor draws closer, likely candidates took to TV entertainment shows to show a more personal side of themselves, away from the battle lines of politics.

Na Kyung-won, the former floor leader of the conservative opposition, who announced her bid for Seoul Mayor on Wednesday, appeared on a Jan. 5 episode of TV Chosun’s entertainment show “Taste of Wife.”

The episode received the highest viewership rating in the show’s history at 11.4 percent, according to market researcher Nielsen Korea.

Another potential candidate Park Young-sun, who is currently the Minister of SMEs and Startups, also appeared on the show Tuesday, with a viewership rating of 9.6 percent.

Politicians appearing in entertainment shows is nothing new. Park Won-soon appeared in MBC’s entertainment talk show “Radio Star” in 2018 when he was serving as mayor.

However, in the past, they appeared in talk shows to talk about their ideals and back stories. President Moon Jae-in and his predecessor Park Geun-hye appeared on SBS’ talk show “Healing Camp” in January of 2012 while Ahn Cheol-soo of the People Party appeared in the same program in July, 2012. The three politicians were running for presidential election that took place in December that year.

Now, politicians are taking a new route, and showing what they are like at home with their families. One of the earliest examples was when Lee Jae-myung, the governor of Gyeonggi Province, appeared in multiple episodes of SBS’ “Same Bed, Different Dreams 2” with his wife in 2017 when he was the mayor of Seongnam.

In the Jan. 5 episode, Na showed herself at home, cooking for her husband and spending time with her daughter. Her family rarely made public appearances prior to the show, adding to the viewer interest. As Na spent time with her daughter who had Down syndrome and her family, she an image different from her political side, talking about her daughter’s crush and having a drink with her family.

“So many people showed interest. I wanted to tell me and my families’ story and think many took it to heart,” said Na on Facebook on Sunday. “The comforting words people gave toward Yu-na was such a big gift and support for our family as much as it was for Yu-na. It was a meeting and conversation with the people that had new meaning.” 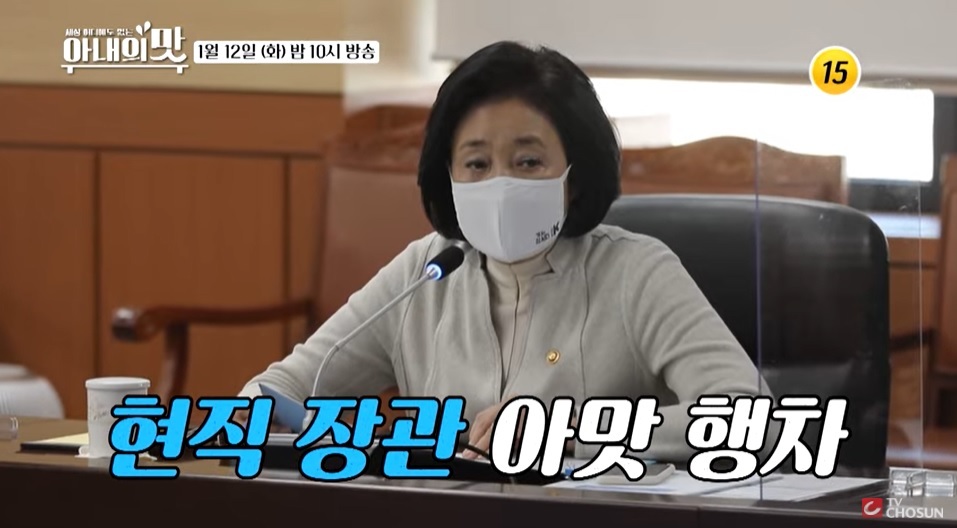 Minister of SMEs and Startups Park Young-sun appears on TV Chosun’s entertainment show “Taste of Wife.” (TV Chosun YouTube)
Park Young-sun’s episode showed everything from her hobbies to the story of how she met her husband. Park also talked about her time as a reporter and anchor for MBC, as well as her visits to the hair salon in the morning.

While the Election Broadcasting Code states candidates are not allowed to appear on broadcasts besides broadcasts that comply with regulations or are reporting and debate broadcasts 90 days prior to the election, the Election Broadcasting Deliberation Commission is formed 60 days prior to by-elections. As the committee can only judge broadcasts after it is formed, the appearances are technically within the boundaries of the law. If the said episode is rebroadcasted after the formation of the committee, it becomes a problem.

Some politicians have spoken out after the two appearances that such entertainment show appearances doesn’t give equal opportunity to other candidates and makes election more based on popularity rather than a political stance.

“I hope such cunning and cliched methods used to become Seoul mayor disappear,” said National Assembly member Kim Jin-ae on MBC radio on Wednesday. “I wouldn’t appear on the show even if I was asked to.”

Meanwhile, some political commentators said that election being about popularity, and politicians using media to gain popularity, was nothing new. They expressed hope that these appearances would increase public interest in politics.

“The broadcast channels are having politicians on the show for their personal business. Appearances of politicians are novel and raise viewership ratings. I don’t think it’s all that bad. It makes people with voting rights more interested in politics,” Park Won-ho, professor of Political Science and International Relations at Seoul National University told The Korea Herald.

“The politicians’ interest and consumerism going hand in hand, driving this phenomenon are worrisome, but it can be a good leeway into helping people understand certain politicians’ policies or providing platform instead of just ending as an entertainment show.”