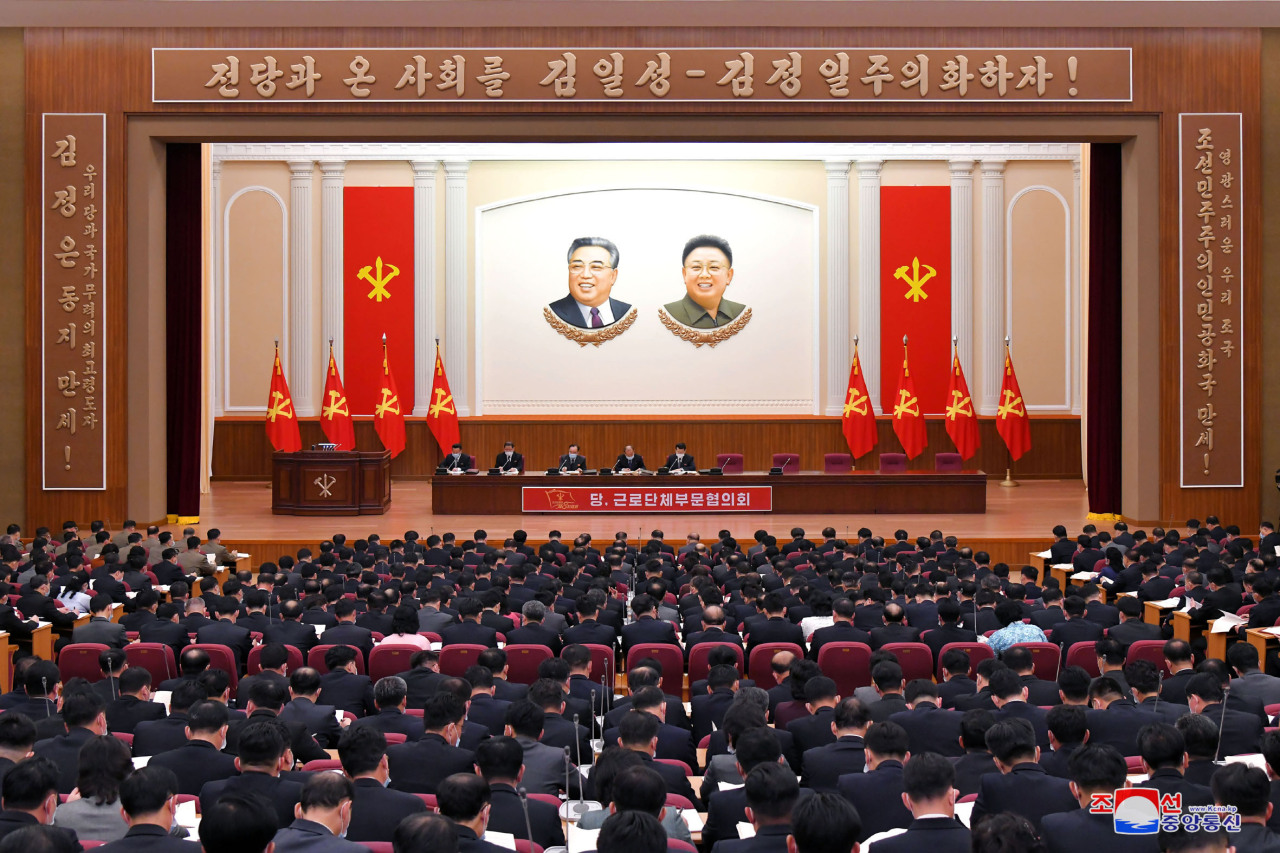 Delegates gather for the seventh day of the eighth congress of the ruling Workers' Party in Pyongyang on Monday. (KCNA-Yonhap)
North Korea’s rare party congress appears to be nearing its end, with officials reviewing a draft resolution on the policy goals laid out by the country’s leader, Kim Jong-un, and with key officials receiving invitations to “celebrations” of the congress, which could mean a military parade.

The delegates gathered for the ongoing eighth congress of the ruling Workers’ Party discussed a draft resolution for “thoroughly implementing the tasks set forth in the report on the work of the Party Central Committee,” during the seventh day of the session on Monday, according to the Korean Central News Agency on Tuesday.

The report refers to the policy goals stated by Kim during the earlier sessions of the congress, which kicked off last week and dealt with the economy, defense, agriculture, health and education. Kim vowed to boost the North’s nuclear capabilities to deter Washington, including building a nuclear-powered submarine and submarine-launched ballistic missiles, as well as making its nuclear missiles smaller and lighter. He also unveiled a new economic development plan for the next five years, one stressing “self-reliance” and “self-sufficiency.”

Monday’s meetings were held sector by sector, according to the KCNA, and addressed agriculture, manufacturing, education, public health, culture, the military and the munitions industry.

Seoul’s Unification Ministry, in charge of inter-Korean affairs, on Tuesday said Pyongyang’s congress appeared to be ending soon, with the only item left on the agenda being the adoption of the resolution.

The North’s previous congress was held over four days in 2017, and a resolution was adopted on the third day.

Pyongyang is expected to cap off the congress with a military parade, based on movements detected earlier suggesting a rehearsal.

On Tuesday, the KCNA reported that the government officials and others of distinguished service -- those who had worked in the party, the government and the military for a long time -- had been invited as special guests to a “celebration” of the party congress, without elaborating as to what kind of celebration it might be.

Seoul’s military said Monday that it had detected signs of a military parade Sunday night in central Pyongyang, but was checking to determine whether it was a parade or a rehearsal.

On Tuesday, the military said that activities related to the congress appear to be continuing, when asked to comment on signs of the military parade in Pyongyang. It added intelligence authorities from South Korea and the US are monitoring related moves in close coordination.