Presented by the Korea Musical Theater Association, the annual awards ceremony, the largest of its kind in Korea, was held at the Blue Square culture complex in Seoul.

“It is nearly impossible to make an original musical in Korea without the support of art institutions,” said Kang Byung-won, head of musical production agency Live which organized the “Marie Curie” show. The musical was supported by the Korea Creative Content Agency and Arts Council Korea. 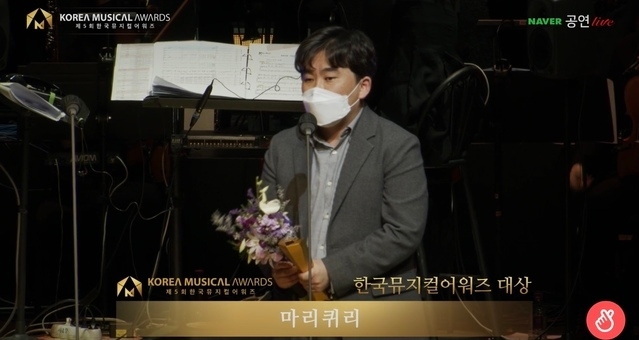 Kang Byung-won, head of musical production agency Live, speaks at the Korea Musical Awards ceremony held on Monday. (Korea Musical Theater Association)
“Last year, we were able to continue (our performances) thanks to the actors, staffers and audience members who wore masks,” Kang added. “I hope the authorities can reconsider the social distancing rules applied to theaters.”

The musical tells the story of physicist and chemist Marie Curie, the only woman to have received the Nobel Prize twice. She is recognized for her pioneering research into radioactivity.

The musical first opened in 2018 as a pilot. It first ran from February to March at the Chungmu Arts Center, a 300-seat theater. A few months later, the musical returned to the stage at the 700-seat Hongik Daehangno Artcenter, where it ran from July to September.

The best actress award went to Kim Su-ha, who played Mimi, a seamstress who suffers from tuberculosis in “Rent.” Kang Pil-seok, won best actor for his portrayal Nick Bottom, a desperate writer who tries to compete against Shakespeare in “Something Rotten.”

This year, the awards ceremony was held without any live audience to prevent the spread of COVID-19. Nominations were made for musicals which ran from Dec. 1, 2019 to Nov. 30, 2020 for more than seven days or had more than 14 paid performances. 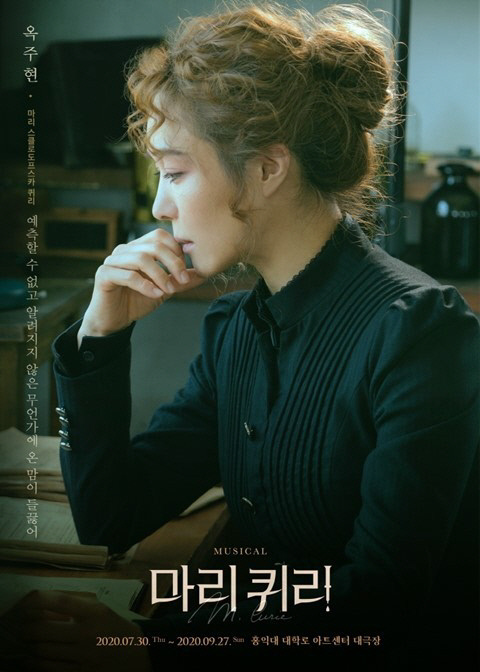 Poster image for musical “Marie Curie” (Live)
Fifty expert voters who work in or are connected to the local musical industry, and 50 Mania Voters, who are fans of musicals cast votes for the awards.