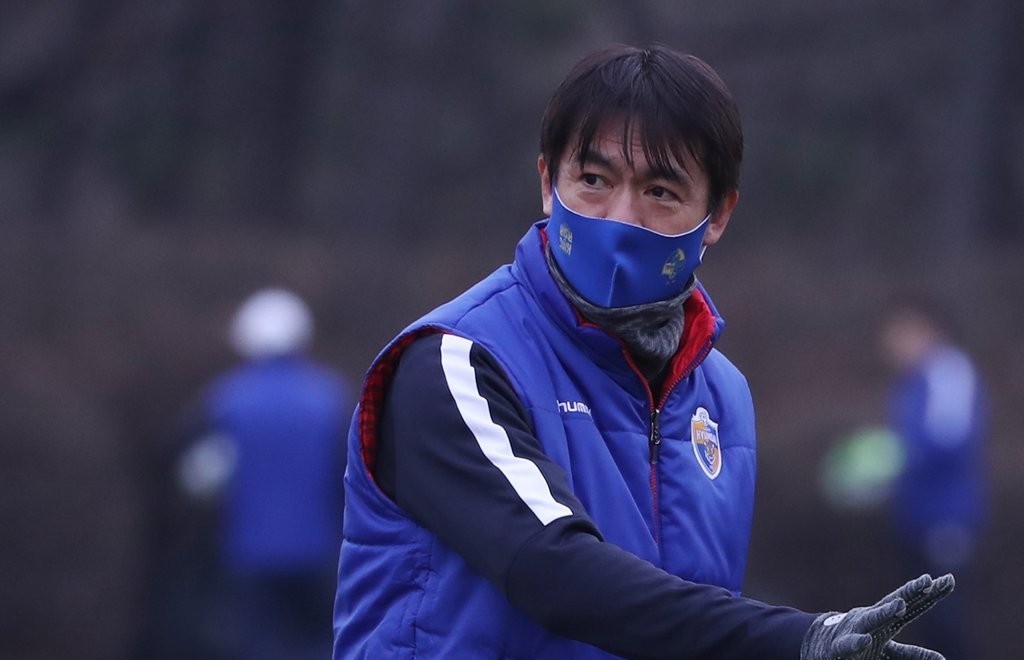 Hong Myung-bo, head coach of Ulsan Hyundai FC, directs his players during a practice session at Gangdong Football Stadium in Ulsan, 415 kilometers southeast of Seoul, on Jan. 11. (Yonhap)
When the South Korean football legend Hong Myung-bo met with his full squad for the first time as coach of Ulsan Hyundai FC on Monday, he didn't wax poetic on some trendy, modern strategies or formations.

Instead, Hong placed his focus on the mental part of the game.

"I spoke to the players about our three pillars for the upcoming season. They are: accountability, right attitude and happiness," Hong told reporters after his meeting with the players at the team's clubhouse in Ulsan, 415 kilometers southeast of Seoul.

"As professional athletes, they should hold themselves accountable," Hong explained. "Having the right attitude is really important. It's not so much about how they treat me. It's about their attitude toward the game of football, toward Ulsan and toward one another."

Hong said he also wanted his players to feel happy, regardless of match results.

"We'll have wins and losses, but as long as we're together, I hope everyone will feel happy playing football," Hong said. "I said we should try to build memories that will stay with us well after we retire."

Hong was one of the most beloved South Korean athletes in his time, and the former defender cemented his legacy as the captain of the national team that reached the semifinals at the 2002 FIFA World Cup on home soil.

He later coached South Korea to a bronze medal at the 2012 London Olympics -- the country's first Olympic medal in football -- but had a disappointing stint with the men's senior team at the 2014 FIFA World Cup in Brazil, where South Korea were knocked out in group stage.

After a brief coaching stint in China, Hong turned to football administration as the new executive director of the Korea Football Association (KFA) in 2017. He then returned to coaching by agreeing to take Ulsan's reins last month.

Hong held his inauguration ceremony last Thursday, but some players were missing. Ulsan had played and won the Asian Football Confederation (AFC) Champions League in Qatar on Dec. 19, and following the mandatory 14-day quarantine upon returning home, some players received an additional one-week break.

The full team was on hand for Monday's meeting.

As the AFC Champions League winners, Ulsan will represent Asia at the FIFA Club World Cup, which starts on Feb. 1 in Qatar. Hong and his players are scheduled to depart for Qatar on Jan. 29. (Yonhap)