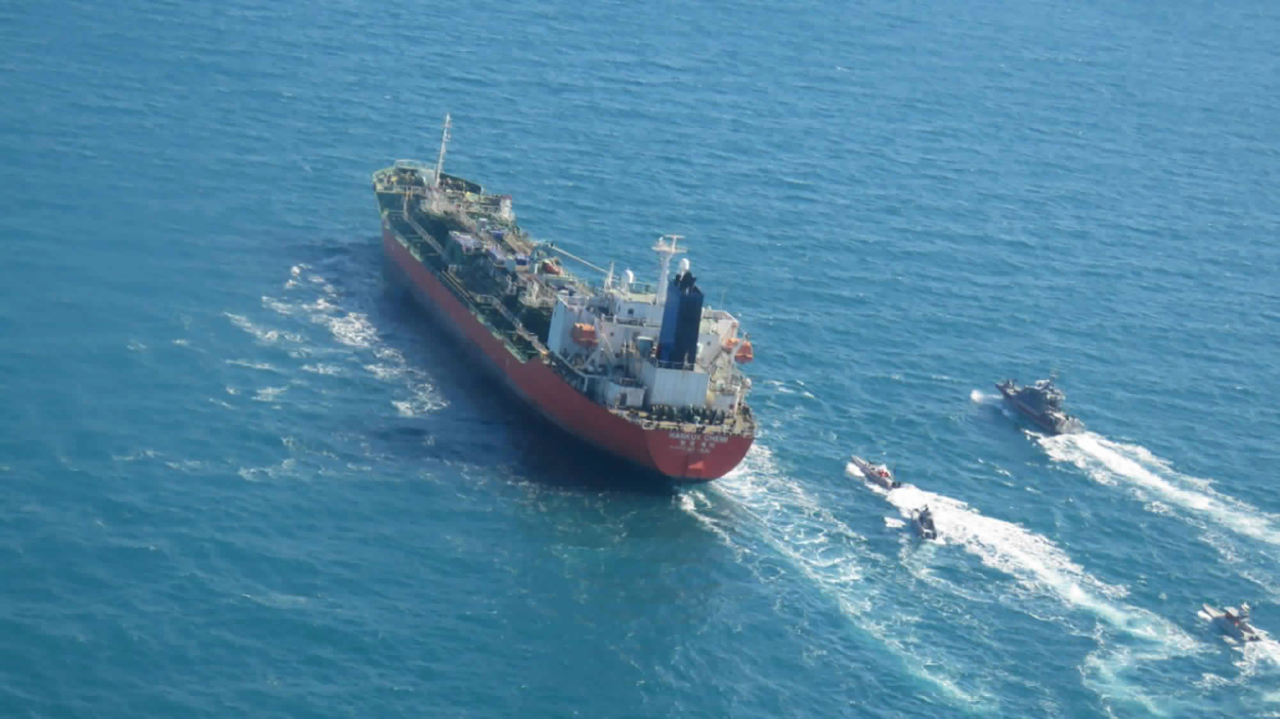 “I plan to meet my counterpart at the Iranian Foreign Ministry, and will meet others through various routes if that will help to resolve the issue of the ship’s seizure,” Koh Kyung-sok, director-general for African and Middle Eastern Affairs at the Foreign Ministry who is leading the delegation, told reporters at the Incheon International Airport, before departing for Iran.

Seoul has been scrambling to respond since Monday, when Iran’s Islamic Revolution Guards Corps seized the oil tanker MT Hankuk Chemi in the Persian Gulf, citing “environmental and chemical pollution concerns.” The vessel was carrying 7,200 tons of petrochemicals, according to Iranian authorities, and had 20 crew members on board -- 11 from Myanmar, five Koreans, two Indonesians and two Vietnamese.

On Thursday, the Foreign Ministry confirmed all sailors are safe and healthy, after South Korean Embassy officials met with one of the Korean crew members in Bandar Abbas, the port city on Iran’s southern coast where the ship is being held. The embassy will continue to provide necessary consular support, it said.

The Ministry spokesperson Choi Young-sam, quoting the Korean sailor, said there were no particular problems, such as violence, or with the way Iranian authorities treated crew members in the process of seizing the vessel.

The dispatch of the delegation arrives as Seoul and Iran are at odds on the grounds for the seizure. Iran says its forces detained the vessel for repeatedly violating environmental laws and would deal with the matter within the legal framework, while the vessel’s Busan-based operator flatly denied water pollution allegations.

Koh said he will request Iran provide related evidence that the detainment was due to what Iran described as a “technical issue.”

The seizure came as Seoul and Tehran were discussing frozen Iranian funds in Korean banks under US sanctions, raising speculation that the latest action was targeted to gain leverage and pressure Seoul into releasing the money.

About $7 billion in Iranian money from oil sales are frozen in Korean banks due to sanctions reimposed on Iran by the Donald Trump administration in 2018, after Washington’s unilateral decision to withdraw from the 2015 nuclear accord.

Iran has demanded South Korea unlock the funds, with the two sides and the US in talks to use part of the money to purchase COVID-19 vaccines and medical equipment for Iran.

A Foreign Ministry official said the negotiations to provide vaccines and equipment to Tehran are underway, but declined to disclose the amount.

Seoul’s First Vice Foreign Minister Choi Jong-kun is also planning to travel to Tehran early next week, and is expected to discuss the seizure, the frozen funds and other bilateral issues.