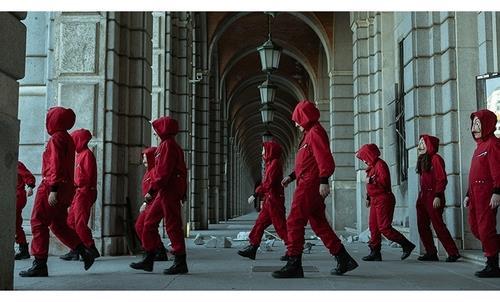 A scene from "Money Heist" (Netflix)
South Korea's TV series production houses have turned their eyes to hit Western shows as part of efforts to meet diversified demand of viewers across the world.

Chorokbaem Media, a local production company behind big-name TV series like "The Penthouse: War in Life" (2020) and "Memories of the Alhambra" (2018), will produce the Korean edition of "Criminal Justice," a popular crime drama on the BBC in 2008, later this year.

Titled "That Night," the remake will revolve around two men who are embroiled in the murder of a woman, starring top South Korean actors Kim Soo-hyun and Cha Seung-won.

Moreover, "Money Heist," a hit Netflix original made in Spain, will be also remade in South Korea.

The local version of the series will feature a group of a genius and thieves who team up to carry out a heist on the Korean Peninsula.

BH Entertainment and Zium Content will take charge of the reproduction, along with director Kim Hong-sun, who has created crime series like "The Guest" (2018) and "Voice" (2017). A detailed cast will be released later.

Last year, the Korean melodrama, "The World of the Married" (2020), based on the BBC One TV series "Doctor Foster," gained huge popularity at home and abroad.

It set a record high viewership of nearly 28.4 percent for a cable drama last year, while it was listed on popular TV shows in several Asian countries after being released on Netflix in July.

Experts noted that the recent increase in remakes of Western hit shows represents the expanded marketing strategy of the Korean entertainment scene.

"As global streaming services like Netflix have emerged as mainstream media, Korea-made content now has a bigger market beyond Asia," culture critic Kim Heon-shik said. "In the past, TV series are watched only by Korean viewers. But now, they have potential clients all over the world."

For the past decades, South Korean broadcasters have preferred Korean adaptations of Japanese original TV series, including the romantic comedies "Boys Over Flowers" (2009) and "He Who Can't Marry" (2009).

But in recent years, a growing number of Western TV series have been remade in Korea, such as ABC's "Designated Survivor," CBS' "The Good Wife" and BBC One's "Life on Mars."

"Full-fledged Korean TV shows and films have established a strong foothold in the global entertainment scene thanks to recent hits like 'Sweet Home,'" said the expert, referring to the horror show ranking third on Netflix's most-watched TV show list in its first week.

"Korea-made content is very bankable in the world, and it is also easier for producers and platform operators to promote their shows based on European or American hits to the global viewers," he said. (Yonhap)