Experts introduce the facility during the opening showcase of Metro Farm at Sangdo Station in September 2019.(Farm8)
Walking down the stairs from exit No. 2 of Sangdo Station in southwestern Seoul, its not easy to miss a white and green signboard that reads “METRO Farm.”

A method of what‘s known as “smart farming,” Metro Farms can create nature-friendly environments while being located inside urban subway stations, using AI and Internet of Things (IoT) technologies.

Sangdo Station’s exit No. 2 was originally left unattended, merely serving its purpose as a meet-up plaza. Since September 2019, the space is now a farm full of sprouts and herbs.

The 394-square-meter cultivation facility is a complex space consisting of an “Auto-Farm,“ where robots manage basic sowing and harvesting, a “Farm Cafe,” which sells fresh salad and juice, made from crops harvested on the same day, and “FarmX,” a zone where visitors can learn about the future of agriculture.

The Seoul Metropolitan Government, Seoul Metro, and the agriculture company Farm8 have come together for this project. In 2004, Farm8 started out as a firm that produced and distributed vegetable salads. Over time, the company shifted gears to conduct research on indoor farming as a method of sustainable agriculture that can operate regardless of weather conditions and has succeeded in developing high-tech distribution centers.

The three organizations worked together to enhance the ecological sensitivity of Seoul as a city, and allow young people living in urban districts to experience agriculture with their own eyes. 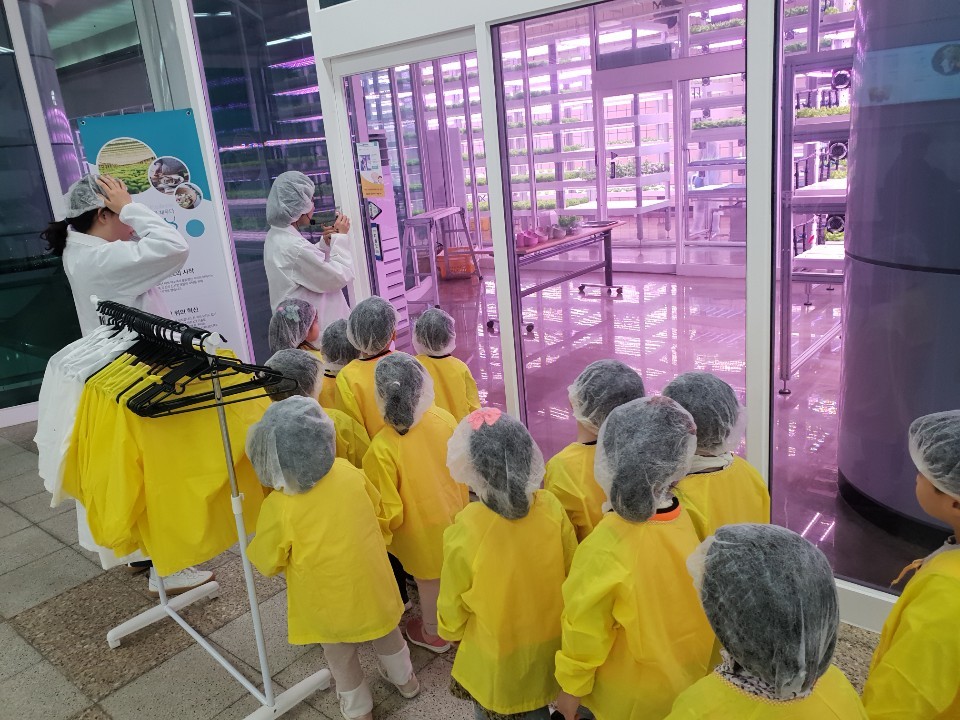 Children line up in front of a Metro Farm to experience and learn about agriculture in January 2020.(Farm8)
“We tried our best to make Metro Farms a lively experience, where visitors can get a grasp of its possibilities and to be recognized a place where technology meets nature,” senior manager of Farm8 Yeo Chan-dong told The Korea Herald.

Since the very first showcase of Metro Farm at Dapsimni Station in eastern Seoul in May 2019, Yeo explained that they have made progress in creating urban agricultural jobs and expanded Metro Farms across the city.

An average 7.5 million people take the subway each day in Seoul, according to Seoul Metro. This means that passersby will naturally encounter Metro Farms on their way to work, home or to meet family and friends.

“Our assignment for the new year is to make Metro Farms more popular and sustainable,” Yeo spoke with confidence, “In other words, not only presenting the experience, but eventually making a system for the crops grown to be made a competitive quality to suit the needs of the public.”