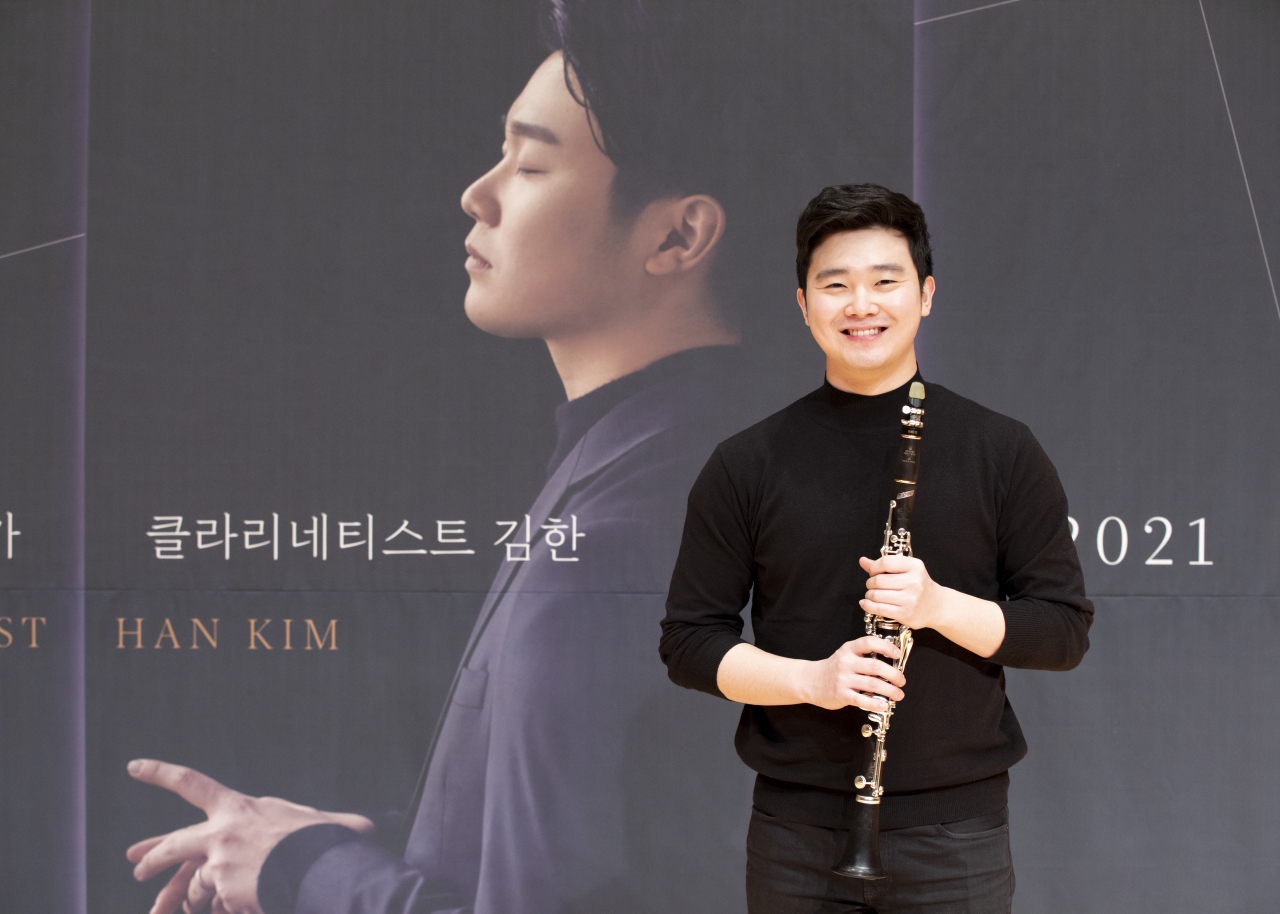 Clarinet player Kim Han poses for photos during an online press conference held Monday at the Kumho Art Hall Yonsei in western Seoul. (Kumho Art Cultural Foundation)
Clarinetist Kim Han hopes to show off the charms of the clarinet through a series of four recitals slated to take place at the Kumho Art Hall as its artist-in-residence for this year.

Each year, the art hall, run by the Kumho Art Cultural Foundation, selects a classical musician under the age of 30 in the early stages of their career to provide an opportunity for the musician to further develop by offering a performance venue.

The 25-year-old clarinetist will present four recitals at the concert hall under the season program titled “On Air,” performing a diverse repertoire from Mozart to Yun I-sang.

“It has been 14 years since I first began to perform at the Kumho Art Hall. It is a hall truly like home to me. It is as if I were being acknowledged as an artist capable of leading a whole season’s program,” Kim said during an online press conference held Monday.

Kim debuted through the art hall’s Kumho Prodigy Concert at the age of 11.

“The Kumho Art Hall’s artist-in-residence program has introduced pianists, cellists and violinists. So I was bewildered that it would be me, a clarinetist, this year. It is an exciting project.”

Through the program, Kim hopes to showcase the unique qualities of the clarinet, introducing a wide range of work in his repertoire, spanning from classical music to contemporary music and even jazz.

While his recital in June presents more classic works such as clarinet quintet pieces by Mozart and Brahms, Kim’s last concert of the year “Be My Guest,” scheduled for December, will be joined by a jazz ensemble, presenting works by George Gershwin, Leonard Bernstein and Benny Goodman.

“Much of the repertoire is from the 20th century, as the clarinet is an instrument that began to receive attention rather recently. Through the contemporary works, we can indirectly experience the composers’ times. After all, music is about empathizing with others,” he said.

Though devoted to his career as a soloist, Kim is also passionate about other performance forms, from chamber to orchestral performances. Kim is the second solo clarinetist of the Finnish Radio Symphony Orchestra since 2018.

“The Finnish Radio Symphony Orchestra is the No. 1 orchestra of Finland, showing the colors of the nation,” Kim said, expressing his pride in the state orchestra.

“The orchestra supports its members participating in non-orchestral music performances such as chamber music and solo recitals. Thinking I would become the face of the orchestra when I play elsewhere, the orchestra encourages me to perform at other occasions,” he said

Kim’s first recital “Back to the Future” will be held Thursday. More recitals will follow on June 3, Oct. 7 and Dec. 30.

Complying with the government’s social distancing rules, two-thirds of the seats will be left empty at this week’s event.

For more information about the upcoming events, visit www.kumhoarthall.com.