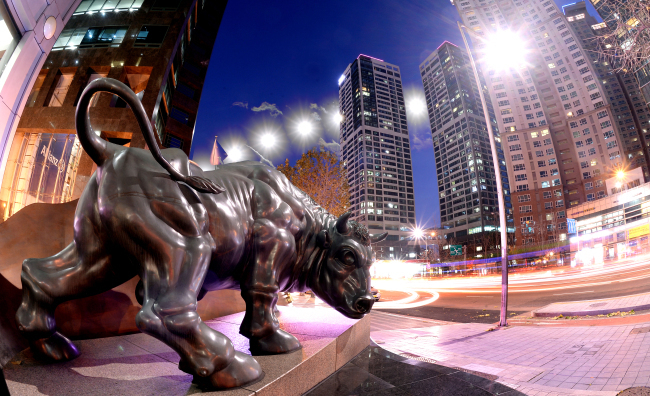 A bull statue in front of the Korea Financial Investment Association headquarters in Seoul. (Herald DB)
Cho Young-hoon, a 40-year-old office worker living in Seoul, had no interest in capital investment, before the pandemic hit last year.

Following in his parents’ footsteps, he strongly believed in real estate investment, and considered buying stocks to be too risky and not as profitable as owning an apartment in Seoul.

Buying an apartment using his savings, jeonse deposit and a mortgage loan was his strategy for over a decade. But then, in December 2019, the government made an unprecedented announcement that banned home mortgage loans that exceeded 1.5 billion won ($1.3 million). And two months later, the stock market crashed due to pandemic fears.

”I had no choice but to turn my eyes to the stock market, since I was not able to buy an apartment with the mortgage ban and there‘s no way I can get a house of my own only with my income,“ he said. ”I believed that stocks will rebound eventually from what I have witnessed in 2008. And it did, sooner than I expected.”

Cho is one of millions of small individual investors who spearheaded the retail wave in South Korea’s domestic stock market last year.

Dubbed “ant warriors,” the Korean retail investors hunted for stocks that grew cheap during the early stage of the coronavirus pandemic, took advantage of market liquidity and bet on post-pandemic recovery.

They still believe real estate ownership is essential to pursue wealth. But diversifying one’s portfolio with a portion of equity investment is important to seek profit in the post-pandemic era, despite lingering concerns over a possible bubble burst.

Ant warriors transacted some 8 trillion won worth of shares each day on average through 2020, up over threefold from a year prior, when buying listed stocks on the Korea Exchange’s main board Kospi, data on the KRX showed Sunday. Retail investors took up two-thirds of all transactions on the bourse.

Moreover, individuals net bought shares worth 29.7 trillion won on the Kospi from March 19 until the final trading day of 2020 on Wednesday, unlike previous financial crises when they were net sellers, according to the KRX.

Market watchers say retail investors are likely to inject an even greater amount of capital into stocks in 2021. They also expect Kospi to reach up to 3,300 points and Kosdaq to cross 1,000 points.

“As long as the government continues its current stance toward real estate regulations, more money will further flow into stock markets,” said Choi Yoo-june, an analyst at Shinhan Investment.

“Market liquidity to tackle the economic crisis amid the prolonged pandemic is expected to remain abundant for a while. Therefore, small investors will continue to buoy the stock market as they got a taste of stock investment generating gains.”

About 61 percent of overseas stock transactions were made in the US stock market, while their top pick stocks were the world’s No. 1 electric vehicle maker Tesla, US-based tech giant Apple, online retail giant Amazon, tech leader Microsoft and graphic chip maker Nvidia.

Market experts attributed the investors’ growing interest in the US stocks as local stocks trapped in a “box pattern” for several years until lately. Amid the fast-recovering Chinese economy, they have scooped up shares from the Hong Kong and China markets as well.

Mega IPOs up for grabs

Riding on ample liquidity, small domestic investors also flocked to the local initial public offering market as they placed an unprecedentedly large amount of bids in 2020.

The number of newly listed firms on Kospi and Kosdaq markets, excluding special purpose acquisition companies came to 76 last year, up by 1 from a year ago, according to a local consulting firm IR Kudos.

But the combined IPO proceeds throughout the year came to 5.79 trillion won, up 51.9 percent from the previous year. The volume of IPO bids for the retail subscription also reached its all-time high of 295.5 trillion in the local market history, over three times the number in 2019, the data showed. The average stock price rise of newly listed stocks last year marked 68.5 percent, setting the biggest increase over the past 10 years, according to the Korea Exchange.

Among major IPOs, Myoung Shin Industry’s shares spiked 602.3 percent from its offering price, while SK Biopharmaceuticals and Kakao Games surged 244.9 percent and 91.7 percent, respectively, on the last trading session of 2020.

While the biggest IPO of the year was Big Hit Entertainment valued at 962.6 billion won, a series of big IPO deals fetching over 1 trillion won are coming up this year.

Retail investors are taking aim at such blockbuster IPO deals as LG Energy Solution, SK Bioscience, Kakao Bank, Kakao Pay and Kakao Page, which are forecast to raise roughly a combined 15 trillion won if all plans proceed as planned, according to Lee So-joong, an analyst at SK Securities.

“Considering the estimated offering size of big deals in 2021, the size of local IPO market is anticipated to be bigger than the record scale seen in 2017 in the past five years,” Lee said.

Moreover, regulatory changes are likely to further attract more retail investors to the market, she said. The financial authorities in November rolled out plans to increase the IPO share allocations to small investors to a maximum 30 percent, from 20 percent then, in a bid to sustain the bullish market trend. Also, half of the retail investor allocations will go to those who put the minimum amount of subscription bids on the basis of a draw of lots.

“Due to the changes in the public IPO subscription rules, more investors with small budgets are given chances to participate in the subscription. With the small subscribers’ favorable condition, more retail investors will rush to major IPO bids,” the expert added. 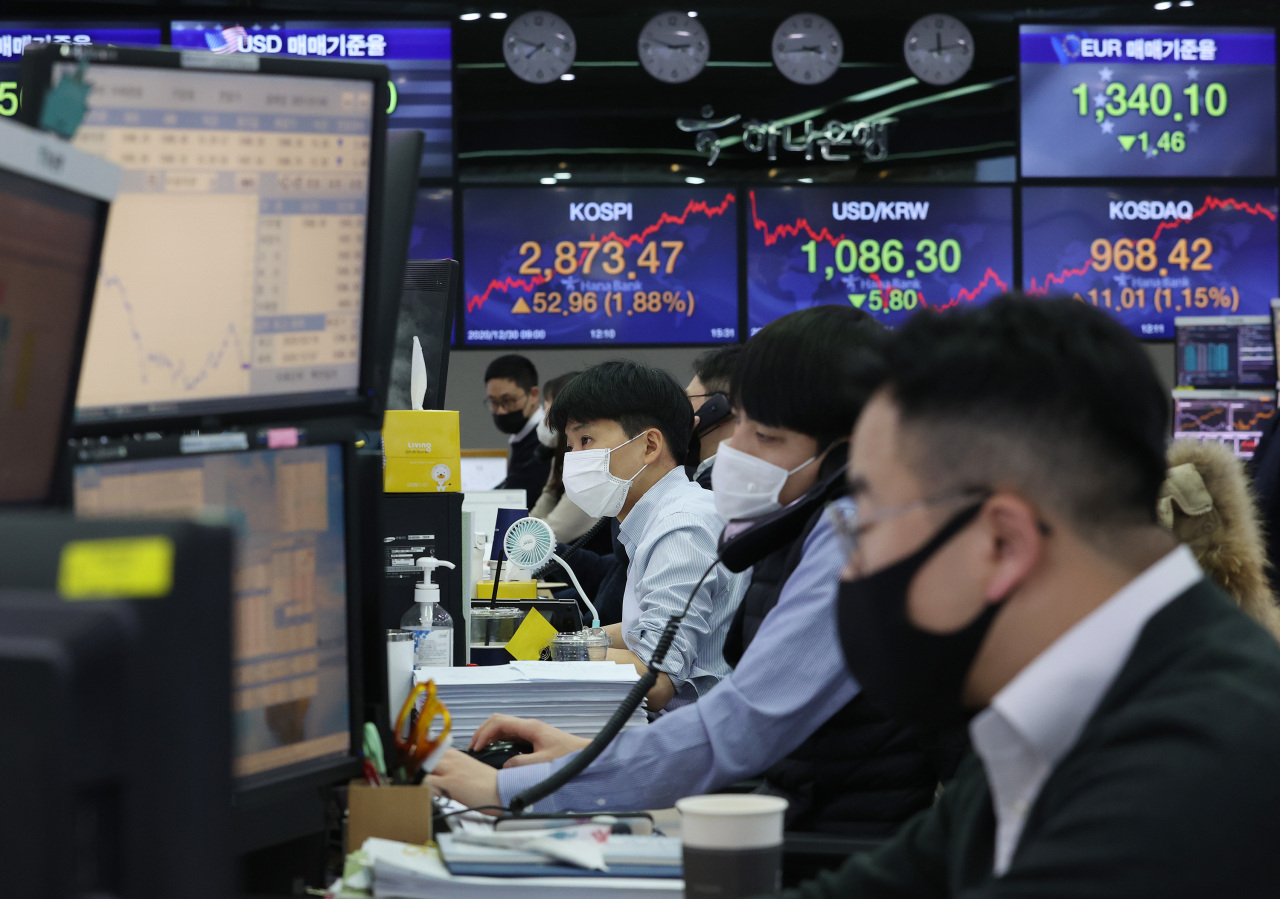 Hana Bank’s dealers in Seoul wrap up the final session of stock, foreign currency trading of the year 2020 with Kospi closing by hitting another fresh high Thursday. The rising power of small investors appears to have left the stock market’s year-end rally unperturbed, according to analysts. (Yonhap)
Diversifying targets

The coronavirus turmoil not only induced Korean retail investors to listed stocks, but also prompted retail attention to a wider array of investment products such as exchange-traded funds and real estate investment trusts.

Individuals took up nearly 45 percent of the entire 953.1 trillion won transaction volume of ETFs in Korea last year, according to data by the KRX. Both retail transactions and the entire transactions rose threefold compared to the previous year.

This represents the growing presence of ETFs in the market where its 468 listed products‘ combined net asset value came to 51.6 trillion won as of Tuesday. The products allow the investors’ exposure to the diversified basket of assets, tracking stocks, bonds, commodities and alternatives.

But according to a report by Shinhan BNP Paribas Asset Management in December, almost 90 percent of ETF transactions were seen among the top 10 products -- nearly half of which used derivatives for excess returns.

Meanwhile, more listed REITs opened doors to more retail investors last year. Of the total 13 listed REITs here, six began trading on the stock market in 2020. The underlying assets of those debuted in the same year ranged from logistics centers to gas stations, offices at home and abroad, a commercial complex and houses. Their combined assets under management came to 5.8 trillion won as of November.

The REIT market, however, appears to be small in size compared with other markets.

As of October, the combined market cap of all REITs in Korea amounted to 0.2 percent of its gross domestic product, showing contrast with Singapore (18.1 percent), Australia (6.1 percent), the United States (5 percent) and Japan (2.4 percent), according to an estimate by Korea Association of Real Estate Investment Trusts.

Deregulation is key to inducing more retail investors to listed REITs, experts said, adding REIT management firms are less incentivized to list their REITs and their growth is being stalled under the current environment.

“A listed REIT in Korea is facing restrictions when it comes to adding portfolio assets, curbing the growth of listed REITs,” wrote Kim Pil-kyu, senior research fellow at the Korea Capital Market Institute in December, adding more listing of REITs will contribute to the higher REIT market transparency.

On the other hand, as retail investors started to develop an eye for an individual target stock, their appetite for indirect investment via stock funds has been on the decline.

As a result, less than 25 percent of individual fund buyers’ money was exposed to stocks as of October, seeing a constant decline from 41 percent in end-2015, the report also showed. Also, the size of stock funds sold publicly shrank by 14.4 percent last year as of November, despite their 19.1 percent returns for the 11 months.

Sales of funds to retail investors dropped in the previous year. Individuals bought 942 trillion won worth of public fund products in the January-November period, down 1.3 percent on-year, according to data from the Kofia. The sales of private funds to retail investors fell 19.4 percent on-year to 224 trillion won during the same period, showing contrast with the rise of total sales of private funds by 13.5 percent.