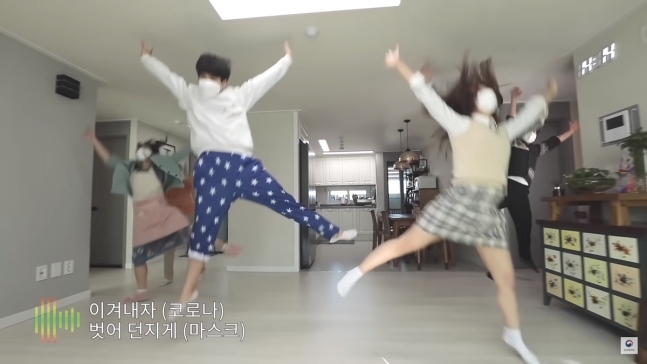 The video, uploaded New Year’s Day and deleted Saturday, drew criticism for being out of touch with the people as most of South Korea’s population lives in apartments.

The ministry apologized in a statement on Facebook, saying the video -- promoting dancing as a way to cope with the pandemic -- failed to consider “multiple issues including noise between floors.”

“We apologize to the public. We have now made the video private,” the ministry said.

The video shows five members of a family doing household chores in an apartment before being joined by a TV reporter and breaking out into a dance.

Gatherings of five people or more are banned in Seoul and the surrounding area, and the same rule is set to take effect nationwide Monday. Families living in the same household are an exception.

The dancers jump in unison at one point as the song goes, “Go away, stress. Go away, coronavirus.”

According to recent data from Statistics Korea, nearly 6 in 10 dwellings throughout the country were apartments as of last year.

The backlash comes as the government had to defend its late entry in the vaccine race in recent weeks as critics accused them of celebrating the country’s handling of the pandemic – also known as the K-Quarantine Model -- too soon.

In July, the US signed a deal with Pfizer and BioNTech to buy 100 million doses of their COVID-19 vaccine. Japan also struck a deal to buy their vaccine for 60 million people the same month.

In early December, Korea said it had “secured” COVID-19 vaccines for 44 million people though it had signed an official contract only with AstraZeneca for 10 million people at that time.

The announcements of a deal with Pfizer, Janssen and Moderna came weeks later.