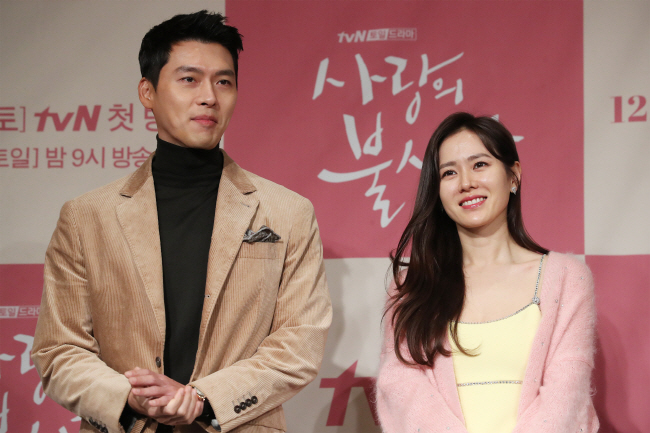 Actor Hyun Bin (from left) and actress Son Ye-jin (right) pose at a press conference in Seoul on Dec. 9, 2019. (Yonhap)
Star actor Hyun Bin and his on-screen partner in the hit drama "Crash Landing On You," Son Ye-jin, have been dating for eight months, their agencies confirmed Friday.

"The two have become intimate as co-stars and have developed such intimacy into a romantic one as lovers after the series concluded," said VAST Entertainment, the management of Hyun Bin, in a statement.

The two had repeatedly denied the dating rumors. Rumors had particularly intensified during their costarring on "Crash Landing On You," tvN's hit rom-com TV series that launched in December 2019, even followed by reports that the two were arranging a wedding.

The acknowledgement also came from Son's agency, including the fact that the relationship began in March, a month after the conclusion of the TV show.

Hyun and Son, both born in 1982, achieved global fame on both the small and silver screens of various genres.

Hyun rose to stardom in 2003 via the sitcom "Nonstop 4" and became an Asian heartthrob by starring in "My Lovely Sam-soon."

Success of romantic TV series "Worlds Within" and "Secret Garden" made him a globally published star, in addition to his relatively recent works that include "Memories of the Alhambra" and "Crash Landing On You."

Son emerged as the nation's "first love icon" via the films "Lover's Concerto" and "The Classic." Son earned acclamation from movie lovers by perfecting her role in films "A Moment to Remember" and "The Last Princess." She earned her place as a rom-com queen through multiple hit TV shows, including "Something in the Rain" and "Crash Landing on You." (Yonhap)