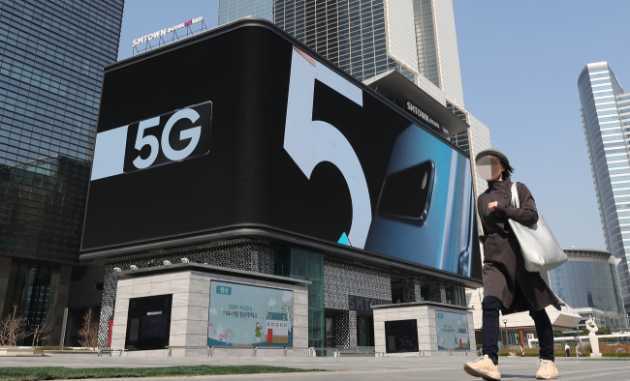 (Yonhap)
South Korea‘s 5G quality and coverage have slightly improved in the second half of the year, said the Ministry of Science and ICT on Wednesday. The overall quality of Long-Term Evolution networks here, however, have degraded, it said in a report.

SK Telecom’s 5G network showed the fastest average download speed at 795.57 megabits per second. KT followed at 667.48 Mbps, with LG U+ at 608.49 Mbps. SKT is the country‘s largest mobile carrier in terms of subscribers, followed by KT and LG U+ in second and third place.

The number of subway stations equipped with 5G networks rose to 424 as of November, compared to 313 in July, according to the report. The number of public facilities covered by 5G networks also reached 3,486 across 85 cities.

The ministry also revealed the rate of 5G switching over to LTE due to high network traffic, which has been a consistent source of consumer complaints. On average, the rate of the switch during downloads came at 5.4 percent, improving from 6.1 percent in the first half of the year.

KT‘s 5G networks showed the highest switching rate, 8 percent, followed by LG U+ with 4 percent and SKT with 3.5 percent.

KT explained that the company made a major investment in November to improve its 5G network infrastructure, but it was not calculated into the government’s latest report. KT added that figures related to quality and coverage will improve in the next report.

Meanwhile, the overall quality of LTE in South Korea has been downgraded. The average download speed of LTE networks decreased to 153.1 Mbps from 158.5 last year.

A ministry official said the decrease was largely due to the networks’ relatively poor performance in small and midsized cities, as well as in rural areas.

The ICT Ministry’s official said it will continue to assess the quality and coverage of the local 5G network next year. How many times it would issue reports, however, remains undecided, the official added.

The ICT Ministry this year decided to release reports on local telecommunications networks, with an aim of promoting growth of the next-generation 5G network.