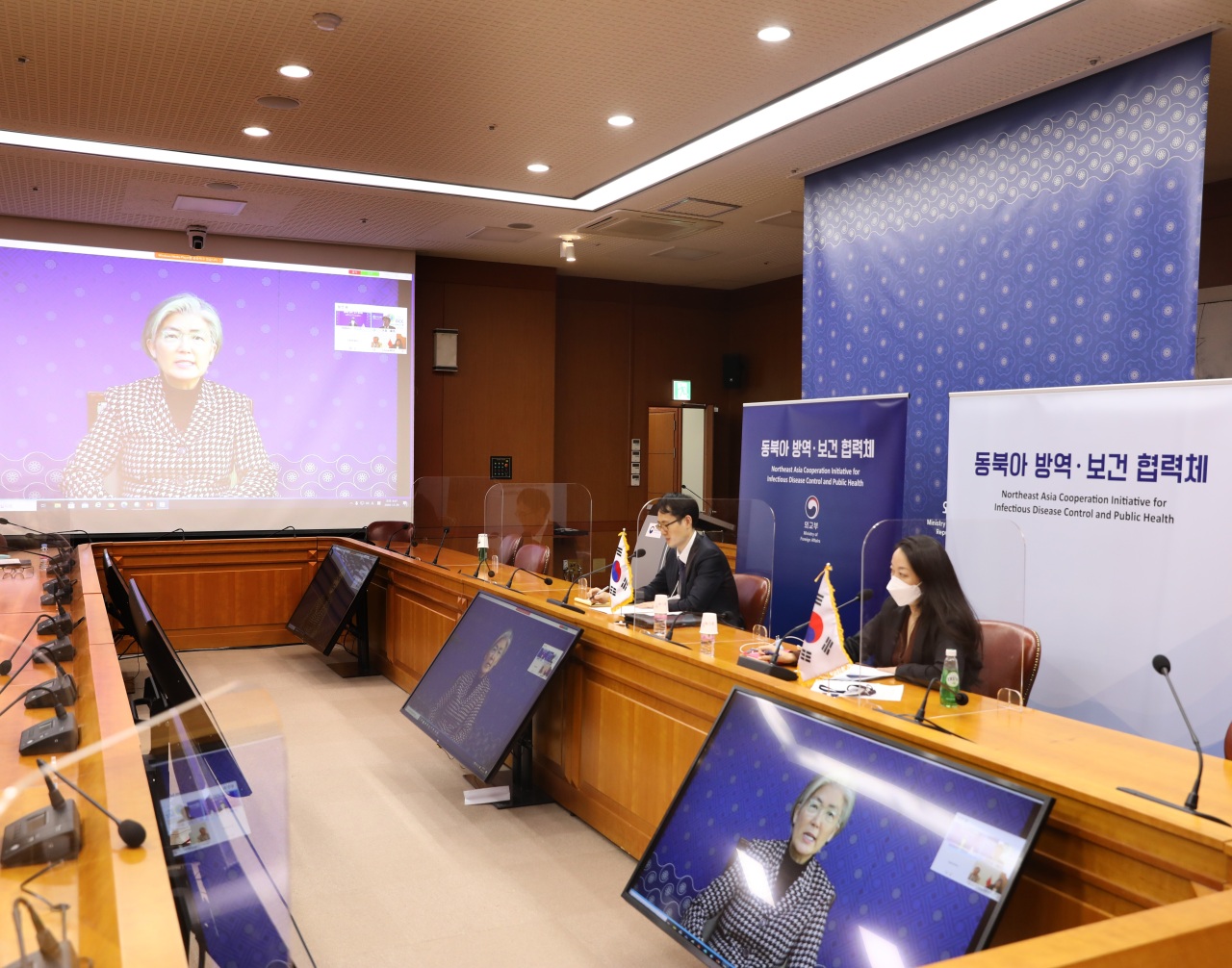 Foreign Minister Kang Kyung-wha (on screen) speaks during a virtual session of the Northeast Asia Conference on Health Security at the foreign ministry in Seoul on Tuesday. (Ministry of Foreign Affairs)

South Korean Foreign Minister Kang Kyung-wha expressed hope for North Korea to join a new regional cooperative initiative on public health, noting Pyongyang’s participation could lay the foundation for peace on the Korean Peninsula and beyond.

She made the remarks during the inaugural session of the Northeast Asia Conference on Health Security on Tuesday evening. The forum is based on President Moon Jae-in’s proposal at the United Nations in September to launch a “Northeast Asia Cooperation Initiative” for public health and infectious disease, such as COVID-19.

“South and the North Korea are bound in a single community of life and safety, affected by common threats such as infectious diseases and natural disasters,” Kang said. “I hope to welcome North Korea to this initiative in the near future. Its participation would surely be in the public health interest of North Korea as well as of all neighboring countries.”

“The spirit of inclusive cooperation and solidarity that the initiative would nurture would also strengthen the efforts to lay the groundwork for peace and prosperity on the Korean Peninsula, Northeast Asia and beyond.“

Kang stressed the importance of sharing experiences and knowledge in dealing with COVID-19 as well as other “emerging transboundary health risks” in the long run.

“By addressing challenges together, we will be able to unleash the full potential for cooperation among regional partners,” she said.

The meeting was attended by government officials and civilian experts from six countries, including South Korea, US, China, Japan, Russia and Mongolia.

Japan attended the meeting, but is still mulling on whether to take part as a regular member of the initiative, while North Korea hasn’t responded to the proposal.

Pyongyang has been unresponsive to any of Seoul’s calls to cooperate on anti-virus efforts.

During the meeting, the participants shared how they have responded to COVID-19, and discussed ways to cooperate and policy directions regarding the trans-border public health crisis. They also decided to continue consultations to expand the group to include other countries.