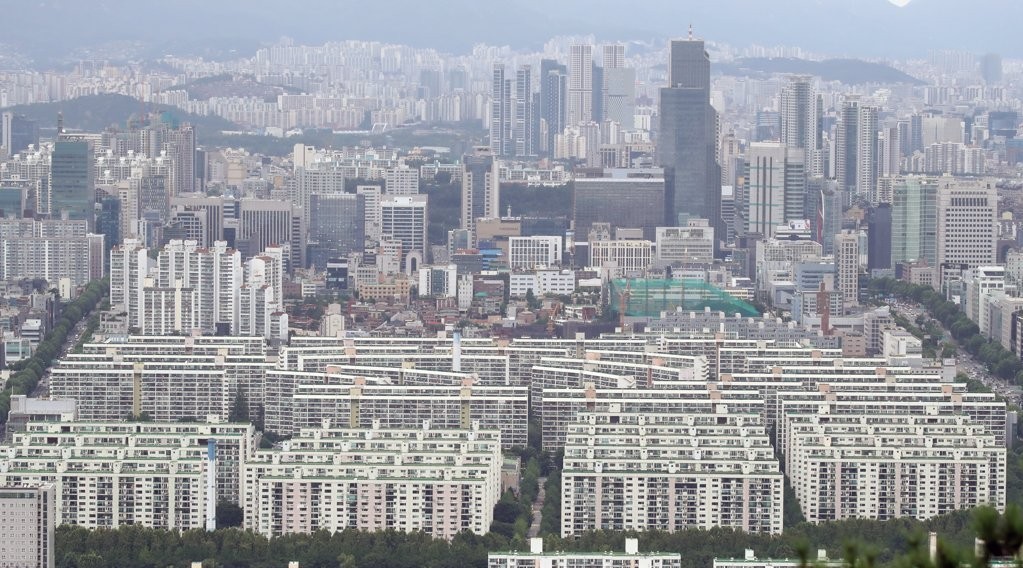 The photo shows apartment complexes in Seoul on July 28. (Yonhap)
South Korea’s housing price rally, sparked by a supply shortage and tightened regulations throughout the year, is likely to continue next year, stoking concerns about housing market instability.

According to KB Financial Group in a report, housing prices across the country will see an upward march overall next year while two-year rentals requiring a refundable lump-sum deposit in lieu of monthly rent, called “jeonse,” will also be more expensive.

The report, based on a survey of 161 local property experts from Dec. 10 to 15, showed that 39 percent of the respondents predicted that home prices in Seoul and nearby cities will grow at a rate of 5 percent or higher next year while 39 percent said other cities across the nation will likely see a 1 percent to 3 percent increase on average.

The supply shortage and rising demand due to rental hikes were the main reasons given for the expected price increase in the Greater Seoul area next year. High liquidity and demand for property purchases will likely drive up home prices in other regions, according to the report.

Toughened rules on taxes and loans were picked as key factors that could drag down housing prices. The experts cited the economic downturn and hefty taxes as the main culprits in potential property price drops in regions other than Seoul.

When it comes to jeonse prices, 33 percent of the experts forecast that the two-year rental prices will jump by 7 percent or higher in the Greater Seoul area, compared with 5 percent or less across the nation. Jeonse price growth next year was anticipated to be driven by a supply shortage and high demand.

“One of the crucial issues in the property market next year will be about how to stabilize the heated market,” said an official at KB Research, a market research unit of the financial firm.

“Skyrocketing rental prices, tax burdens on multiple-home owners, and the still-ongoing coronavirus pandemic will be some of the important issues in the market as well.”

The Bank of Korea’s recent data also showed that the consumer sentiment index for future housing prices spiked to an all-time high of 132 this month. A reading above 100 means more people expect price increases than those anticipating price drops.

“The rising apartment prices across the nation have attributed to the increase of the index,” an official from the central bank.

Meanwhile, a separate report published by commercial bank KB Kookmin Bank showed that 14 districts located in the northern part of the capital saw their median apartment price rise 2.93 percent to 820 million won ($751,057) in December, crossing the 800 million won mark for the first time since the related data started to be compiled in December 2008. The median price in the district stood at 643 million won in January this year.

The northern part of the city, called Gangbuk, meaning north of the Han River, is considered relatively affordable. Gangnam, on the other hand, refers to the posh districts in southern Seoul. The Gangnam region saw its median home price increase 35 million won over the course of the year -- from 912 million won in January to 947 million won this month.

The report concluded that strict government restrictions on taxes and mortgages managed put a lid on housing prices in the Gangnam region this year, but pushed homebuyers to flock to the northern part of the city.

The jeonse supply shortage, caused by government rules that allow tenants to extend their two-year contracts for an additional two years, also nudged people to purchase homes in the city’s northern districts, according to the bank’s report.