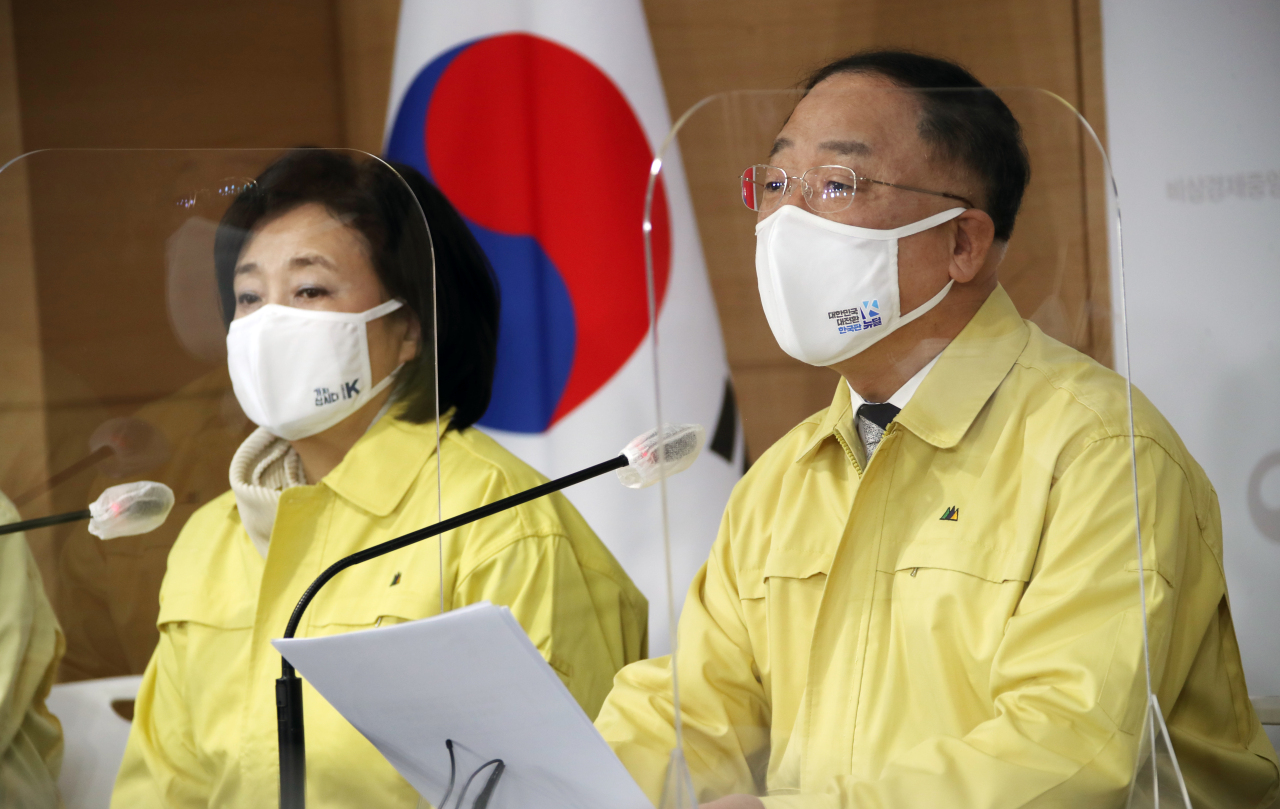 Finance Minister Hong Nam-ki (right) speaks during a press conference to announce a fresh economic relief package in response to a third wave of COVID-19 infections, at the government complex in Seoul, Tuesday. (Yonhap)
South Korea has unveiled the third batch of its economic relief package worth 9.3 trillion won ($8.49 billion) to support the country‘s small businesses and contract workers hit hard by the COVID-19 pandemic, amid growing fears of a virus resurgence and its impact on slowing down the economic recovery.

Under the government plan, some 5.8 million people will benefit from the aid program. Direct cash payments will begin Jan. 11.

A swift economic recovery and finding a solution to inequality exacerbated by COVID-19 are the biggest challenges the country faces, President Moon Jae-in said during this year’s last Cabinet meeting held at Cheong Wa Dae in Seoul.

“The economic relief package is tailored to protect small business owners and vulnerable workers who have been suffering damage due to the government’s virus containment measures,“ he said. ”As there’s no time to lose. The aid package will be executed promptly, as soon as early January next year,” he added.

Of the newly added amount, 5.6 trillion won will be allocated to small businesses mainly in the form of rent assistance and to contract workers and freelancers who are bearing the brunt of the coronavirus-led crisis. Some 2.9 trillion won will be given to companies that maintain their contracts with employees and used for small and medium-sized enterprises in need of emergency funds to stay afloat.

The third round of the emergency relief package comes as the country raised its social distancing level in early December following a spike in COVID-19 cases, chiefly in Seoul and surrounding areas, home to a half of its 51.6 million population.

The latest relief program is to mitigate the financial burden on small merchants and self-employed people who suspended their businesses to curb the spread of transmissions in line with the government‘s measures.

Concerns are mounting now as a third wave of coronavirus outbreaks could slow down economic recovery momentum that had gained pace in the third quarter. The nation’s gross domestic product rebounded 1.9 percent quarter over quarter in the three months to September, after shrinking 3.2 percent on-quarter in the previous period.

Finance Minister Hong Nam-ki said the relief package can be regarded as the country’s fifth supplementary budget, given its size that exceeds its fourth extra budget worth 7.8 trillion, which was approved in September.

“The government will provide cash directly to 2.8 million small merchants with annual sales of less than 400 million won whose businesses suffered losses as the consequence of toughened social distancing regulations,” he said.

In detail, 2 million won will be given in cash to small business owners who run restaurants and coffee shops. Those who are forced to shut down their businesses entirely due to toughened schemes, including indoor gyms, private educational institutes and clubs, will receive 3 million won.

The government will provide low-interest loans and lower insurance costs to ease the burden of fixed costs for small business sites.

One trillion won will be offered in loans to 100,000 small merchants who were forced suspend their businesses with an annual interest rate of 1.9 percent.

A total of 800 billion won is earmarked to strengthen the country’s virus prevention measures by setting up 152 new makeshift COVID-19 testing sites and operating state-run quarantine centers for individuals arriving from overseas.

The relief fund plan will be subject to Cabinet approval during a meeting slated for Jan. 5.