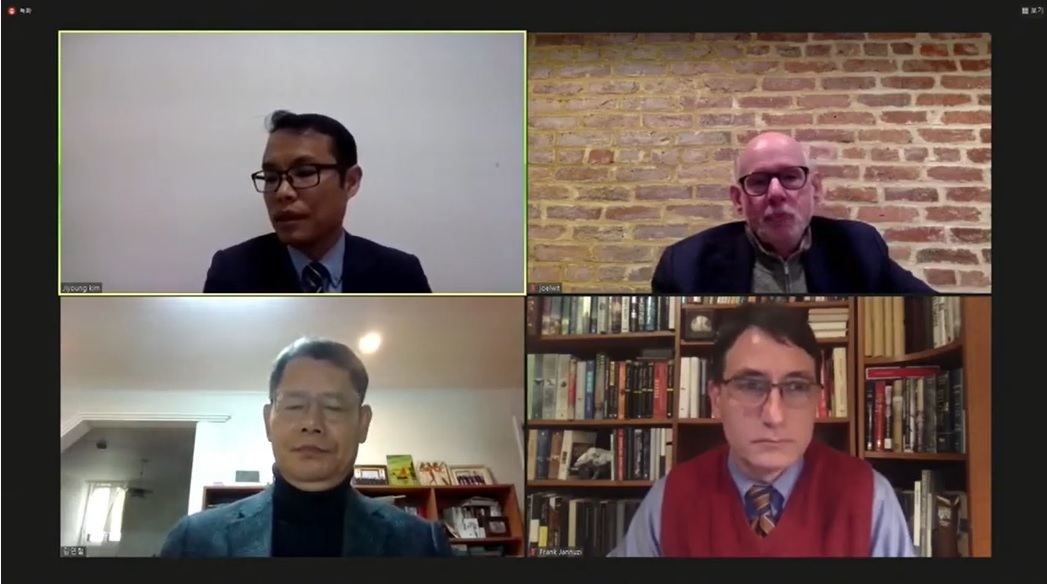 (Clockwise from top left corner) Professor Kim Ji Young of Institution for Unification Education of the Ministry of Unification, Joel Wit, a senior fellow at the Stimson Center, Frank Jannuzi, president of the Mansfield Foundation, and Kim Yeon-chul, former Unification Minister, speak during a videoconference on Friday. (YouTube)
Former Unification Minister Kim Yeon-chul on Friday called on the incoming Joe Biden administration to be flexible on using sanctions against Pyongyang in achieving denuclearization.

“Ultimately, sanctions are not a purpose, but a means. It is Biden administration’s task to use it flexibly,” Kim said during a videoconference organized by the Unification Ministry on Friday, adding the Donald Trump administration had taken a “rigid” approach in working with sanctions against Pyongyang.

Kim, who led the ministry for little over a year until June this year, assessed that Pyongyang was facing economic difficulties due to prolonged international sanctions and COVID-19 pandemics.

“While many expect the North will make concessions in diplomatic negotiations because its (situation) is difficult, it could rather take more of a ‘self-reliance’ path, considering past cases,” he said. “I think it’s more important to consider how to persuade Pyongyang.”

He proposed holding four-party talks, including the two Koreas, China and the US, for negotiating denuclearization, noting Beijing and Pyongyang have become very close economically, militarily and politically in comparison to the past.

Once the four-party talks takes place to closely consult denuclearization and the peace process on the Korean Peninsula, it can expand to six-party talks to include Japan and Russia, he added.

Frank Jannuzi, president of the Mansfield Foundation and formerly Biden’s longtime foreign policy aide in the Senate, also stressed China’s role in bringing the North back to the negotiating table.

“While it is true China’s role has not always been constructive and the current situation is judged by some even to be pernicious, I don’t think we can escape China’s role in all of this,” he said. “They are going to be a party to any peace and any denuclearization agreement at the end of the day. They are going to be an important guarantor, addressing the needs of the DPRK per security.”

Meanwhile, Joel Wit, a senior fellow at the Stimson Center and founder of the 38 North website, put emphasis on the role of South Korea and the US, and less on China and Japan in the denuclearization process.