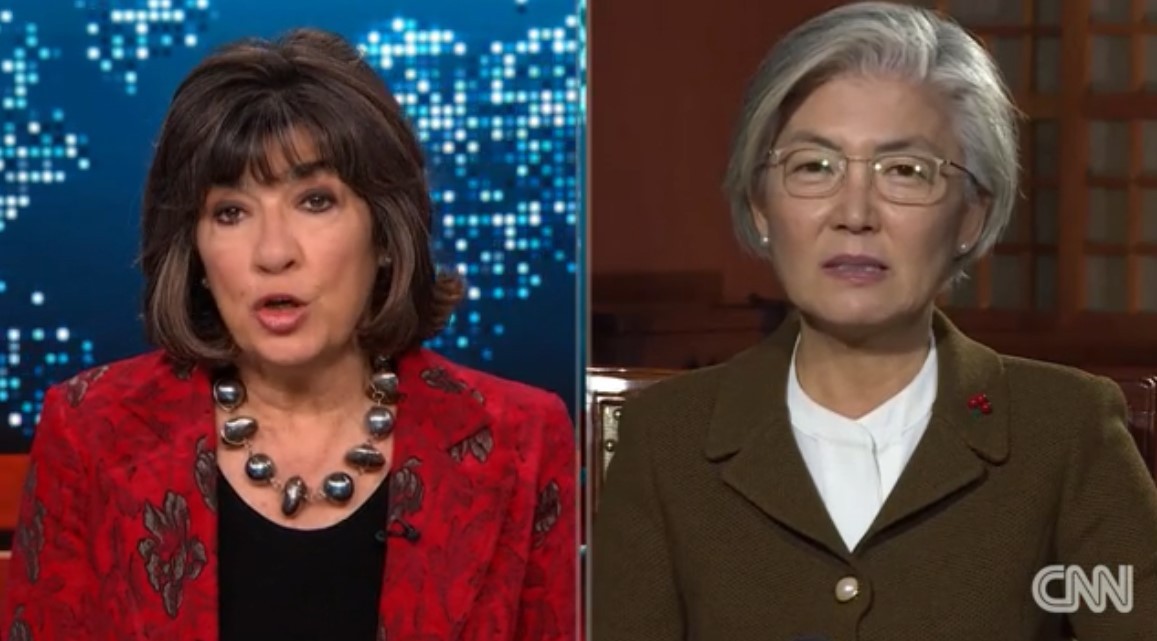 This captured image from the CNN website shows South Korean Foreign Minister Kang Kyung-wha (right) speaking with CNN chief international anchor Christiane Amanpour during an interview. (CNN)
Freedom of expression is not “absolute” and can be limited if it threatens the security of people, South Korean Foreign Minister Kang Kyung-wha said, making a case for the country’s recent passage of a law that penalizes activists sending anti-Pyongyang leaflets across the border.

On Monday, the National Assembly, controlled by the ruling Democratic Party of Korea, passed a bill that imposes punishments of up to three years in jail or fines of up to 30 million won ($27,500) on those distributing propaganda leaflets, flash drives or money into the North, citing concerns over the security of people living in the border area as a reason.

International human rights groups, as well as opposition lawmakers, strongly condemned the move as a violation of the freedom of expression, and said that Seoul is caving into pressure from the reclusive regime to stop the leaflet launches. They also raised concerns that the bill could hamper humanitarian efforts in the North.

“There‘s an argument that this is a restriction on freedom of expression. Freedom of expression, I think, is absolutely vital to human rights, but it’s not absolute. It can be limited,” Kang said in an interview with CNN on Thursday morning.

She argued that the leaflet ban is enforced in accordance with the nation’s obligation under the International Covenant on Civil and Political Rights, and that the bill is “limited in scope” and only imposed when “these acts pose harm or danger to the life and security of our people.”

Kang referred to an incident in 2014 when the two Koreas exchanged fire across their heavily armed border, after Pyongyang attempted to shoot down balloons distributed by South Korean activists, which carried propaganda leaflets condemning the reclusive regime. She also mentioned Pyongyang’s demolition of a joint liaison office in June over the anti-NK propaganda leaflets.

“This is happening in a very sensitive area -- the most militarized zone in the whole world with people living right next to the border area,” she said. “In an area, highly militarily tense area where anything can go wrong, lead to even bigger clashes, and the people living near the border have been asking that these activities stop for years.”

During the interview, she also talked about the COVID-19 situation in the North, casting doubt on the country’s claim that it has zero coronavirus infections on its soil.

“Given that this is a virus that spreads very quickly, and even in countries that quickly closed down, the virus got in and spread, so it’s hard to believe that there aren’t any cases, but that’s the official story,” she said.

Kang also added that Seoul has offered to work together with Pyongyang for containment efforts on the virus, but the North hasn’t responded yet.