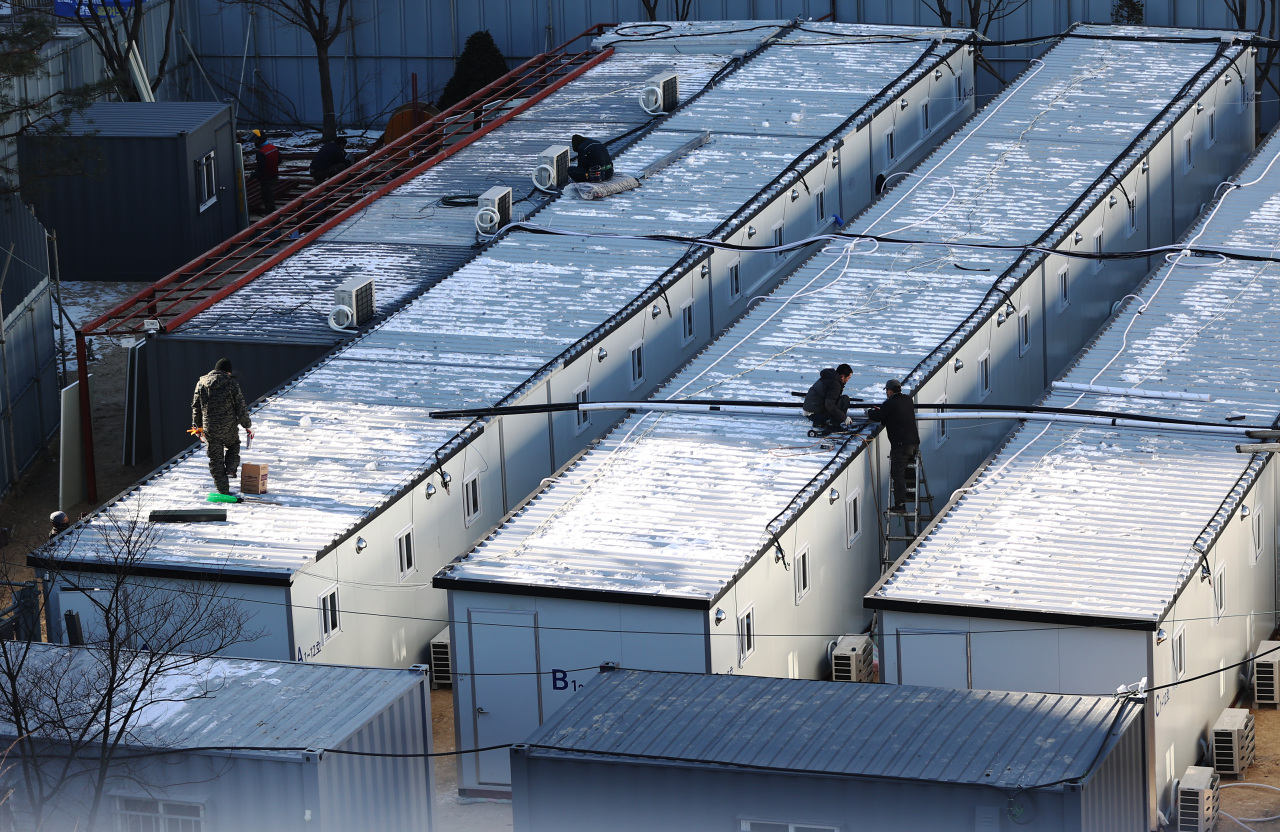 Seoul is setting up COVID-19 wards built from shipping containers in an effort to ease hospital bed shortages. (Yonhap)
Public health officials said Thursday a Seoul resident in their 60s had died while waiting to be admitted to a hospital after a COVID-19 diagnosis, marking the first such case to be reported in the capital since the pandemic began.

They said the patient died at home Tuesday after having waited three days for a hospital bed since testing positive for the virus on Saturday.

“The patient did not exhibit severe symptoms initially -- just an itch in the throat -- and their condition appears to have worsened rapidly. The patient had diabetes but could self-medicate,” a Seoul official told The Korea Herald over the phone.

The patient had contracted the virus at a restaurant in Jong-no, central Seoul, the official said. Further details remained unknown as the case is still being investigated by the authorities.

Significant bed shortages are straining hospitals in Seoul, which has long been Korea’s COVID-19 epicenter, as the city counted a record number of 423 new cases on Thursday.

All of the intensive care unit beds for COVID-19 patients at Seoul hospitals were filled by Wednesday afternoon. None of the “semi-ICU” beds, intended to accommodate patients requiring critical care once ICUs reach full capacity, were available, either.

On the same day, Korea shattered yet another record for COVID-19 deaths and hospitalizations nationwide, the Korea Disease Control and Prevention’s situation report showed.

Twenty-two people died in the 24 hours ending Wednesday midnight, the highest number of deaths from COVID-19 in a single day. The figure comes just two days after the previous record of 13 was set on Monday.

“Increasingly more cases are being confirmed after deaths. This signals high transmission in the community,” a senior offical at the KDCA said during a virtual news briefing, in response to a question about the possible cause of the rise in deaths. There is no evidence of the virus mutating into a more virulent form, he added.

By Wednesday there were 12,209 patients undergoing treatment either at hospitals or nonhospital facilities, of whom 242 are in intensive care -- the highest ever number.

The government claims that Korea’s health care system “still has room to cope.”

Despite no ICU space and the death of a patient who was unable to be admitted to hospital, a senior official at the Ministry of Health and Welfare told reporters in a closed-door briefing Thursday morning, “At the present moment, Korea is not at a point where its health care system is unable to provide appropriate care to patients.”

He said the key considerations for moving on to a stricter social distancing tier were by how far to the limit the contact tracing and health care systems were being pushed. “But Korea’s situation hasn’t arrived at that point yet,” he said, once again arguing against the necessity of toughened rules.

In a text message late Wednesday afternoon, the Health Ministry told reporters the decision for designating the country’s strictest tier of COVID-19 restrictions was “not imminent,” and that it would come “after careful deliberation about the economic costs.”

The number of tests conducted increased nearly seven- to 10-fold to 50,071, after rapid antigen kits began to be allowed for use to diagnose COVID-19 this week. The rapid antigen tests are able to return results within 30 minutes but present lower sensitivity and specificity compared to the RT-PCR, which is considered the “gold standard” for COVID-19 testing.