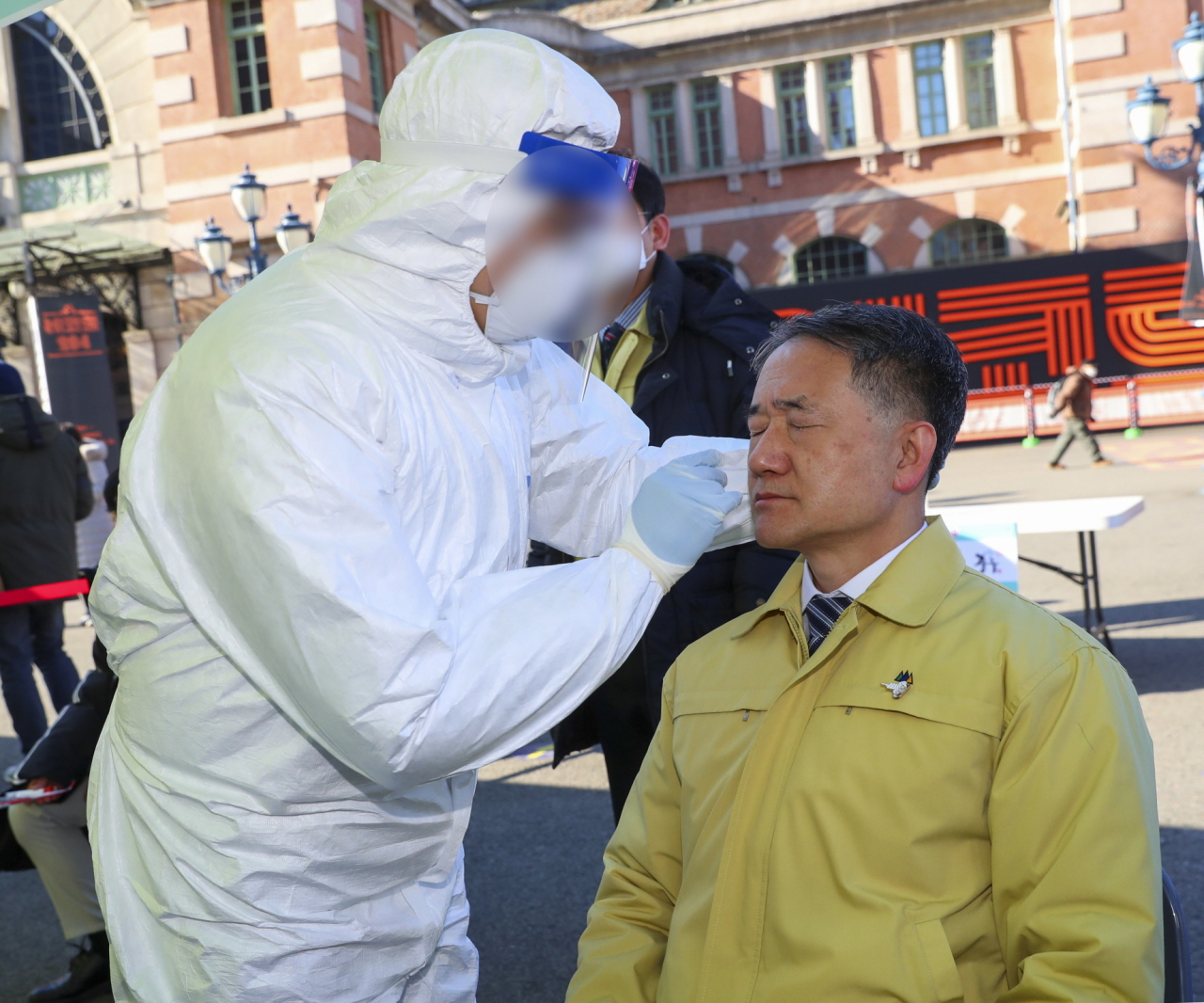 Minister of Health and Welfare Park Neung-hoo gets a nasal sample collected for a rapid antigen test, which is now being used in Korea to diagnose COVID-19, at a newly installed testing booth outside Seoul Station in the center of the city. (Ministry of Health and Welfare)
Korea recorded a new daily high of 1,078 cases Wednesday, according to the Korea Disease Control and Prevention Agency’s situation report, bringing the cumulative number of official cases to 45,442.

This is the third time in December that a new daily case record has been set. Korea saw a record number of 950 new cases on Saturday. On Sunday, the number reached 1,030 cases, another record.

Twelve more deaths were announced Wednesday. Thirteen deaths, the highest ever in a single day, were reported the previous day. So far this week, 32 people have died of COVID-19. The death toll is now 612.

Intensive care unit hospitalizations are also at an all-time high, even as guidelines have been revised to discharge patients faster. Currently, there are 226 severely or critically ailing patients in ICUs. Only one ICU bed for COVID-19 patients was available in Seoul as of Tuesday afternoon.

A series of nursing home outbreaks threaten a further surge in hospitalizations. At least 335 residents at nursing homes in Gyeonggi Province, South Chungcheong Province and Ulsan have tested positive for the disease as of Tuesday.

Prime Minister Chung Sye-kyun hinted at a “near-lockdown” in a government meeting Wednesday morning. “That may be coming and we need to get ready for that beforehand,” he told ministries.

Yoon Tae-ho, a senior official at the Ministry of Health and Welfare, said in a news briefing held the same day that Korea, having averaged between 800 and 1,000 cases per day over the past week, qualified for the strictest tier of its social distancing system.

“Before tightened rules can come into effect, a societywide consensus appears necessary. We are talking about rules that are akin to a lockdown,” he said, citing damage to the economy, especially small businesses.

The top social distancing tier, if implemented, limits indoor gatherings of more than 10 people, religious services, in-person classes at schools and operations of businesses that are 300 square meters or larger. Wearing face masks becomes mandatory even in outdoor settings where putting a 2-meter distance between people is difficult. Food outlets including pubs and bars can stay open until 9 p.m., after which point only to-go orders are permitted.

But public health officials are urging against all nonessential activities, asking people to stay home as much as possible, without enforcing orders.

Experts call for swift action, arguing that delayed implementation will result in the measures having to last longer to bring down the infections to a manageable level.

“It appears the government does not have a scheme ready for protecting struggling businesses and vulnerable workers, in the event lockdown-level restrictions are necessary. These worst-case scenarios should have been thought out in advance so that the right measures can come at the right time when such situation presents itself,” infectious disease specialist Dr. Kim Woo-joo said in a phone interview.

“Time and time again the government is putting off decisions at critical junctures of the pandemic on account of the economy. But hospitals around the country are already overwhelmed, and if the trend continues to get worse, patients can no longer be sure of receiving the care that they need,” he said. “If we could pay people to stay home while intensive measures last, this wouldn’t be a problem.”

In a response to The Korea Herald’s inquiry, Yoon of the Health Ministry said the government “recognizes the need for compensating small business owners.”

“We will work with other ministries to minimize the tolls of social distancing on small businesses,” he said, without giving details of possible assistance.

In efforts to ramp up testing, Korea is setting up dozens of additional testing sites around Seoul and deploying diagnostic tools such as rapid antigen kits that were formerly barred from use due to relatively low sensitivity and specificity. Sensitivity refers to a test’s ability to correctly identify patients with a disease, and specificity is its ability to correctly identify people without the disease.

The guidance on who should be tested has also been updated. Between now and Jan. 3, anyone who wants a test can get tested. Previously, only people who had been exposed to a patient or were experiencing symptoms were eligible for a test -- which was heavily criticized by experts as overlooking a high proportion of asymptomatic infections in COVID-19.

To speed up the turnover of beds, the government has ordered 11 state-run hospitals to discharge non-COVID-19 patients to make room for COVID-19 patients. “Semi-ICU” beds have been installed for patients who are released from ICUs sooner than they would have been in a normal setting, but are still in need of critical care.