The following is the last article in a four-part series on how Korea is creating a new normal during the pandemic, produced in partnership with The Korea Foundation -- Ed. 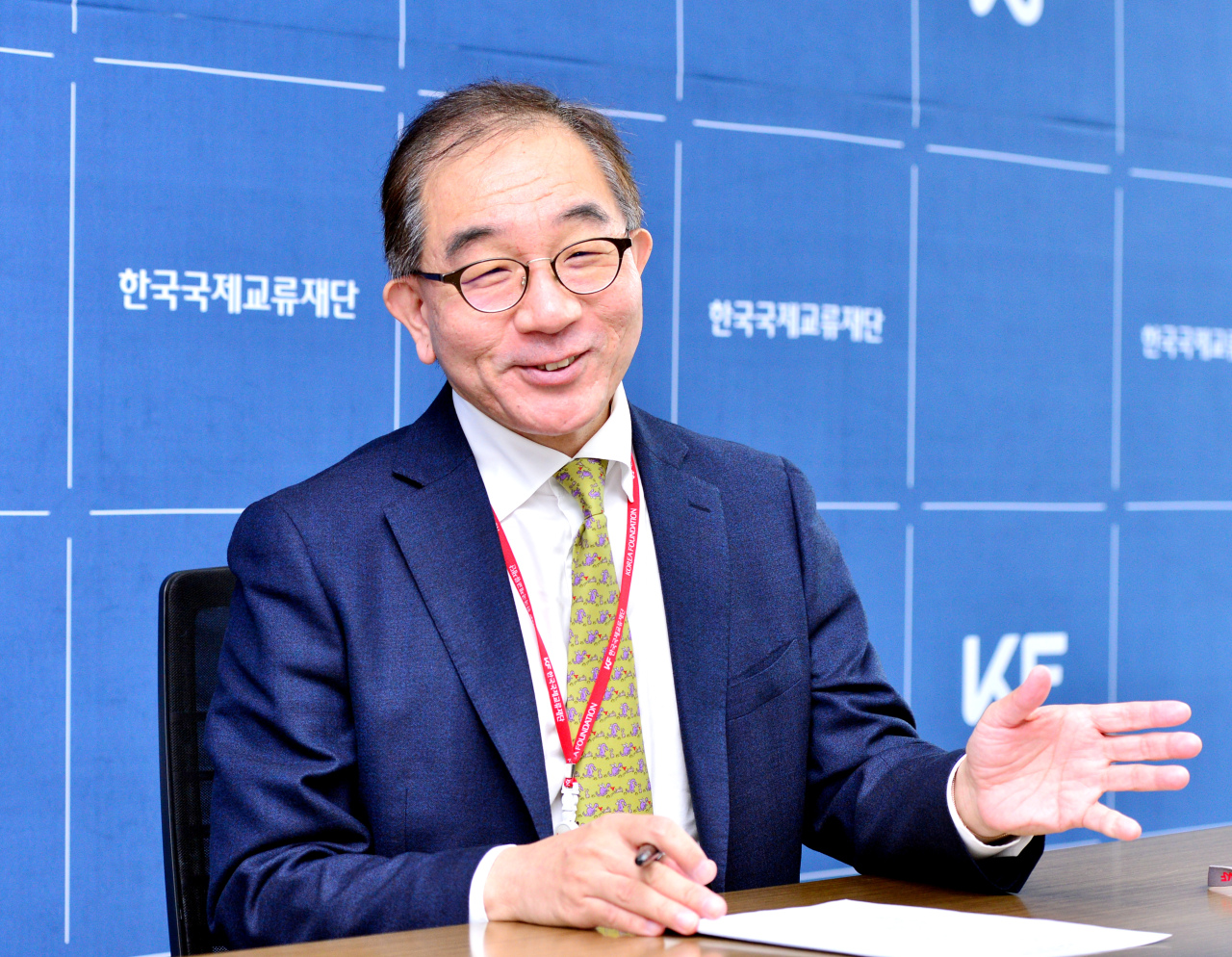 KF President Lee Geun speaks during an interview with The Korea Herald at his office in Euljiro, central Seoul on Dec. 2. (Park Hyun-koo / The Korea Herald)
Since the beginning of the year, the whole world has been desperately navigating through the COVID-19 pandemic, the worst public health crisis in our generation.

According to Korea Foundation President Lee Geun, Korea may make a breakthrough with its response to the virus pandemic, backed by the people’s trust in the public sector.

“It is a matter of the public sector,” Lee said during an interview with The Korea Herald held at his office in Euljiro, central Seoul on Dec. 2.

“Korea, along with countries like Taiwan and Japan, is a country where the public sector functions well. The public sector made the infectious disease prevention and control system work with responsibility,” Lee said.

“Korea’s public sector is efficient, responsible and less corrupt compared to many other nations in the world. This encourages the people to cooperate with the government’s measures in coping with the virus crisis,” he explained.

Though Korea is currently grappling with a third wave of infections, it has received international attention this year for fighting the virus with innovative, effective ways such as an extensive test-and-trace, strict quarantining, tracking application and drive-through tests.

Lee also cited the characteristics of Koreans as contributing positively toward battling the virus pandemic.

“In Korea, people have a strong community-oriented mind. The private sector (or individualism) was late to develop here. Also, Korea is experienced in leading collective actions, such as the democratization movements (in the late 20th century),” he said.

The international relations expert highlighted the standards for an advanced country status may change after the pandemic as so many of the advanced nations showed rather “disappointing responses” in handling the virus crisis.

“In the future, we will need to work on branding Korea as an advanced country under a new definition. We learned through the COVID-19 pandemic that previous standards of an advanced nation, such as the gross national income per capita, may not always guarantee the level of infectious disease prevention and control system,” Lee said.

“If the disease prevention system works, the economy runs better and the culture sector can function properly, too. Countries with transparent public sectors will be the advanced nations in the future, guaranteeing people’s safety and health,” he said.

Though Lee remains optimistic, the virus pandemic took its toll on the Korea Foundation, a public diplomacy arm of the Ministry of Foreign Affairs, as well. The Jeju Island-based foundation had to cancel planned events and turn to virtual platforms to communicate with its target international audience.

“Of course, things did not go as planned. The uncertainty was difficult. Everything was postponed and canceled,” Lee said.

“But we were fortunate. When COVID-19 first began to spread, we thought it was a disaster, the end of public diplomacy. But Korea responded well to the crisis, creating an open model of infectious disease prevention and control. It became a silver lining,” he said.

As part of the digital promotion strategy, the KF hosted numerous webinars this year, discussing the impact of the COVID-19 pandemic, Korea’s response to it, and the related innovations in various sectors.

“The public diplomacy is about forming networks and spreading contents. Through the webinars, we were able to spread our contents to the whole world, unlike the offline events which have relatively limited audiences,” he said.

“Also, it is possible to watch them again as they are recorded. I think we will operate under a two-track system even after the pandemic, promoting public diplomacy both online and offline.”

Though the year of 2020 has been an unexpected, turbulent one for everyone, Lee believes Korea can take one step further in public diplomacy with its coronavirus response system.

“The disease control system became a valuable asset of our public diplomacy. We have been preparing to go digital in recent years as going digital is the trend. It just became more full-scale,” he said. “It was not a bad year after all.”